Private investors who traded on expectations of a “Boris bounce” were rewarded on Friday morning when shares in domestic-facing UK companies surged following the decisive Conservative election victory.

Shares in the utilities sector responded strongly as the threat of Labour’s nationalisation plans evaporated, but investors were also betting that the result would be positive for UK banks, retailers and builders — with double-digit share price rises for Taylor Wimpey, Berkeley Homes, Persimmon, the Royal Bank of Scotland and SSE.

“The UK is cheap, at a 12.5 per cent discount to Europe versus a 3.5 per cent 20-year average, and will re-rate on the back of this outcome,” said analysts at Jefferies. It has buy recommendations on 14 UK stocks that it considers cheap compared with European peers, including Cineworld, Kingfisher, OneSavings Bank, Aviva, Associated British Foods and Centrica.

Data from the UK’s biggest share trading platforms showed that private investors were keen to trade — with many looking favourably on UK stocks. Interactive Investor reported that trading levels were four times higher than usual for a Friday morning. This suggested that the “wall of cash” built in the three years since the referendum is finally being put to work, the platform said. Over this period, the average amount of cash held by Interactive Investor clients has doubled.

The number of currency trades at Hargreaves Lansdown, another investment platform, were up by more than 211 per cent on Friday morning as investors sought to take advantage of sterling’s 19-month high. Meanwhile, the top three viewed shares on the Hargreaves platform were Lloyds, BT and Aviva, with Barclays, National Grid, Legal & General, Tullow Oil and Sirius Minerals also in the top 10 most viewed.

“Now that the spectre of nationalisation has been banished, Centrica, SSE and United Utilities have bounced as much as 10 per cent — rewarding those brave shareholders who backed them through the Corbyn manifesto threat,” said Emma Wall, head of investment analysis at Hargreaves Lansdown.

It was a similar picture at rival platform, the Share Centre, where the top three traded shares were Lloyds, Legal & General and National Grid. Other companies to make the top 10 were Diageo, Taylor Wimpey, Royal Bank of Scotland, SSE, Barratt Developments, Tullow Oil and Tesco.

Analysts at Jefferies said the majority win was positive for housebuilders and the construction sector, predicting that new housing commitments and the continuation of Help to Buy until 2023 “should be reflected in further upside in valuations, particularly of dividends” for the housebuilders. 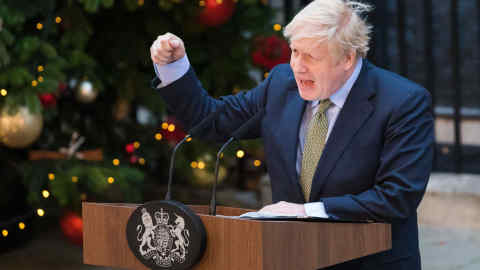 Other fund managers were less bullish about the prospects for large-cap stocks.

Louise Dudley, global equities portfolio manager at Hermes Investment Management, said that although the election outcome was broadly positive for FTSE stocks, it was “not as promising for international names such as the miners and blue-chips”, and noted the possibility of a “mini post-Brexit recession after UK GDP posted disappointing numbers this week”.

Property market experts said the emphatic result for the Conservatives was likely to bring back sellers and buyers who had held off amid political uncertainty over Brexit and the election.

Liam Bailey, global head of research at estate agent Knight Frank, said the result would “pave the way for the release of some of the pent-up demand that has built up in property markets in recent years”.

More homes were likely to appear on the market as the Conservatives put their plans for economic stimulus into action, he said, although buyers and sellers would also readjust their price expectations.

“This will put downward pressure on prices. However, some vendors may expect a bounce in prices, which may create a stand-off between buyers and sellers as the market re-prices,” he said.

Low mortgage rates, combined with political stability, are expected to produce a “sharp uplift in transaction levels” starting early in 2020, according to Andrew Montlake, managing director of mortgage broker Coreco. “The fact that borrowing costs are ultra-low gives people even more reason to buy and sell.”

However Lucian Cook, residential research director at estate agent Savills, said that while political clarity had been gained in the short term, some uncertainty would continue to cloud the economic outlook until a trade deal was agreed with the EU. “This could mean a bounce in demand in the first part of 2020 proves difficult to sustain through the summer months and into the autumn market.”

During the campaign, the Conservatives said they would impose a 3 percentage point stamp duty land tax charge on non-UK resident buyers if elected. This would come on top of the 3 percentage point surcharge paid by second home and buy-to-let purchasers since 2016.

Mr Cook said some of these buyers would act quickly to get ahead of any moves on the surcharge. “We think this is likely to support demand from overseas buyers in the short term as they seek to buy before it is imposed.”

Although the next Budget is not expected until early February, the Conservatives have promised not to increase individual taxes — including rates of income tax, national insurance or VAT — for the next five years.

The party has pledged to raise the national insurance threshold from the current £8,632 to £9,500. Its ultimate ambition is to raise the threshold to £12,500 — although no timeframe for this has been set.

Meanwhile, a planned increase in the inheritance tax allowance, which stood to be scrapped under Labour, will remain. This will allow a couple pooling their tax allowances to pass on a family home worth up to £1m to the next generation free of tax by 2020-21.

The government came under immediate pressure to go further on its election pledge to conduct an “urgent review” of the tapered annual allowance for NHS staff within 30 days of being elected.

The British Medical Association urged the government to reform pension tax, as a review of the taper was “not enough”.

“We are absolutely clear that the only way to solve the problem is immediate and fundamental taxation reform . . . removing the taper and annual allowance for defined benefit schemes such as the NHS Pension Scheme,” the BMA said.

“Our message to the government is clear: this must be included in their first Budget and we are requesting an urgent meeting with the chancellor to discuss this.”