Does State Street need a deal to save its ETF business?

Is Nelson Peltz on the verge of a deal to create a rival to challenge BlackRock and Vanguard, the world’s two largest asset managers?

The veteran activist investor acquired a stake in Invesco last year through his fund Trian Partners, and immediately started discussing “strategic combinations” with the leadership of the $1.5tn Atlanta-based investment manager.

One tantalising combination stands out: a marriage between Invesco and State Street’s $3.9tn asset management business. Talks between the two are ongoing, according to one person briefed on the matter, but the barriers to a deal are high.

State Street played a critical role in the early development of the exchange-traded fund industry, launching the first US-listed ETF in 1993. Known as SPY, it has since accumulated assets of $400bn and become one of the world’s most widely traded securities.

The ETF industry now controls assets of $9.7tn but State Street Global Advisors has long since surrendered its early lead to BlackRock and Vanguard, which have benefited from the massive shift to low-cost index-tracking funds over the past decade.

As State Steet’s ETF business languishes in third place, industry watchers are asking if it might be persuaded to sell its asset management arm. And if it cannot find a deal, what is it going to do?

Mergers and acquisitions have accelerated across the investment industry in recent years driven by downward pressure on fees and spiralling costs.

The disclosed value of M&A deals involving investment managers reached $38.9bn last year, the highest since the financial crisis, according to the investment bank Piper Sandler. And assets worth $1.6tn have already moved between managers in the first eight months of this year, compared with $2.9tn over the whole of 2020.

On paper, combining Invesco, a distant fourth in the ranking of ETF providers, with SSGA is the type of deal that excites activist shareholders and Wall Street’s M&A machine.

“Combining their resources would create a $1.6tn ETF business with a global markets share of 16.1 per cent, which owns the world’s largest equity ETF, the biggest gold ETF and the largest technology ETF,” said Deborah Fuhr, the founder of ETFGI, a data provider.

Peltz has already tried to prise away the ETF business — Trian owned a stake in State Street between early 2010 and 2013 but its push for a sale of SSGA eventually failed — and there is no guarantee that he will have more luck this time.

Marty Flanagan, Invesco’s chief executive, knows how painful asset management mergers can be, having only just digested the $5.7bn acquisition of smaller rival OppenheimerFunds in 2018, which was followed by hefty outflows and a slide in profits.

“These large transactions have a terrible record. There are cultural risks as well as operational challenges . . . State Street clearly wants to do a deal but it’s not clear whether Invesco is the right partner,” said one dealmaker close to the talks.

It is also unclear whether Invesco’s long-term profitability would be strengthened by acquiring low-margin ETFs which make up the bulk of State Street’s investment business, according to KBW, a New York-based investment bank.

“We don’t believe that a transaction would meaningfully enhance Invesco’s competitive positioning in the industry’s key growth segments including alternatives, fixed income, global equities and solutions,” said Robert Lee, an analyst at KBW.

KBW estimates that Invesco could need to spend $4.2bn in cash to buy SSGA and that State Street would need to cough up $24bn if it wanted to try to acquire Invesco.

State Street has held talks with several other rivals, including UBS, which want to buy the business outright, according to two people briefed about the matter.

State Street, however, would prefer a partnership or joint venture to an outright sale, something Lee says would be “rife with complexities” and make cost savings more difficult.

The path to a deal is made even more complicated by State Street’s role as one of the biggest providers of essential fund services to asset managers, which also provides the bulk of its earnings. 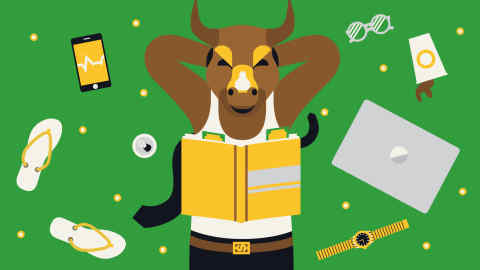 This role has constrained the ability of State Street’s investment arm from competing aggressively in the cut-throat ETF price war because that involves the parent bank in direct competition with its fund servicing clients. Buying Invesco or agreeing to an ETF joint venture would only increase that conflict.

“Everyone knows State Street for its ETF franchise, but the bulk of its revenues are from the custody side,” said Kyle Sanders, analyst at Edward Jones.

The broker estimated that selling fund and custody services, which involves the safeguarding and administering of assets for institutions, accounted for 46.2 per cent of State Street’s total revenues in the first half of this year. Just 16.2 per cent of the first-half revenues came from State Street’s own investment management operations.

The custody business is also growing after State Street announced a $3.5bn acquisition of Brown Brothers Harriman’s Investor Services business last month. That will make State Street the largest global provider of custodial services, moving ahead of BNY Mellon, with its current tally of $31.9tn boosted by $5.4tn of assets from BBH.

If talks fall through, State Street’s top management will be working on a plan B, said Amin Rajan, chief executive of Create Research, a London-based consultancy: “It has the size and reach to remain a big player but it needs a sharper focus on costs, product innovation and client service standards.”

The problem is that, if no deal can be agreed, then both State Street and Invesco could be left pondering a future as perpetual also-rans next to Vanguard and BlackRock — and this prospect might force their hands.