A guide to where the biggest risks lie as lockdowns ease

Michael Peel in Brussels and John Burn-Murdoch in London

The lifting of lockdowns is posing an urgent question for people emerging warily back into society: where are they most at risk of contracting coronavirus?

The dangers vary greatly with activity and it is not always clear that members of the public, or indeed the authorities, are gauging the hazards accurately, say experts.

While there is no such thing as a safe way to come into contact with potentially infected people or environments, research points to some general principles to bear in mind.

Three key factors determine risk of exposure: proximity to people; duration of exposure; and how confined the environment is. The greatest peril lies where the three overlap.

“The biggest risk is being in close proximity to someone in an indoor space for any extended period of time,” said Jeremy Rossman, honorary senior lecturer in virology at the University of Kent.

The perception of risk and the actual scientific risk have sometimes diverged, he noted. “I don’t think that’s been very clearly communicated.”

Indoor settings are generally more hazardous than outdoors, according to studies and experts — and perhaps more than has been widely understood.

“The environment matters a lot,” said Muge Cevik, a clinician and researcher in virology at the University of St Andrews. “If you do the same gathering indoors as outdoors, the indoor version will be much more high risk.”

The main reason is obvious: the respiratory droplets thought to carry the virus have a much greater opportunity to disperse harmlessly outside, particularly if there are breezes to carry them away.

So while passing someone in the street can bring you within 2 metres of another person, the risk is thought to be very low because the exposure time to any clouds of virus they produce is minimal.

The same arguments suggests people should not be overly concerned about passing cyclists and runners, whose heavy breathing has caused plenty of wincing in parks and on trails.

The exercisers may expel more air more forcefully, but their speed of movement makes the contact time still smaller — and also has the effect of dispersing their droplets over a larger area. They should still try to keep their distance as much as possible.

Big outbreaks on ships including cruise liners and US and French aircraft carriers have underlined just how contagious coronavirus can be during extended close exposure in cramped conditions.

The minimum physical distancing required between people is a topic of intense debate. Some governments have reduced their recommendations to below 2m or are coming under pressure to do so to facilitate an economic restart. A study published in The Lancet journal last week said distancing policies of 1m or more seemed to be “strongly associated with a large protective effect” while distances of 2m “could be more effective” still.

Initial contact tracing studies from China and France suggest households are the most infection-prone everyday environment, followed by public transport and restaurants — though more work needs to be done to be certain.

Contagion in those studies was found to be lower in environments such as workplaces, schools and healthcare settings, where the proximity between people tended to be less or the contact time shorter.

Ventilation also appears to play a role, unsurprisingly, with lack of circulation of air from the outside increasing the risk.

Some initial evidence suggests air conditioning systems can play a role in spreading the disease in closed environments by recirculating infected air. If this is so, well-maintained systems that bring in fresh air and have high-quality filters are more likely to reduce transmission risk.

One lesson is: don’t linger in shops, especially small ones, or other confined environments for any longer than necessary.

Another is that if you want to drink or dine in reopening bars and restaurants, then outdoors is better than in — and, if you have to be inside, then sit by an open window if you can.

Many offices may also need to be redesigned, with bans on practices such as hot-desking — and the introduction of partitions in environments where distancing is hard.

“Screens to above mouth level would probably help in an open plan office,” said Keith Neal, emeritus professor of epidemiology at the University of Nottingham. “The bigger question is: why would you be in an office?”

Masks and other measures

Many European countries have followed Asian counterparts in deciding that masks can be useful.

They are likely to have most value in high-risk indoor environments, where they can block the spread of respiratory droplets from wearers’ noses and mouths.

Scientists say donning masks for walking around town is less helpful because the risk of infection is low. It may even be counterproductive in cities such as Brussels where masks are compulsory on some streets but not others, as people may take them on and off repeatedly and risk transferring the virus to their hands each time.

Health authorities generally do not recommend wearing gloves. But experts cite two other good practices that have remained relevant since the earliest days of the pandemic: don’t touch shared surfaces any more than you have to (such as buses and trains), and make sure you wash your hands before and after if you can.

Growing evidence that “superspreaders” may be an important feature of the Covid-19 pandemic is giving policymakers pause for thought. It explains why many authorities have designated large gatherings such as concerts and festivals as among the last to restart — and why they should be approached with caution once they are permitted.

Germany’s Bundesliga football league has restarted without crowds and English football will follow suit next week. Big events such as the UK’s Glastonbury festival in late June and Oktoberfest in Munich have been cancelled.

Incident reports suggest single individuals have the potential to spread infection significantly. Research from Hong Kong and mainland China on infected individuals found that a fifth of them were responsible for four-fifths of the total further cases.

The contagion effect can be pronounced at mass events. After a 2.5 hour choir practice in Washington state in March that included one symptomatic person, 52 of the other 60 attendees developed confirmed or probable Covid-19.

“We all congregate together — that’s human nature,” says Dr Cevik at St Andrews. “And this is the best kind of environment for this kind of virus to spread.” 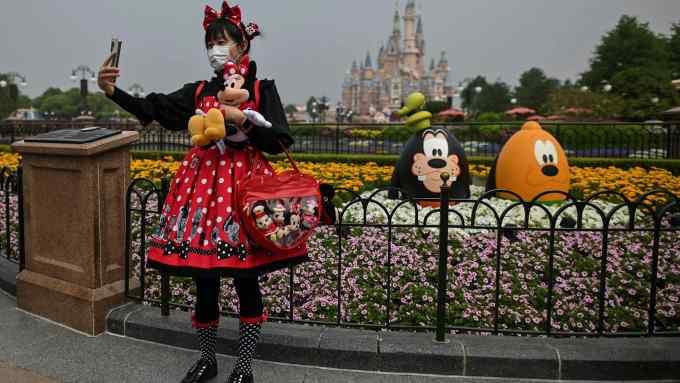