US president claims win for both sides but proposals enrage Palestinians

Katrina Manson in Washington and Mehul Srivastava in Tel Aviv

Donald Trump said on Tuesday that his long-delayed Arab-Israeli peace plan would lay the foundations for “a realistic two-state solution”, but it appeared to require the Palestinians to give up key negotiating positions they have fought for over the past three decades.

Setting the tone for a plan weighted in favour of Israel, the US president said Jerusalem, the holy city, would be the undivided capital of the Israeli state. David Friedman, US ambassador to Israel, later told reporters that a “meaningful portion” of the occupied West Bank would also be allocated to Israel, including the Jordan Valley.

“Today Israel has taken a giant step toward peace,” Mr Trump said as he unveiled the plan at the White House, flanked by Benjamin Netanyahu, Israel’s prime minister. “My vision presents a win-win opportunity for both sides, a realistic two-state solution that resolves the risk of Palestinian statehood to Israel’s security.”

He said the proposals would more than double Palestinian territory, but did not provide details how that would work in practice. He said the Palestinian authorities would have four years to meet US-set conditions of statehood, during which Israel committed not to develop the land allocated for a future state.

He added that the Palestinian capital would be in eastern Jerusalem, but did not state where. Mr Netanyahu said it would be in Abu Dis, a suburb separated from the holy city by an Israeli security barrier.

According to a draft plan published in Israeli media, the Palestinian state envisioned by Mr Trump would mean the Palestinians would have to place their capital outside the municipal boundaries of present-day Jerusalem and would be largely landlocked and bifurcated by Jewish settlements.

The status of Jerusalem is one of the most contentious issues at the heart of the Israeli-Palestinian conflict. While Israel considers the holy city its undivided capital, Palestinians see East Jerusalem as their future capital.

Palestinian leaders have refused to talk to US officials since Mr Trump announced in December 2017 his decision to move the American embassy to Jerusalem. They have previously said they would reject the plan. The details announced on Tuesday further inflamed their anger and will fuel allegations that Mr Trump is pursuing a pro-Israeli bias.

Palestinian leaders have previously negotiated on so-called final status issues, including the future of Jerusalem, the right of refugees to return and the issue of land occupied by Israel in the 1967 war.

You [Trump] are recognising Israel’s sovereignty over all Jewish communities in Judea and Samaria, large and small alike

The plan said Israel would not be required to accept the return of any Palestinian refugees, but those living outside the borders of a future Palestinian state would be allowed back subject to limitations that the proposal did not spell out.

Mahmoud Abbas, the Palestinian president, described the plan as a “conspiracy”.

“I say to Trump and Netanyahu: Jerusalem is not for sale, all our rights are not for sale and are not for bargain. And your deal, the conspiracy, will not pass,” Mr Abbas said in a televised address in Ramallah in the West Bank.

He said he was prepared to negotiate with Palestinian leaders, but the prospect of talks appeared remote.

Israel’s security cabinet is scheduled to meet on Sunday, and could make a decision to annex the Jordan Valley and other settlements considered illegal under international law into Israeli territory.

Mr Trump’s previous actions over the past two years — including his recognition of Jerusalem as Israel’s capital and accepting Israeli claims to sovereignty over the occupied Golan Heights, which Israel captured from Syria in the 1967 war — had already infuriated Palestinian leaders and crushed their hopes of a viable two-state solution. 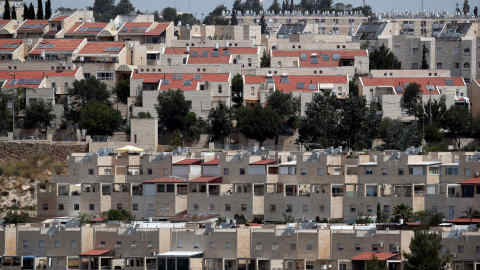 Dennis Ross, a former senior state department official who led Middle East peace efforts under both Republican and Democratic administrations, said the “tell-tale indicator” of whether the vision might have any possible future would come from the Arab response.

Two Palestinian officials close to prime minister Mohammed Shtayyeh said their concern was also whether Arab countries such as Egypt or Saudi Arabia, which have forged close ties to the Trump administration, will try to pressure the Palestinians to engage with the plan.

A Saudi official said the kingdom is likely to look for positives in Mr Trump’s plan, but that it would ultimately be up to the Palestinians to decide how to respond, adding that Riyadh would not seek to strong-arm Palestinian leaders.

However, in a sign of likely Egyptian pressure on the Palestinians to accept Mr Trump’s plan, Cairo said it was important to give consideration to “the US administration’s initiative”. A foreign ministry statement urged both sides to carefully study “the US vision for peace” and to open channels for dialogue to resume negotiations.

Ayman Safadi, Jordan’s foreign minister, warned “against the dangerous consequences of unilateral Israeli measures, such as annexation of Palestinian lands, the building and expansion of illegal Israeli settlements on . . . occupied lands and encroachments on the Holy Sites in Jerusalem, that aim at imposing new realities on the ground”.

Israeli settlements in the occupied West Bank, which includes East Jerusalem, are home to more than 500,000 Israelis living under Israeli military rules. The towns are considered illegal by most of the world, except for the US, which recently reversed its longstanding policy on their legitimacy.