The new chairman of Aston Martin said the company needed to restart its factories as soon as possible as the troubled luxury carmaker completed a £540m fundraising.

Lawrence Stroll, the Canadian billionaire who led a consortium of investors in a rescue bid and rights issue, said he would “reset” the business over the coming 12 months, with the aim of making it “one of the pre-eminent luxury car brands in the world”.

Following an investment by Mr Stroll for a 25 per cent stake in the business, Aston on Monday said it had raised £357m through placing 1.2bn shares in a rights issue, with 2 per cent of investors declining to take up their rights.

A placing by the banks early on Monday of the remaining 24m shares led to the final 2 per cent being sold at 58p a share to raise an additional £14m.

Shares fell 5 per cent to 55p by late afternoon trade on Monday.

Mr Stroll’s investment, the latest injection into the business since its disastrous initial public offering, means Aston will delay releasing electric cars and focus on Formula 1 and supercars to rival Ferrari.

“Our most pressing objective is to plan to restart our manufacturing operations, particularly to start production of the brand’s first SUV DBX and to bring the organisation back to full operating life,” Mr Stroll said on Monday.

Aston shut its facilities at Gaydon and St Athan in March to contain the spread of the coronavirus outbreak.

Some factories in Europe have begun reopening, with Volvo Cars, Renault and Toyota among groups firing up plants again and imposing safety measures to try and protect staff or separate them from co-workers.

None of the UK plants have yet reopened since ceasing production last month.

Mr Stroll said the Aston sites would reopen “in a way that ensures we will protect our people, wherever they work”, though he did not offer a specific timeline.

Deliveries of the Aston Martin DBX, which were expected to start in the summer, are crucial to the business.

The car, the first sport utility vehicle Aston has made, is important to widening the customer base and growing in China, as well as bringing in fresh revenues as sales of its core models decline. 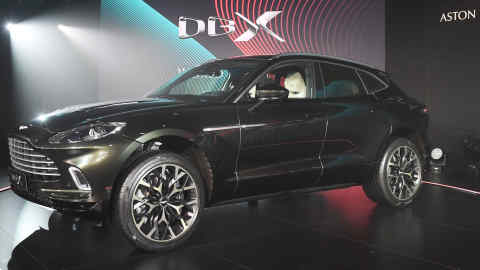 Last summer the company admitted it had too many cars tied up in dealer showrooms, leading to a stinging profit warning.

“Alongside the return to production, we will be undertaking the necessary rebalancing of supply to demand for our core models,” Mr Stroll said. “In the months ahead, as the world starts to emerge from the Covid-19 pandemic, we will start to reinvigorate our marketing initiatives to continue to build our order book.”

The company will also “continue to focus significant effort and investment into the continued development of our range of mid-engined cars”, which are “a crucial next stage in the expansion of our product line-up”, he said.

A “process to identify and appoint new independent non-executive directors is under way”, Mr Stroll said.