Big investors have cut their allocations to equities to the lowest level since the collapse of Lehman Brothers at the height of the global financial crisis as rising recession fears spark worries about corporate profits.

Fund managers this month reduced their net overweight position in stocks to the lowest level since October 2008, while also boosting cash holdings to a 21-year high of 6.1 per cent of assets under management, a survey by Bank of America of 259 investment managers with combined assets of $722bn published on Tuesday showed.

The study highlights how even after global markets posted their worst first half of a year in five decades — with the FTSE All-World barometer shedding 21 per cent — many asset managers remain deeply uneasy.

Michael Hartnett, chief investment strategist at BofA, said investors had reached a “dire level” of pessimism as they worry that a global tightening of monetary policy could spark a broad growth slowdown. He added that a higher share of fund managers — a net 79 per cent — expected corporate profits to deteriorate than at any point during the coronavirus pandemic or when Lehman Brothers collapsed in September 2008.

Larry Fink, chief executive of the world’s largest asset manager BlackRock, offered a similar take last week, when he said anxieties about the impact of high energy prices and rapid increases in interest rates by central banks on economic growth and company profits were hitting both stocks and bonds.

A net 58 per cent of BofA’s survey respondents said they were taking lower than normal levels of risk in their portfolios with allocations to US defensive sectors, such as healthcare, utilities and consumer staples, which are seen as less vulnerable in a recession, reaching their highest level since May 2020.

Over the past four weeks, fund managers have also been rotating out of eurozone equities as well as banks, energy stocks, materials and commodities and into defensive sectors and bonds.

One-third of the investors said that inflation remaining high was their biggest concern, while just under a quarter cited a recession as the biggest risk. 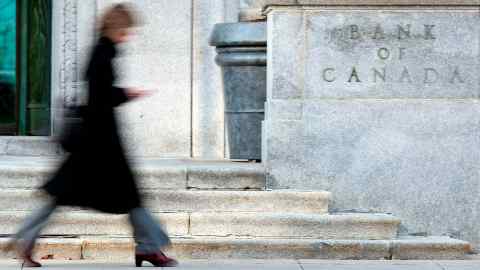 The US central bank is seen as unlikely to pivot away from tightening monetary policy until its preferred measure of “core” inflation, as measured by the personal consumption expenditures price index, which was running at an annual rate of 4.7 per cent in May, eases back to less than 4 per cent, according to the survey’s respondents.

Hartnett said that investor sentiment was now so bearish that a short-term bounce for stocks and credit was possible.

“Any rally is likely to be temporary. The catalyst for a sustained recovery will be a change in monetary policy from the Fed when it sees that Main Street is suffering along with Wall Street. We are still some distance from the kinds of levels on the [US S&P 500 stock index] that would cause policymakers to panic and change course,” he said.

Get alerts on Asset allocation when a new story is published