Colombia’s new leftist government is seeking to require environmental licences for mining exploration as part of a wider overhaul of the process for awarding concessions, according to the country’s environment minister.

“We plan to regulate the licence for exploration, especially those that are on a large scale,” Susana Muhamad, the minister, told the Financial Times. In cases where exploration would take place on indigenous lands, a prior consultation would be required, she added.

“It is important to do so as there has been a lot of social and environmental conflict due to exploration and this would reduce that.”

Muhamad said that the government would also evaluate existing mining titles that were awarded without appropriate environmental scrutiny.

“We have to review all the mining titles that have been issued and especially in areas that are systemically important, strategic and vulnerable, and make substantive decisions on that title.”

Companies operating in Colombia only need environmental permission for the extraction and production phases of projects, though such investor-friendly arrangements are viewed by the government as putting the environment at risk.

“There is laxity, and compliance is very flexible,” Muhamad said. “I think we have to be as strict as possible.”

Colombia is Latin America’s largest coal producer, boasts significant deposits of emeralds, gold and nickel, and has aims to become the world’s third-largest copper producer. In 2021, mining exports made up 24 per cent of the country’s total exports and 2.3 per cent of gross domestic product, according to the mining and energy ministry.

But since Colombia’s first leftist president, Gustavo Petro, took office on August 7, the mining sector has had reason to be concerned. Petro campaigned on a platform of environmental justice and pledged to halt oil and gas exploration, though he has backtracked on that policy. He has repeatedly pledged to oversee Colombia’s transition away from fossil fuels.

His ambitious tax proposal, which seeks to raise funds for social programmes, includes a 10 per cent windfall tax on oil and coal exports when prices exceed $48 per barrel and $87 per tonne, respectively. A levy on gold exports was scrapped after concerns were raised that it could lead to a boom in illegal mining.

Juan Camilo Nariño, president of the National Mining Association, criticised the tax at the business group’s annual conference last week. “That of course has a very large impact and has no precedent in the tax structure of Latin American countries,” he said.

Last week, Colombia’s Council of State, the country’s highest administrative court, put wind in the government’s sails with a ruling that called for greater environmental oversight of the mining sector. 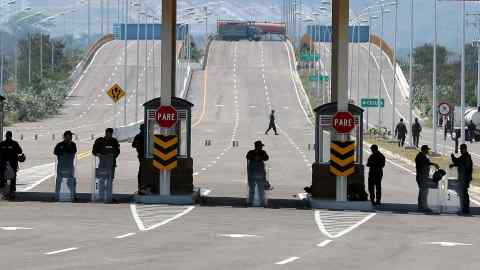 Paul Harris, a Colombia-based mining analyst who organises the annual CGS conference, said that the proposed regulations on exploration would be detrimental to a sector that already had some of the strictest environmental oversight in the region.

“Colombia is in danger of killing off its exploration sector by a thousand small cuts in paperwork,” the analyst said. “Capital flows to the path of least resistance. If it’s too hard in Colombia, and many companies think it is, then they’ll go to Ecuador or Chile or Peru or who knows where.”

Harris added that environmental considerations should come once mineral deposits had been discovered.

“I can’t think of anywhere else in the world where the government forced a company to do an environmental impact assessment to request an exploration property. It’s beyond exaggerated.”