Collector Alex Petalas: ‘The art world is a daunting place’

Art collector Alex Petalas comes bounding down the staircase to meet me when I visit The Perimeter, the private art space he founded in a Camden mews just over a year ago.

He is wearing an open-necked pale blue shirt and a pair of navy trousers, neatly frayed at the hems, and is shoeless. Although almost 38, he looks years younger, with glossy black hair, dark eyes and a ready smile.

Swiss-born but from a Greek family, the multilingual Petalas is in a fortunate position: thanks to the family’s shipping and property business, he can focus full-time on The Perimeter, which shows his collection of contemporary art in a former warehouse, now elegantly remodelled by 6a Architects.

When we meet the space is bare, in preparation for a solo show by Ron Nagle, but I have previously seen parts of his collection, which today comprises works by about 200 artists, including Phyllida Barlow, Martin Creed, Peter Halley, Sarah Lucas, Avery Singer and Karla Black — many but not all are British creators.

“I moved to London 15 years ago,” Petalas recounts: “And I initially qualified as a solicitor, but after a couple of years I realised this was not for me. I wanted to involve myself with the art world and felt there was more I could do there.”

His first purchase was in 2009, when he acquired a slightly wonky, voided metal sphere on a tall stand by Eva Rothschild, the Irish-born artist who represented Ireland at this year’s Venice Biennale. Titled “The Perimeter”, it gave its name to the space Petalas later opened. Subsequent acquisitions have included an accumulation of painted chairs by Barlow, a Laure Prouvost video, “Grandma’s Dream” and a yellow Martin Creed neon, “Love”.

“At the beginning I went slowly, the art world is a daunting place, with its ‘unusual policies’,” he smiles. But guided by dealers, notably Stuart Shave of Modern Art and Sadie Coles, plus using art advisor Prue O’Day, he gradually found his feet.

“You need someone’s help at first, but now I feel confident on my own,” he says. He is now co-chair of Tate’s Young Patrons group.

The shift from just building up a personal collection to opening his own space came because, he explains, “I had to make a decision, either stop buying or put it on show. I have seen so many collections hidden in storage, it’s super sad. I didn’t want that.”

By chance he found the ideal location, a three-storey mews building in Bloomsbury, and with 6a and the help of his father, also an architect, he worked on converting it. He dug out two basements — one for the machinery needed to control humidity and temperature, one for his archives. While he doesn’t give figures for the work, he admits it was “super expensive”.

Petalas proudly shows off the refit: the elegant bleached oak woodwork, the sleek brass fittings and the nickel silver balustrade, arcaded like some of the original features of the building. A “shadow gap” at the top of the walls in his office circulates air, removing the necessity of grilles in the ceiling.

He is shoeless so as not to scuff the floors; guests are politely requested, but not obliged, to follow suit. Showiness is not in his nature, he says: there is just a number over the outside door and nothing to indicate there is an exhibition space inside.

“This is a very personal place, and I want it to be welcoming for visitors, to give them an experience,” he says. “I am always here, it’s my office and second home. I often take visitors around myself, that’s why it is only open two days a week.” Visits are free, but booking is essential.

His aim, he says, “is to make a different model of what you can do with a collection”, but he says he was influenced by the Rennie Museum — a free-access building in Vancouver’s Chinatown which shows real estate developer Bob Rennie’s collection of contemporary art.

As for his aim to make visitors comfortable, some settle right in — Petalas cites one woman who sat down on the Mattia Bonetti sofa in his office and started doing her emails.

I ask what he looks for when buying works of art and he enumerates: “Firstly, I try to imagine, could I find this in a permanent collection in 20 years’ time? It’s easy to get caught up in the moment, but a lot [of the work that is usually for sale] won’t last: 95 per cent of the artists we look at today, no one will ever remember.

“Then, I always want to see a work in the flesh — I never buy sight unseen. It’s so sad to buy off a jpeg. And finally, I also have to love the work, you have to go with your heart!”

As well as buying art, Petalas has commissioned two works — a sound piece by Susan Philipsz which plays when the front door is opened, and a Prem Sahib mirror work placed in the downstairs bathroom.

Asked about the long-term future of the space, for the first time Petalas hesitates before answering. “At the moment, the future is this,” he says: “I have the Ron Nagle show coming up, then I will show works from my collection before making a solo show around another artist from my holdings.

“I might want to expand, and indeed the building opposite came up for sale, but it was too expensive. I would like to collaborate more with artists and commission more work: beyond that, I don’t know. Maybe it would be fun to do a different kind of space somewhere else. ”

Petalas says he is very aware of his privileged position as he concludes, “I feel a sense of responsibility to give back to the community. I love this district and its energy — I think The Perimeter has added something to the area and I am proud of that.” 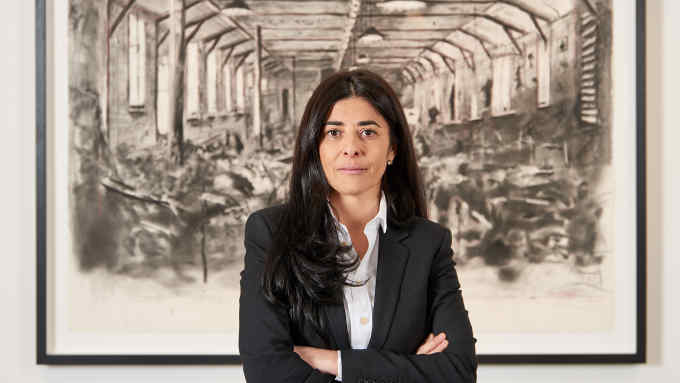