London Fashion Week Mens SS20: Why fashion must be more than a meme

If there a single justification for London Fashion Week Men’s to exist, it comes in the form of Craig Green — a remarkable talent whose rise has been nurtured by an incubator only possible in British fashion (Lulu Kennedy’s altruistic scheme Fashion East; the financial support of the British Fashion Council’s NEWGEN sponsorship; and space and mentorship from Alexander McQueen’s Sarabande Foundation), but whose vision resonates globally. Green has grown from being a fledgling graduate to become a small but tidy fashion operation; he stages shows like no others, not only in London, but worldwide. And people come to see what he has to say.

For next spring, Green felt positive — like Miuccia Prada, who showed clothes pepped with optimism and colour, which Green had plenty of as well. Indeed, his colour sense was exceptional — a delicate eau de nil, a powdery pink, a virulent satsuma that was best as one of a series of phenomenal “lantern men” in ripstop nylon, cutworked like paper doilies that looked like nothing we’d quite seen before.

Backstage, Green threw out a thousand ideas that inspired him — including mirrors, the idea of self-scrutiny, and “skin as a material”. “Goodbye Horses” by Q Lazzarus, from the soundtrack to Silence of the Lambs, recurred as background music. Luckily, there were no skin suits made out of real girls, although there were frameworks of tubes that resembled bones, quilting that looked like muscle structures slicing up the body with surgical precision, and prints based on the human body distorted with puckered shirring made from knicker-elastic.

That body scrutiny — “intense self-study” as Green said — felt very connected to the time. Spring/summer 2020 has arrived just as we’re entering summer 2019, a time of packed gyms six-packed to the gills in beach body ready-ness, where debate rages about the unrealistic body ideals touted by everyone, from Victoria’s Secret to Love Island. The ideas around the body lead, perhaps, to activewear — Green showcased a collaboration with Adidas, in case you needed something new to work out in.

Trainer collab next to knicker-elastic “body suits”. The wonderful thing about Craig Green is precisely that: his ability to satisfy both ends of the all-important fashion equation, the pragmatists and the dreamers. The pragmatists will love Green’s lightly-padded jackets and inlaid coats, with just enough special detailing to excite consumers, but nothing to scare the horses.

That’s a modest achievement. The great one is to satisfy that smaller group who believe in fashion as something beautiful and moving and kind of transcendental, something removed from all that clothing malarky. The people who, rightly or wrongly, consider the clothes on your back as a medium that can express something profound and meaningful about the state of the human spirit at any given moment in time.

That’s a lot to lay at the door of a relatively young designer like Green, but he achieves it. These clothes said volumes about our current self-regarding society, our obsession with our own reflection which, removed from accusations of vanity, rather reflect fundamental ideas of fragility, vulnerability and self-worth, especially when it comes to men. And yet, Green’s message wasn’t one of pessimism — but rather celebration. His clothes made your spirit soar.

Martine Rose is also profoundly talented, but there’s something about her ironic, cynical take on fashion that doesn’t elicit the same reaction. That’s not necessarily a criticism. Her collection also felt very of the moment, her clown print was a response to the British government’s current state; she staged her show on the naff astroturfed rooftop of a truly hideous building, Beaufort House, designed in 1987 at the peak of postmodernism.

Sometimes her clothes are naff and hideous also — they’re postmodern, or even post-postmodern. They seem born of internet memes: which isn’t necessarily to denigrate them. After all, a couple of years ago, Cambridge offered a short course on “understanding and analysis of the meme revolution”. Maybe future generations will pore over them. But when a meme outlives its meme-ness, what are you left with? A strange slogan over a picture, or here over a T-shirt. And we’ve seen all that before.

Martine Rose is a consultant at the wildly successful Kering brand Balenciaga, which is set to break €1bn in turnover this year for the first time. It has done so with clothes that look a lot like the ones Rose showed, with those pithy slogans and odd proportions and purposefully unpleasant footwear. Were these unique enough to make people buy more? Maybe.

The striking thing was how fully Rose realises her own universe, of twisted-up, chewed up jackets and kick-flare trousers and those ugly, ugly shoes, which feel compelling enough to pull you in, if you want to look like that. Yet, I’d argue that we’re rapidly reaching saturation point with meaningless logotypes and graphics across bog-standard garments — they’re still seen far too often across far too many things by far too many designers. Luckily, within Rose’s show, there were other things, clever things — the tailoring, intentionally sloppy and sliding off shoulders, looked impeccably well made, as did the twisted T-shirts, intentionally cut on a slant, displacing necks and arms and sliding soccer-inspired markings around the body. Those took skill and talent. They were more than a meme. 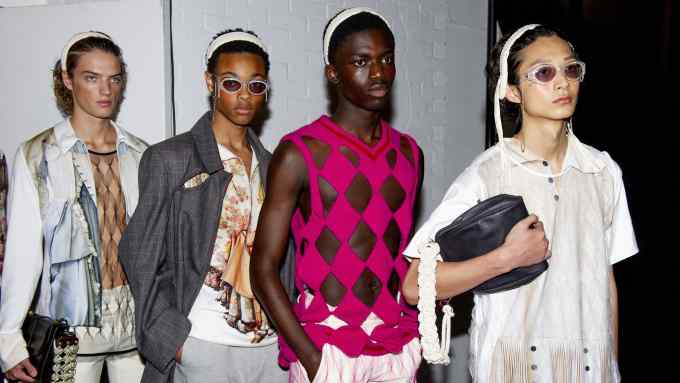