LAXART’s Hamza Walker: ‘Music is a great way to get to know an artist’

Hamza Walker is talking about mobile phone ringtones. The executive director of LAXART, a non-profit art space in Los Angeles, explains how music is a barometer, reflecting personal tastes and passions. “Cell phones are new, but you remember there was a brief period, six or seven years ago, when you could personalise your ringtone,” he says. “A phone would ring and you’d think, ‘Of all the songs, you chose that!’ ”

There is a point to these meditations. Music underpins the talks programme at Frieze LA, with a series called “Name That Tune” — after the 1950s TV game show — launching at LAXART before the fair. Walker is co-ordinating the programme with the music critic Josh Kun, a professor at the University of Southern California. Their aim is to “challenge the ears and knowledge” of select LA-based artists who work with “noise, sound or popular music”.

Artists Frances Stark, Lauren Halsey and Jim Shaw, the “contestants” in this 21st-century version of the game show, are invited to mine their record collections and dissect their favourite song lyrics. “It’s a beautiful thing because so many artists are interested in music. It’s a great way to get to know an artist,” Walker says.

His own musical predilections reveal much about the 52-year-old curator and polymath, who was raised in Baltimore and whose father was a jazz musician. “I grew up with music,” he tells me. But moving to Chicago to study art history in the mid-1980s dramatically expanded his musical canon. “The history of music in Chicago is very deep in terms of the last canonical chapter in the history of jazz, and then, by default, experimental avant-garde music,” he says.

Walker is closely associated with the city, having worked for more than 30 years in some of Chicago’s most important arts institutions, beginning with the arts and education centre Urban Gateways in 1988.

This was followed by a stint, in the early 1990s, as public art co-ordinator for the City of Chicago’s department of cultural affairs. Interspersed throughout are periods at the Randolph Street Gallery, an artist-run space that closed in 1998, where Walker began organising exhibitions.

“There was nothing but on-the-job training,” he replies, when I ask if he ever trained formally as a curator. “Randolph Street Gallery was where I did my first studio visits. I was a member of the artist community — its writers, administrators, etc. I am marked by that; I am not an academic. That’s how I cut my teeth, by hanging out with artists and talking shit. That’s how you learn. You go to friends’ houses, your friends are all artists and you look at their books.”

Walker got a job at the University of Chicago’s contemporary art centre, the Renaissance Society, in 1994 and stayed for the next 22 years, moving from the post of director of education to associate curator. He curated many exhibitions there, but his 2008 show Black Is, Black Ain’t is mentioned most often when I ask critics and curators about his work.

That show, cited by scholars as an astute examination of racial identity, included work by the Kansas City-based artist Randy Regier, who showed the sculpture “Impending Future Bus” (2004). “It was important because the conversations and questions it sought to provoke, encourage and illuminate needed to be had,” Regier tells me.

I point out that Walker’s shows seem prescient. “The ideology,” Walker says, “is this: we are more alike than we are different.” There follows a commendable dissection of black America, touching on the workplace revolution — “I look around the landscape at my colleagues, and there’s a whole sea of young curators of colour. It’s incredible” — to the recent market fillip for established black artists.

“Along with the success of younger black artists, there’s also [established names] such as Melvin Edwards and Jack Whitten. David Kordansky Gallery has taken on Sam Gilliam; Hauser & Wirth has taken on Charles Gaines. If you have an all-white roster, it’s like: you lose! Fred Eversley [who is showing work at David Kordansky Gallery, until March 2] . . . you look at that work: that shit is legit, if only by virtue of time. It’s better late than never,” he says.

Walker is now carving a niche in Los Angeles at LAXART, a West Hollywood institution once the preserve of younger and lesser known artists. Following his appointment in 2016, he helped rewrite its mission statement, which is now more open-ended. “There are a number of spaces that have taken up that slack with respect to emerging artists. LAXART does not need to focus solely on that. It’s not that we’re abandoning that, it’s just not at the core of the mission,” he says.

Back to Frieze LA, and Walker is excited about the pairings he is bringing to the Sherry Lansing Theatre on February 16 and 17, part of more talks he is curating at the fair. The LA painter Mary Weatherford will be speaking to the art historian Suzanne Hudson, while artist Liz Larner is paired with the poet Ariana Reines.

The key is informality. “These conversations are conversations — it’s better than an artist talking at an audience. Everybody knows each other but they’ve never spoken together in public. The artists and film-makers Sondra Perry and Cauleen Smith [another duo] are also old friends,” Walker says.

Finally, I ask if Frieze LA represents a tipping-point moment for the city: is it ready for the fair and its frills? There is no hesitation. “It’s big, it’s young, it can absorb it all,” he hollers. “Give me more, more!” 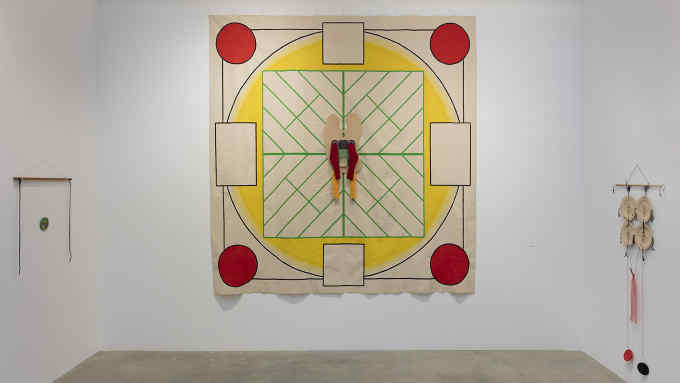