Accessibility helpSkip to navigationSkip to contentSkip to footer
Technology sector

What to expect at CES 2019: from smart speakers to intelligent toilets

We were promised flying cars. Instead we get “intelligent toilets”.

The Consumer Electronics Show, the annual tech jamboree, is a strange affair. Billed as a glimpse into the future, it often becomes a race to the bottom of the Shenzhen supply chain — as illustrated by Kohler’s new Alexa-powered Numi 2.0 toilet, which boasts a voice-controlled heated seat, flushing and “dynamic” lighting.

The Cambrian explosion of gadgetry on show in Las Vegas every January tends to produce many more oddities than breakthroughs, from curved-screen TVs and internet fridges to robot pillows, “smart” underwear and autonomous luggage.

Yet with Apple’s warning this month highlighting the parlous state of the smartphone market, the search for the next big thing is becoming increasingly urgent. Virtual reality and self-driving cars, both hyped in recent years, are still looking quite distant prospects, while artificial intelligence has become so widely touted at CES as to devalue the entire concept.

Nonetheless, it is becoming clear that virtual assistants such as Alexa are gaining real traction with consumers, while the entire industry is gearing up for a huge push on next-generation “5G” wireless networks this year.

As some 180,000 attendees brace themselves for the sensory bombardment of 2.5m square feet of exhibition space, here are the most likely topics of obsession at CES 2019.

If the consumer electronics industry has one message it wants attendees to take away from CES this year, it is that 5G is “here”. Executives from chip companies Qualcomm and Intel, mobile operators AT&T and Verizon and tech groups including IBM will all be focusing their keynotes on the new wireless networks, which promise higher speeds, lower power requirements and the arrival of the “internet of things”.

American cities such as Los Angeles and Houston are already seeing the first 5G networks being tested, while smartphone makers including Samsung have promised to launch devices supporting the technology in the coming months.

However, for 5G to live up to the deafening hype, it must deliver more than just faster YouTube streams on small screens. If CES does not showcase meaningful new kinds of devices that can tap into 5G networks, it could slow the technology’s momentum.

Smart speakers such as Amazon’s Echo and Google Home are the closest thing the hardware industry has found to a successor to the smartphone, with Amazon alone claiming it sold “tens of millions” of Echo devices last year.

Amazon remains the market leader but Google’s fightback kicked off with a huge marketing push at CES last year, as the search group plastered buildings, billboards and monorail trains around Las Vegas with its Assistant.

The effort seems to be paying off: research group eMarketer predicts that Amazon Echo’s share of the US smart speaker market will fall below two-thirds for the first time this year, with Google Home taking 31 per cent of sales. eMarketer estimates that 74m people in the US will use a smart speaker this year, more than a quarter of the adult population.

Plugging Alexa and Google Assistant into an ever-increasing variety of household products has been a theme of CES for the last couple of years. Television sets are becoming a particular focus for Amazon as it vies with Roku to become the gateway to the “connected TV”.

Now Amazon and Google are hoping to liberate their robots from the “smart home” and take them out and about, with integrations into headphones, “smart glasses”, cars and even bikes.

Self-driving cars have yet to progress from test beds in California and Arizona to the rest of the world, but that does not mean transport has fallen off the CES road map.

There will be more delivery robots, drones and electric skateboards at this week’s show, as well as new kinds of in-car entertainment and driver assistance technology. Heavyweight speakers include US secretary of transportation Elaine Chao and Waymo chief executive John Krafcik.

The rapid growth of Bird and Lime’s shared scooters last year has opened the door to a new frenzy for short-range electric transportation devices.

China’s Segway-Ninebot, whose vehicles are used by almost every scooter-sharing start-up, will be showing off its new “Model Max” scooter designed to be more rugged and reliable in all kinds of weather conditions.

Tony Ho, vice-president at Segway-Ninebot, has predicted that the next generation of the electric two-wheelers will come equipped with sensors to warn if they have fallen over or even “semi-autonomously navigate” if they are parked improperly. “Essentially what we are doing now is turning micro-mobility devices into a robot,” he says.

CES has always seemed pretty removed from the real world. But even Las Vegas will be unable to escape the debate about technology’s impact on society and the people that use it — from security and privacy to how US president Donald Trump’s trade war might affect the expected 15,000 Chinese attendees.

Last year, a warning on the eve of CES from Apple shareholders about the health effects of smartphone addiction failed to produce a meaningful response from electronics industry executives. 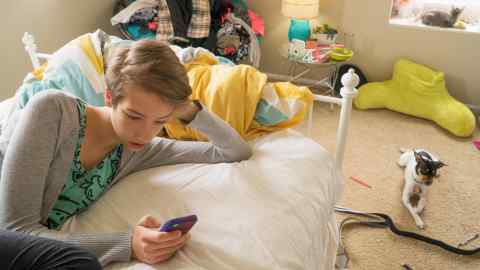 Since then, screen time monitoring tools and greater parental controls have been added to iPhones and Android devices. Smaller manufactures have produced simplified smartphone alternatives, such as the Palm and Light Phone, designed to keep consumers connected without being distracted.

“There is a growing realisation that addiction to mobile phones and obsessive usage is starting to become a major societal issue,” said Ben Wood, analyst at CCS Insight.

But he added that it is unclear how seriously tech companies are taking the problem: “More hardware isn’t the answer but that seems to be the industry’s response at the moment.”