City of London asset managers have hit back against “radical” EU regulatory proposals that are perceived as a renewed attempt to lure investment jobs to European financial centres after Brexit.

Fund managers are alarmed by a recommendation by Europe’s top markets regulator to overhaul the outsourcing model that is relied upon by global investment groups.

They fear the European Securities and Markets Authority’s move is a prelude to a fresh EU raid on the £9tn UK asset management sector. An earlier failed attempt, led by France, is still fresh in the minds of many industry leaders.

Fund groups and their industry associations, including the UK Investment Association, are pressing policymakers to rebuff Esma’s recommendations ahead of a wider review of the EU’s asset management rule book in the autumn.

At the heart of the issue is so-called delegation, which allows an asset manager to set up a fund in one country, such as Ireland or Luxembourg, and carry out portfolio management in another location, such as the UK. An estimated £1.7tn of European investor assets are managed from the UK, according to the IA.

To the relief of UK-based asset managers, the preservation of delegation rights in the event of a no-deal Brexit has been ensured by a series of technical agreements between regulators. But in its August letter to the European Commission, Esma proposed far-reaching changes that would override these agreements, a step that many believe was politically motivated.

Esma’s suggestion that the EU set out in law a list of core functions that must always be performed inside the bloc could pave the way for Brussels to force portfolio management jobs, “the jewel in the crown for the UK”, to relocate to Europe, said one industry figure.

“This is quite clearly a political manoeuvre by the EU to either generate uncertainty or deliberately attack the UK as the second-largest portfolio management centre in the world,” the person said.

Esma told the Financial Times its August letter did not state that certain activities had to be carried out inside the EU but invited the commission to clarify the legislation in order to enhance supervisory convergence in the EU.

UK fund chiefs raised the issue with City minister John Glen in a meeting organised by the IA this month, urging him to use the UK’s voice to preserve delegation, according to one attendee. 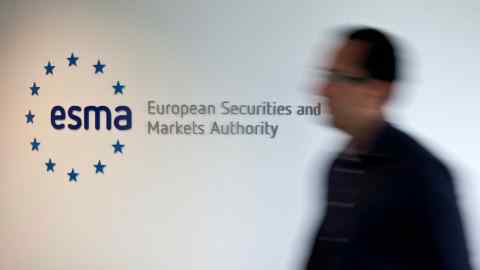 The European Fund and Asset Management Association, which counts UK managers among its members, also plans to meet European Commission staff in the coming days to defend delegation, said another person familiar with the situation.

An overhaul of delegation rules would not just affect UK asset managers. Many global managers use the model to access investment expertise in far-flung countries.

Federico Cupelli, senior regulatory policy adviser at Efama, described Esma’s recommendations as “radical”, pointing out that they would have extraterritorial implications.

Sheila Nicoll, head of public policy at Schroders, said that asset managers had long “ridden the tide” of globalisation but were now facing the threat of growing protectionism.

“You hear the word ‘sovereignty’ being used in the EU,” said Ms Nicoll, speaking at a Luxembourg fund industry conference. “We’re going to have to keep urging the EU to [avoid] turn[ing] in on itself.”