German industrial production rose by less than economists had expected in July, fuelling concerns about whether the nascent recovery in the eurozone’s pandemic-stricken economy is running out of steam.

The 1.2 per cent month-on-month rise in German industrial output in July reported by the Federal Statistical Office on Monday was the third consecutive month of growth. But it undershot economists’ consensus expectations for a 4.8 per cent increase, according to a poll by Reuters.

The figure adds to the concerns of policymakers at the European Central Bank, who will meet on Thursday to discuss monetary policy and are likely to consider how the recent appreciation of the euro risks undermining the competitiveness of eurozone exports and driving down import prices.

The Federal Statistical Office slightly upgraded its initial estimate of Germany’s monthly industrial production expansion in June to 9.3 per cent. But it said the manufacturing sector’s output in July remained 10 per cent below the level of a year ago.

Production in the strategically important German carmaking sector rose 6.9 per cent in July from the previous month, but it was still 15 per cent below the pre-pandemic levels of February.

New car registrations in Germany were down 20 per cent year on year in August, a drop from their 5.4 per cent annual contraction in July.

Excluding production declines in construction and energy goods, all other areas of German industry increased production by 2.8 per cent.

“Production is likely to have increased again in August, but we now seem to be past the period of rapid catch-up growth,” said Jack Allen-Reynolds, economist at Capital Economics.

Separate data published on Friday showed that German factory orders expanded less than forecasts had expected in July, rising only 2.8 per cent month on month, compared with economists’ consensus expectations for a 5 per cent increase.

A sharp drop in domestic orders for German manufacturers was offset by a strong rise in foreign orders — reversing the pattern in June. 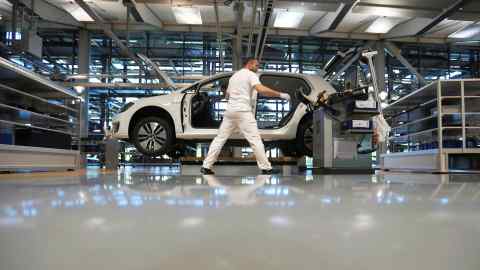 The revival of the Chinese market has become a particular bright spot for German exporters; exports to China from Europe’s largest economy rose 16 per cent between May and June.

“Orders for German goods from outside the eurozone have gained some traction in July, with the ongoing recovery in China possibly becoming a stabilising factor for growth, while major eurozone countries are facing rising new infection rates and growing concerns that regional lockdowns may need to be implemented,” said Thomas Strobel, economist at UniCredit.

The German government recently boosted its package of economic support measures, including extending by a year its Kurzarbeit furlough scheme, under which workers are sent home and receive about two-thirds of their pay from the government.

Peter Altmaier, economy minister, also sent an upbeat message about the German economy last week, forecasting that the resilience of the country’s labour market would help it achieve a sharp, V-shaped recovery.

Mr Altmaier forecast that the German economy would shrink 5.8 per cent over the course of this year, compared with an earlier forecast of a 6.3 per cent contraction. He expected the economy would return to pre-pandemic levels in 2022.