Laura Noonan in Belfast and Peter Foster in Brighton

Brexit shrank UK services exports by more than £110bn over a four-year period, new research shows, highlighting the far-reaching trade implications of Britain’s decision to break away from the EU.

Experts at Aston University in Birmingham found that UK services exports from 2016 to 2019 were cumulatively £113bn lower than they would have been had the UK not voted to quit the EU in June 2016.

The researchers calculated the figure by projecting how industries from IT and finance to business services would have grown if they had continued on their previous paths, and compared that with how they had actually progressed since the vote for Brexit. The gap was £113bn.

“What we find raises serious concerns about the damage to the UK’s services trade position and the likely spillovers to the economy and jobs related to the services sectors,” said Jun Du, professor of economics at Aston Business School.

The findings point to the underlying challenges UK services exporters will face in maintaining trade with the EU after the conclusion of the UK’s post-Brexit deal with Brussels.

The agreement contains minimal provisions on financial and professional services — industries that are crucial to Britain’s economy. In 2019 the UK ran an £18bn surplus in services trade with the EU, against a deficit of £97bn in goods.

Data for 2020 were not included in the Aston study because the pandemic has distorted economies so greatly. Du told the Financial Times that the trend of services companies moving away from the UK could accelerate as the pandemic’s influence fades.

“The Covid period created difficulties in moving business and individuals [which] slowed down this relocation process . . . it will now pick up, and get worse as businesses see that there is not much going on in UK-EU negotiations. I think this is only the beginning,” she said.

Financial services exports were the hardest hit, in monetary terms, as banks, insurers and asset managers moved thousands of people and billions in capital from hubs in the City and Canary Wharf to new centres in Frankfurt, Paris, Amsterdam and Dublin so they could trade seamlessly with clients after Brexit. The other most-affected UK sectors included business services, travel, transport and IT, Aston’s research found. 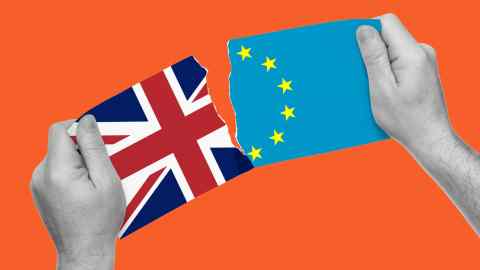 “Behind the scenes the effect [from leaving the EU] is clearly showing up in the data,” said John Springford, deputy director of the Centre for European Reform think-tank, citing his own research and figures from the Office for National Statistics, the London School of Economics and the Tony Blair Institute for Global Change. He said the data showed the UK’s trade with the EU had fallen by a fifth because of Brexit.

“Brexit has already made Britain poorer compared to a branch of history in which Britain remained in the EU — or indeed in the single market,” he added.

Ireland’s cumulative services exports from 2016 to 2019 were £126bn higher than projections based on the trends up to 2016. Aston’s professors argue that this is because Ireland has won UK business after Brexit. Irish economists disagree.

“Ireland’s services exports boom has clearly mainly been due to ICT exports (Facebook, Google etc),” said Conall Mac Coille, chief economist at Ireland’s largest stockbroker Davy, referring to the information, communications and technology sector. “These companies were already operating in Ireland prior to the referendum and have seen explosive growth since then.”