Mega-collectors Mera and Don Rubell: ‘It’s a walking history of our life!’

Anyone who does the art circuit, through fairs and biennales, will be familiar with the figures of Mera and Don Rubell, mega-collectors, trailblazers in the private museum field in Miami and the force behind the transformation of a whole district in the Florida city.

Don — a former gynaecologist, tall, rather avuncular — and Mera, a lively former teacher who just about reaches to his shoulder, have spent 55 years travelling the world visiting artists and amassing vast holdings of contemporary art: more than 7,200 works by some 1,000 artists at the last count. It is certainly one of the foremost collections of contemporary art in public or private hands in the US, built up without the help of any consultants or advisors.

The Rubells are known for spotting promising artists very early: they acquired Cindy Sherman in 1978, Jeff Koons a year later, Keith Haring and Richard Prince in 1981. Even today, with greater resources, they still visit young artists in their studios, often buying several or all of the works. And they are still clocking up 100,000 miles in travel a year. “It’s challenging,” says Mera.

In 1993 they acquired a former Drugs Enforcement Agency (DEA) warehouse for confiscated goods and put parts of their collection on view in an art space dubbed the Rubell Family Collection. It was in the Wynwood district, once a seedy no-go area, now transformed into a smart neighbourhood with bars, art galleries and name brand retailers — much of this thanks to the Rubells.

Now, to coincide with Art Basel Miami Beach, the couple are trailblazing again and inaugurating a huge new space in nearby Allapattah: developers are already circling and investing in a food produce neighbourhood now ripe for gentrification. The 100,000 sq ft “campus” is in six converted former industrial buildings, connected and transformed by Selldorf Architects: it has been named the Rubell Museum.

I catch Mera on the telephone, walking around the building just before the opening; Don was detained elsewhere. But, says Mera, occasionally interrupted by banging: “The thing about our family, whoever you are talking to is the boss: anyway that’s how it feels. So today you’ve got me!” And indeed the Rubells are a family affair. Son Jason is involved in decision-making; daughter Jennifer is an artist; grandchildren aged between seven and 18 are also regularly consulted about the museum.

Talking about the new space, Mera says: “The building found us rather than the other way around. We needed more storage because we thought our 11-year-long travelling exhibition, 30 Americans, was coming back, we didn’t know where to put the hundreds of works, particularly as we are constantly acquiring. We had never really ventured into Allapattah and then we found these six warehouses in a row, with no elevators and no stairs. But over the two years it took to refurbish, we often asked ourselves, ‘What were we thinking?!’ It’s so much bigger than what we had before; we had a limited budget …and very strong opinions, after running a public space for 25 years.”

They have been buying art since they wed in 1964. At the beginning, budget constraints were such that they could only afford young unknowns and, says Mera, it wasn’t until the 1970s that they began to consider themselves as collectors. “It was during our trips to Art Cologne that we started to identify as collectors — Europeans led the way, they had a profound respect for people like us, buying artists no one had ever heard of.”

The decision to open their first space in Miami in 1993 was driven initially by the need for warehousing space, as their collection was edging them out of their living room and bedroom. Now they are expanding into even bigger premises, I ask why the new space is called a “museum”, whereas the old was a “collection”. Mera answers: “We felt it would be unacceptable to call ourselves a museum at the start, and disrespectful to museum professionals to use that word. But now, particularly for our local community, the word ‘museum’ is something they understand; that it is open to the public whereas they saw a ‘collection’ as something private.”

I ask if the transition to collecting for themselves, and collecting for a public space, changed the way they look at art and engage with it. Mera says: “When we first took the collection public it totally paralysed us because we had a dilemma — we thought about all the art we didn’t have. And for a while it took the fun out of collecting. We couldn’t be who we were. People could walk in and say, ‘Where is your [Jasper] Johns?’ — and we were showing Keith Haring. But one day we had a family session and decided we have to celebrate who we are, and this is what we do.”

The opening exhibition demonstrates the range and depth of their buying: Jeff Koons, Marlene Dumas, Ai Weiwei, Wade Guyton, Keith Haring and many more, as well as a large group of works by Hank Willis Thomas. Of the new space, Mera says: “It’s amazing, it is a walking history of our life!”

I remind Mera of something she said in the past, that by buying emerging artists, it may be some time before the “essence” of a work is clear. Are there disappointments in some of the works they acquired over so many years?

“It’s amazing how rarely this happens,” she replies. “So often the work remains relevant.” And do they resell? Mera readily admits that they do: “Sometimes if we sell one work we acquired 30 years ago, we can buy a whole body of new work by another artist or group of artists.”

In the case of Purvis Young, a self-taught Wynwood artist who died penniless in 2010, the Rubells bought all his work — 3,000 items — in 1999 and put on a solo exhibition this year, after donating almost 500 paintings to other museums and institutions. Famously, the Rubells also gave a residency to the then-unknown Colombian artist Oscar Murillo, now an international star and shortlisted for Britain’s Turner Prize.

According to a fellow collector, the Rubells are good at bargaining, obtaining significant discounts in exchange for the visibility the artists will get. And indeed, Mera singles out for thanks the galleries and artists who, she says: “Give us a great price and long payment terms; they trust us and work with us.”

They have also done well out of real estate: sale of the DEA building covered the new Allapattah space (“and then some,” says Mera); the new building should also gain in value as the neighbourhood attracts more investment.

I ask about the sustainability of the museum into the future — always a tricky question for privatemuseums. “For the moment it’s all on us, we don’t have an endowment, and we don’t want to sell art to create one. But we have been very successful in business [real estate and hotels], and the new museum has an events space which we hope will help support our model and make it sustainable.”

The next step is Washington DC, where the Rubells are opening a museum within a massive development project. “It’s taken six years, but we finally have a developer and financial partner. In three years, we hope to have another museum; or maybe I should call it another mothership!” she laughs. And then she is off to look at a few more details of the new museum. 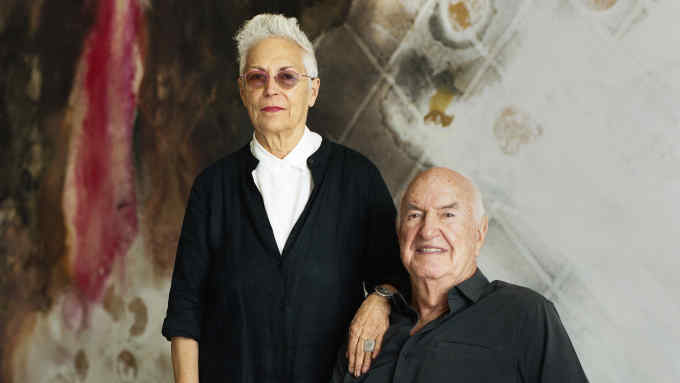