In a crisis, sometimes you don’t tell the whole story

It is time to admit that I once deliberately withheld important information from readers. It was 10 years ago, the financial crisis was at its worst, and I think I did the right thing. But a decade on from the 2008 crisis (our front pages from the period are at ft.com/financialcrisis), I need to discuss it.

The moment came on September 17, two days after Lehman declared bankruptcy. That Wednesday was — for me — the scariest day of the crisis, when world finance came closest to all-out collapse. But I did not write as much in the FT.

Two critical news items had broken on Tuesday night. First, AIG received an $85bn bailout. It needed it because it had to pay up for credit default swap transactions it had guaranteed. Without those guarantees, bonds sitting on banks’ balance sheets and assumed to be of no risk would instead be deemed worthless. That would instantly render many of the banks holding them technically insolvent. A failure of AIG, many believed, would mean an instantaneous collapse of the European banking system, which held much impaired US credit.

That the US had coughed up so much money suggested that AIG’s guarantees could not be trusted — so what collateral could possibly be good for a loan?

Meanwhile, the Reserve Fund, the largest US independent money market mutual fund, announced a loss on its holdings of Lehman bonds. As a result, its price would fall below $1 per share.

The funds were vital customers for short-term debt. Without them, how could banks or big companies fund themselves? Investors rushed to pull money out of money funds, while the funds’ managers dumped corporate bonds for the safety of Treasury bills.

This was a run on the bank. The solvency of Wall Street’s biggest banks was in question. Amid chaos, the yield on Treasury bills fell to its lowest since Pearl Harbor. Desperate people needed safety; interest rates did not matter.

Unlike 2007’s run on Northern Rock in the UK, none of this was visible. Queues do not form around the block to buy T-bills. But Wall Streeters I spoke to thought the banking system was at risk of failing. 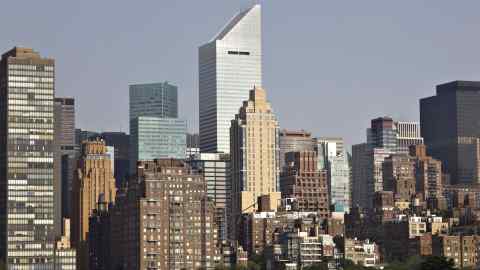 As it happened, I had a lot of cash in my bank account, at Citibank. I was above the limit covered by US deposit insurance, so if Citi went bust, a once inconceivable event that I could now imagine, I would lose money for good.

At lunch hour I headed to Citi, planning to take out half my money and put it into an account at the Chase branch next door. That would double the money that I had insured.

We were in midtown Manhattan, surrounded by investment banking offices. At Citi, I found a long queue, all well-dressed Wall Streeters. They were doing the same as me. Next door, Chase was also full of anxious-looking bankers.

Once I reached the relationship officer, who was great, she told me that she and her opposite number at Chase had agreed a plan of action. I need not open an account at another bank.

Using bullet points, she asked if I was married, and had children. Then she opened accounts for each of my children in trust, and a joint account with my wife. In just a few minutes I had quadrupled my deposit insurance coverage. I was now exposed to Uncle Sam, not Citi. With a smile she told me she had been doing this all morning. Neither she nor her friend at Chase had ever had requests to do this until that week.

I was finding it a little hard to breathe. There was a bank run happening, in New York’s financial district. The people panicking were the Wall Streeters who best understood what was going on.

All I needed was to get a photographer to take a few shots of the well-dressed bankers queueing for their money, and write a caption explaining it.

We did not do this. Such a story on the FT’s front page might have been enough to push the system over the edge. Our readers went unwarned, and the system went without that final prod into panic.

The next crisis will not be about banking, but the insidious danger that pension funds deflate, leaving a generation without enough money to retire

Was this the right call? I think so. All our competitors also shunned any photos of Manhattan bank branches. The right to free speech does not give us right to shout fire in a crowded cinema; there was the risk of a fire, and we might have lit the spark by shouting about it.

A few weeks later, the deposit protection limit was raised from $100,000 to $250,000 via an emergency economic stabilisation bill passed by Congress.

Ten years on, US banks are virtually the only players in the financial world plainly more secure than they were before. They have delivered and built up capital, and the risk of a sudden collapse is now far more distant.

The problem now is that disposing of that risk has obstructed the task of reducing other risks. Now, risks lie in bloated asset prices, levered investments, and in pension funds that hold them. The next crisis will not be about banking, but the insidious danger that pension funds deflate, leaving a generation without enough money to retire.

The bad news is that it is a crisis whose solution can always wait another day. Politicians can ignore it. The good news; I need not stay quiet this time.

This article has been amended to update the amount AIG received in its bailout.