Virgin Atlantic and Wizz Air are eyeing one of Thomas Cook’s most valuable assets — its take-off and landing slots at London’s Gatwick airport, which could be worth tens of millions of pounds.

Jozsef Varadi, chief executive of the Hungarian-based low-cost airline, told the Financial Times it was looking closely at the UK travel operator’s slots as part of its plan to grow in London.

Thomas Cook collapsed in the early hours of Monday morning, prompting the UK government to start Britain’s biggest ever peacetime repatriation to fly home around 150,000 holidaymakers.

The 178-year-old travel company’s take-off and landing slots at Gatwick are expected to attract a bidding war from rival airlines that could potentially include easyJet, BA’s owner IAG and Tui, because of the lack of capacity at peak times.

Airport slots can be extremely lucrative, particularly at capacity constrained airports. In early 2016, a pair of take-off and landing slots at London Heathrow were reportedly sold for as much as $75m.

While slots at Gatwick do not generate as much as at its bigger rival, Heathrow, they would still be worth tens of millions of pounds.

In 2017, British Airways bought 20 prime take-off and landing slots at Gatwick from collapsed airline Monarch, while Wizz Air bought Monarch’s slots at Luton airport. The deal was worth £54m for Monarch’s administrators, of which the large proportion — as much as £50m — came from the Gatwick sale, according to people briefed on the matter. At the time, Monarch’s Gatwick slots attracted interest from the likes of easyJet, Norwegian Air and Wizz Air. 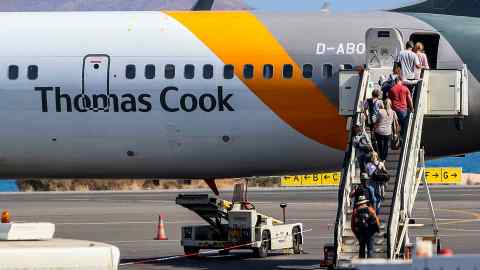 Thomas Cook has around 15 daily slot pairs during summer at Gatwick, and around eight in the winter, according to the Airports co-ordination Limited, an independent body that allocates airport slots. This equates to about 3.5 per cent of total slots at Gatwick during the peak summer period.

However, people briefed on the matter said some of these slots may not have been fully used by the travel operator. Under slot rules these could be automatically offered as part of a general pool by ACL, with new entrant airlines given priority access to 50 per cent of them free of charge.

When Monarch collapsed in October 2017 there was fierce debate in the aviation legal community over the question of who owns the slots once an airline ceases to operate.

This was clarified by a UK Court of Appeal ruling that said Monarch’s administrators had the right to sell the slots previously held by the carrier.

Wizz, eastern Europe’s largest low-cost airline, has been growing quickly in the UK. It accounts for more than 40 per cent of capacity at Luton airport after opening its base in 2017. Mr Varadi said it was looking for alternative ways to grow its business in London.