We use cookies (opens in new window) for a number of reasons, such as keeping FT Sites reliable and secure, personalising content and ads, providing social media features and to analyse how our Sites are used.
Manage cookies
Accept & continue
Snap Inc

Snapchat is testing a new version of its controversial redesign that now puts friends’ stories on the same screen as professional publisher content, despite Snap co-founder Evan Spiegel’s promise to “separate the social from the media”.

The pilot, which is being tested with a small number of users, follows a backlash in recent months, including from 1.3m people who signed an online petition demanding the company “remove the new Snapchat update”.

Investors will be eager to see whether the redesign has hit Snapchat’s audience numbers when its parent company Snap reports its first quarterly earnings next week since the overhaul.

Snap shareholders’ jitters showed through in an abrupt 8 per cent drop in its shares on Wednesday morning. The slump followed news of both the pilot and rival chat app WhatsApp’s move to restrict its European users to people aged 16 and over, as part of its attempt to comply with new EU privacy laws.

Many of Snapchat’s most energetic users are younger teenagers but it is unclear whether Snap will be forced to make the same changes to meet Europe’s General Data Protection Regulation requirements. According to eMarketer, the research group, about a fifth of Snapchat users in the US are aged 12-17.

Debra Williamson, analyst at eMarketer, said WhatsApp’s move raised the “logical question” as to whether other social networking apps, including WhatsApp’s stablemates Facebook and Instagram, would have to make the same changes.

“But it’s well known that many younger users provide false birthdates when they sign up for social media platforms that ask for their birthdate,” she said.

Despite the share price slump, Ms Williamson was positive about Snap’ s continuing efforts to fix its redesign.

“I think it’s a positive sign,” she said. “They are listening to users and are taking proactive steps in response, that’s never a bad thing for a company to do.”

Before Snap started to roll out the original redesign in December, video clips posted to its widely imitated Stories feature sat alongside posts from brands and celebrities, atop a selection of magazine publisher and TV show content from partners in its Discover programme.

The redesign moved all content from friends, whether Stories that are broadcast widely or private messages between individuals, into a single screen. Brands, celebrities and Discover publishers were kept separate on another screen. The two feeds were divided by Snapchat’s camera window.

Billing the move as Snapchat’s biggest redesign in years, Mr Spiegel said in November that “separating the social from the media” would make Snapchat feel “more personal”, in a challenge to Facebook’s newsfeed.

However, many users disagreed, and even celebrities joined the backlash that followed.

Reality TV star Kylie Jenner, one of Snapchat’s most popular celebrity users, knocked $1.6bn off Snap’s share price in February when she told her Twitter followers she was losing interest in the app — “sooo does anyone else not open Snapchat anymore? Or is it just me . . . ugh this is so sad”, she tweeted.

Snap said it had been “listening” to the feedback.

“We are always listening to our community and will continue to test updates that we hope will give Snapchatters the best possible experience on our platform,” Snap said on Tuesday. 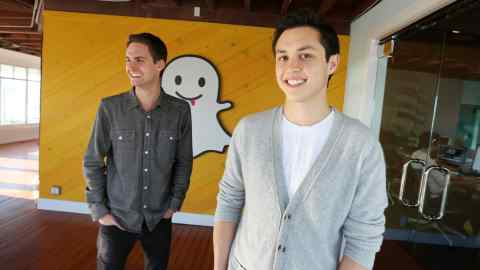 Publishers, brands and friends each have their own feeds, delineated in the app’s design, Snap said, even though they appear adjacent on the same screen. The new version will be less confusing for users who want to separate chatting with friends from passively watching video, it added.

Get alerts on Snap Inc when a new story is published