Clinton tells supporters to give Trump ‘chance to lead’

Donald Trump has won a stunning victory over Hillary Clinton, wrongfooting investors around the world and defying Republican and Democratic political elites with his populist “Make America Great Again” movement.

The victory by the political outsider, amplified by a Republican sweep of the Senate and House of Representatives, marks a repudiation of Barack Obama that was fuelled by a backlash against globalisation in the wake of the 2008 financial crisis.

The result, which upended the predictions of most pollsters and investors, led to sharp swings in financial markets. 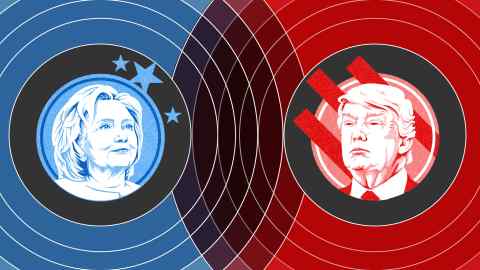 Treasury bond yields initially tumbled as investors sought safety but then rose sharply hours later as many concluded the new president would win support for fresh spending, eventually stoking inflation. The 10-year yield rose from a low of 1.71 per cent to above 2 per cent — an extraordinarily sharp move for the normally placid Treasury market.

Stocks in the US and Europe steadied with the S&P 500 index up 0.8 per cent by midday in New York, led by a rally in banks and healthcare stocks.

In an emotional concession speech in New York, Mrs Clinton urged her followers to respect the result and support their new leader. “Donald Trump is going to be our president. We owe him an open mind and the chance to lead,” she said.

While acknowledging her failure to become the US’ first female president was “painful — and will be for a long time”, the Democratic nominee sent a special message of gratitude to women voters, saying: “I want you to know that nothing has made me prouder than to be your champion.”

Mr Obama called Mr Trump early in the morning to congratulate him, the White House said, noting that the president-elect had been invited to Washington on Thursday to discuss transition planning. “We are now all rooting for his success in leading and uniting the country,” Mr Obama later said in an address to the nation, noting that he was “heartened” during their conversation by Mr Trump’s desire to foster a spirit of inclusion.

Mr Trump strode to victory with wins in battleground states, including Ohio and Pennsylvania, propelled by white, working-class “Trump Democrats”. These voters crossed party lines to back a billionaire who vowed to return jobs to America — echoing Ronald Reagan’s victory over Jimmy Carter in 1980.

In his victory speech in New York, the property developer concluded one of the most divisive campaigns in history by calling on the country to come together, as he stressed his intention to be a president for all Americans, whether they had supported him or not.

“Now it is time for America to bind the wounds of division. We have to get together,” he said. “To all Republicans and Democrats and independents across this nation, I say it is time for us to come together as one united people.” 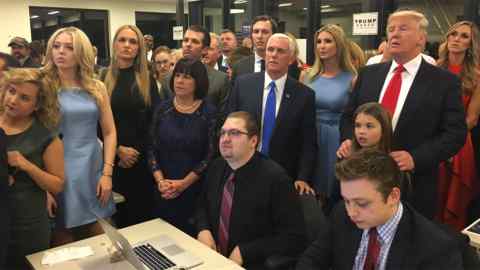 After months of vicious rhetoric against his opponent, Mr Trump congratulated Mrs Clinton, whom he said had called him to concede, and thanked the former first lady, senator and secretary of state for her years of public service.

“Hillary has worked very long and very hard over a long period of time and we owe her a major debt of gratitude for her service to our country. I mean that very sincerely,” he said. Mrs Clinton’s campaign said she would speak on Wednesday morning.

“As I’ve said from the beginning, ours was not a campaign, but rather an incredible and great movement,” Mr Trump said. “It’s a movement comprised of Americans from all races, religions, backgrounds and beliefs who want and expect our government to serve the people, and serve the people it will.”

After months of warm comments about authoritarian leaders such as Russian president Vladimir Putin, coupled with threats to downgrade America’s relationships with its allies, Mr Trump tried to assure the world that he would not be the temperamentally unfit commander-in-chief that Mrs Clinton and Mr Obama portrayed him to be.

“I want to tell the world community that while we will always put America’s interests first, we will deal fairly with everyone . . . all people and all other nations,” said Mr Trump. “We will seek common ground, not hostility; partnership, not conflict.”

His victory reverberated across the globe — but particularly in Europe, where similar brands of populism are on the rise. France and Germany have national elections next year while Italians will go to the polls in December for a constitutional referendum that could determine the political future of prime minister Matteo Renzi.

“Today the United States, tomorrow — France,” tweeted Jean-Marie Le Pen, founder of the far-right National Front. In Germany, Frank-Walter Steinmeier, the foreign minister, remarked: “We must assume that US policy will, in the coming times, be less predictable for us.”

With results still being counted, Mrs Clinton pulled ahead in the popular vote by just over 100,000 ballots, thanks to strong support in California and New York. But the man who was widely dismissed as a joke when he announced his candidacy in June 2015 won a more convincing victory than even many supporters had believed possible.

In addition to winning Florida, Ohio, and North Carolina, Mr Trump’s appeal to working-class voters in the Midwest won him Pennsylvania — by 67,902 votes — and Wisconsin — by 26,788. Those states that had not backed a Republican since 1988 and 1984, respectively.

John Authers
Donald Trump and the bonfire of the certainties 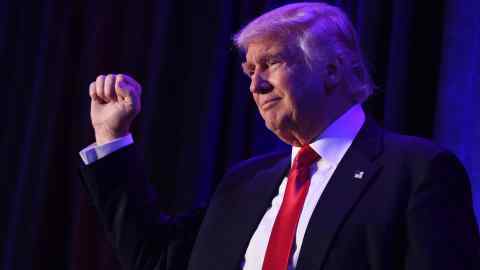 “It’s surprising, but [Mrs Clinton] winning Philadelphia and its upscale suburbs was clearly not enough to offset the record losses among white blue-collar voters in the rest of [Pennsylvania],” said Brendan Boyle, a Democratic congressman. “There is no question the Democratic Party needs to do a much better job in reaching out to these voters, who used to be reliably Democratic.”

In Michigan, another industrial state where Democrats have long counted on strong union support, Mr Trump won by 15,611 votes. In New Hampshire, his margin was 307 votes.

Coupled with the Republican victories in the House and Senate, the results provide Mr Trump with a clean slate of power that Republicans have not enjoyed since the Reagan era.

With one position still unfilled on the nine-member Supreme Court, and the possibility of further age-related vacancies over the next four years, the new president is also likely to have a lasting impact on the third branch of government.

While many conservatives worried that Mr Trump was really a New York liberal who would not support their views, they accepted his candidacy after he unveiled a list of possible Supreme Court justices who were considered acceptable.

Before the Associated Press called the race at 2.30am New York time, John Podesta, Mrs Clinton’s campaign chairman, told shell-shocked supporters at Manhattan’s Javits Center to go home, indicating that the former secretary of state had no plans to speak.

At Mr Trump’s election night event in the Hilton Hotel in Manhattan, supporters became increasingly euphoric as news of his wins came through on large screens either side of the ballroom stage. As Fox News called Wisconsin and Iowa for Mr Trump the crowd erupted with shouts of “USA, USA”, while images of despondent Democratic supporters at Mrs Clinton’s gathering prompted boos and shouts of “drain the swamp”.

Live event: Making sense of the US election

“Thank God for Donald Trump. This is once in 10 lifetimes that you see something like this,” said Joe Sparacio, a New York lawyer who had volunteered for the candidate and lived in one of Mr Trump’s father’s buildings as a boy. “The American people are the greatest and they are a lot smarter than all these politicians give them credit for.”

By contrast, the initially jubilant Clinton campaign party soon turned sour as returns showed the tightening races in Virginia, Michigan, and Pennsylvania and Mr Trump running away with Ohio and Florida.

In the VIP audience, Mrs Clinton’s friends and supporters stood shell-shocked underneath a glass ceiling that remained decidedly un-shattered, as people close to the campaign tried to comprehend how their internal polling had been so wrong.

Vin Weber, a former congressman who is close to House speaker Paul Ryan and was a vocal critic of Mr Trump, said: “America’s role in the world is suddenly an open question. But I wouldn’t assume the worst. I’d assume a question mark.”

Around the world, Mr Trump’s victory triggered strong reactions from US allies and populist politicians.

US presidential election
US voters chose Trump. Now what? 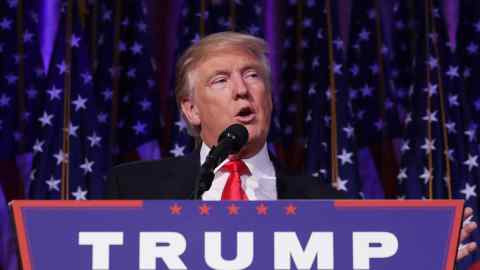 Vladimir Putin, Russian president, said: “Russia is ready and wants to restore fully fledged relations with the US. It won’t be easy, but we’re prepared to do our part.”

Theresa May, UK prime minister, promised to work with Mr Trump to bolster the so-called “special relationship” between Britain and America.

“We are, and will remain, strong and close partners on trade, security and defence. I look forward to working with president-elect Donald Trump, building on these ties to ensure the security and prosperity of our nations in the years ahead,” she said.

“President-elect Trump is a true friend of the State of Israel, and I look forward to working with him to advance security, stability and peace in our region,” Mr Netanyahu said.