How to dress glamorously at home

Why can’t you look cool in the kitchen?” asks Batsheva Hay. The New York designer, who launched her namesake clothing label in 2016, has a habit of infusing the dowdy with desirability. After igniting the trend for the prairie dress that held sway in recent summers, Hay is dusting off another vintage throwback – the 1950s house dress. “I’ve always been fascinated with the way women dress for their lives at home,” she says. “The house dress is traditionally something that you can just come home and throw on. I’ve never been a sweatpants person; this is a pretty but comfortable alternative.”

For Hay, the blending that’s come with lockdown life has only served to accelerate our tastes for such informal fashion. “The way we dress is so connected to how we feel,” she says. “At a time when we’ve been denied a lot of pleasure and identity, it’s nice to show ways that living at home can be fun. You don’t want to wear a tailored blazer, but you might want to create some excitement by putting on a house dress in a crazy print.”

Originally marketed as duster coats, her simple, one-size button-downs – created in small quantities from off-cut fabrics – were part of her s/s ’20 collection. But the dresses were largely overlooked – until lockdown. Now, she says, they’re selling as fast as she can make them. The style was born when her husband, the fashion photographer Alexei Hay, picked up an original housecoat for her from a Jewish Orthodox neighbourhood. “At first I was insulted,” she says. “It seemed to me like this horrible cloak. But later, when I actually put it on, it felt chic in a revolutionary way.”

The house dress is part of a broader move by Hay into the domiciliary domain. She recently launched a furniture and home collection that includes chintzy armchairs with contrast leopard prints, and aprons and oven gloves in unexpected fabrications, including holographic lamé. The idea is to inject some drama into the everyday. “They’re all things that women are told to be ashamed of, that make you feel dowdy or frumpy at home,” says Hay. “I like to give them a twist, to make them feel more interesting and celebratory.”

Shoe designer Olivia Morris is also overhauling ideas of domesticity. Launched last September, Olivia Morris At Home – a line of house shoes, garden sliders, socks and accessories – is a reflection of her own needs working from a home studio in the East Sussex town of Saint Leonards-on-Sea. “On a selfish level, I just don’t want to put on a stiletto or spend £600 on a pair of heels any more,” she says. The result is the almond-toed, bow-embellished loveliness that is the Daphne slipper. Named for her daughter and her favourite winter flower, this lightweight mule is made to gently hold the foot without too much click-clacking. It’s about as orthopedically comfy as possible.

Put on your house shoes and dance around the kitchen

Even before our lives became so home-centric, Morris saw a gap in the market for a seasonless slipper that could be worn around the house, while being smart enough to stash under your desk for work or wear to a friend’s for dinner. On her moodboard are Donna Summer and Marlene Dietrich, captured in cool repose, and the kind of yesteryear housewives who’d lounge glamorously in satin gowns, martinis in hand. “The culture of the house shoe goes back to the 18th and 19th centuries, when women would wear beautiful satin slippers inside and lace-up boots outdoors,” she explains. “Much like in Japan, you would never wear your outside shoes at home.” Her house shoes have the power to lift the spirits. “Even when you’re alone, you sometimes just want to cheer yourself up,” she says. “You can put on your slippers, turn on the Sonos and dance around the kitchen.”

Other designers are also shifting towards pieces that can bring excitement to at-home attire. Amber Symond established Common Hours, a line of highly crafted reversible robes that has just come to MatchesFashion, because she “wanted to make a versatile garment that could be worn anywhere, any time”, she says. “To me, dressing is about confounding expectations, and wearing what’s inspiring and fun.” These limited-edition painterly gowns riff on the shape and structure of the smoking jacket and kimono, and are inspired by different forms of art. One silk robe is adorned with a Paul Colin portrait of Josephine Baker at La Revue Nègre; another features a shot of a macaw from the Dutch taxidermists Darwin, Sinke & van Tongeren; there are inscriptions of the words of Oscar Wilde; and the lyrics of 1980s Scottish indie band The Jesus and Mary Chain. “To me, they’re art pieces,” she says of the robes, which are hand-embroidered by Indian artisans in Mumbai, using silks sourced from Paris to Lake Como to Japan, and made in Symond’s Sydney studio. The real boon of the robe is its effortless elegance. Symond envisages wearing hers to brunch or a black-tie event. “It isn’t fussy or highly tailored but it’s as impactful as a suit,” she says. “While you’re pent up at home, it can bring a sense of expression. Even while you’re doing the washing up it looks fantastic.”

The desire for clothes that seamlessly transition between work and rest also compelled friends Bailey Meredith and Greta van der Star to establish General Sleep. The New Zealand brand conjures clever pyjama sets and night shirts that double as daywear. Its classic pyjama shirting and balloon-sleeved wrap nightdresses are conceived to carry you from bed to the beach (or, more likely right now, the next Zoom call) and beyond. “Historically, pyjamas were worn to the Venice Lido – a trend that was started by Coco Chanel,” says van der Star. “They’re a great sun layer that helps to make holiday packing that little bit lighter.” Inverting the idea that bedwear is intimate, the General Sleep philosophy is that a well-designed garment can do it all.

Goodnight, Zoom: in praise of bed
The posh pyjamas enjoying a Zoom boom 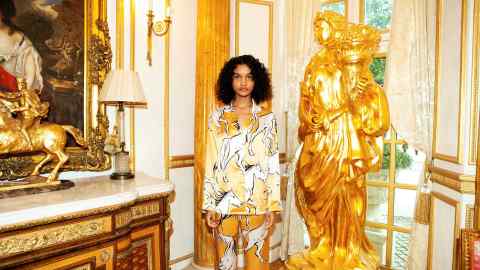 Beyond ease and versatility, it’s comfort that’s currently being cherished above all. At the height of the first lockdown, sales of the playful printed pyjama brand Desmond & Dempsey increased by 400 per cent. Struggling to keep pace with demand, founders Molly Goddard and Joel Jeffery have had a chance to double down on their guiding principle of celebrating life at home. “We’ve always been driven by this idea of making unfancy things feel fancy,” says Goddard. “What we wear has the ability to alter our mood and mindset. Even with a bowl of pasta on your lap, if you’re dressed in a pair of smart, maximalist pyjamas, you don’t feel like a slob.” One of the brand’s biggest recent growth areas has been among men.

Duncan Campbell initially imagined his collection of printed pyjama shirts for the menswear brand Drake’s as a holiday hero that could be worn from beach to dinner to dancefloor. Covid has seen it morph into “something that’s lovely to wear to waft around the house instead”. Devised with Charlotte Rey, his partner in the design and creative consultancy firm Campbell-Rey, the collection has an obvious multitasking, unisex appeal. “We had this fantasy of a wild night out in Venice,” says Campbell. “Instead, I’ve been wearing mine as eveningwear. Rather than revert to complete couch-potato mode, I’ve been making an effort to dress up a bit for dinner at the weekends. Wearing the shirt with cords and Venetian slippers makes nights in feel like more of an occasion.”

Drawing inspiration from the cinematic wardrobes of actor Alain Delon and Anthony Minghella’s cult 1999 thriller The Talented Mr Ripley, the collection is named for Venice’s only nightclub – the Piccolo Mondo. But since this favourite haunt of Peggy Guggenheim is currently closed for the foreseeable, this season an outing to the kitchen disco will have to do.