What to see at Design Miami’s 2019 Basel fair

Art and design collides in a selection of inventive lighting, eco eyewear and a double swing

The decorative arts fair Design Miami has sometimes appeared to be overshadowed by its neighbouring event, Art Basel. But this year, it felt like it had found its feet. If 14 years seems like a long time for that, I’d put it down to an increasing alignment between art and design practice and an increasing emphasis on contemporary work where the two collide nicely. Where once Design Miami majored on high-ticket rarities from the early to mid-20th century — sumptuous suites of furniture from the plush salons of Italy and France — and contemporary practitioners focused mostly on function, today’s designers are playing confidently across these boundaries.

“I don’t ever want to be an artist,” says Lindsey Adelman, a New York designer who specialises in lighting, “but I don’t think you need to separate sculpture from something that lights your dining room.” The works on her booth are carefully calibrated accretions of forms (from big soft bubbles to spiky spheres) in clear moulded glass, mostly derived from the history of glass making. A huge chandelier looks as if it could disperse its many parts at any moment. “It doesn’t feel safe, for sure,” says Adelman. “I really want to make work that elicits emotion.”

Adelman pushes technology to reach these ends, playing with LEDs and inventing fixings that allow these explosive pieces to be as functional as they are evocative. This marriage of high aesthetics and utility is one of the fair’s key themes. At Maniera, for example, the Brussels-based gallery that specialises in working with architects to create furniture, a show-stopping screen curves almost 10 metres across the booth. It’s a co-production between the architects Kersten Geers and David van Severen and the artist Pieter Vermeersch, who is known for his ethereal gradient colour works. Here, the graduated colour, from palest yellow to pink, has been applied to slats which are backed in mirror: just one turn of a handle converts the surface from mediative calm to 1970s disco.

OrtaMiklos are the French/Danish pairing of 25- and 26-year-old Leo Orta and Viktor Miklos, who show with the barely one-year-old Functional Art Gallery from Berlin. They happily name their sources, from the typology-blurring furniture of Franz West to the playfully decorative work of the 1980s Italian Memphis group. Their Giraffe light pays even closer homage to Sarah Lucas: its stand is made from concrete set inside a tied stocking to create the effect of a supersized string of beads.

But there are even more unlikely eventualities at the fair. Floris Wubben, for example, has made a three-metre-long table in ceramic (at LA/New York gallery The Future Perfect, founded by David Aldaheff in 2003). It is finished in a glaze so lusciously shiny as to look gooey and wet. Wubben, who drove the table from Amsterdam to Basel himself, was a rather more standard furniture maker until he moved into clay. “That’s when I started working outside of conventions,” he says. “In fact, I think it’s the responsibility of designers to break boundaries.”

One wonders how that conversation went at Galerie kreo, where a double swing slick with glossy black car paint by Jean Baptiste Fastrez (born 1984), appeared like the bastard child of Fragonard and something Christian Grey might have in his back garden. Still, it was doing a fine job reeling in punters who couldn’t resist the instantaneous return to childhood offered by having a quick go (not to mention the Instagram moment it provided).

There are, of course, other responsibilities that designers have to face. This fair is framed by the Design at Large exhibition on its ground floor, where the fair’s new curatorial director Aric Chen presents nine projects by designers which aim to raise awareness of the irreversible damage we’ve inflicted on the world. Among those practitioners is the octogenarian Andrea Branzi, who once said that the definitive achievement of humans in the late 20th century was to recognise that we’ve created problems we can’t solve.

Still, there are changes that art fairs can make to reduce their carbon footprint. The UK-based pressure group A Plastic World has been enlisted to ensure all the fair’s catering is free of single-use plastic. And the usual VIP cards have been replaced with more eco-friendly fabric wristbands.

Lisa Schiff, the one-time art adviser to Leonardo DiCaprio, was doing a roaring trade at the fair’s opening selling her newly minted eyewear created with artist Ugo Rondinone, at $350 a pop, to a clientele thrilled by its environmental neutrality. The frames are in a completely biodegradable plastic, the lenses in natural mineral glass.

Here to remind us that environmental awareness wasn’t invented yesterday is the work of José Zanine Caldas, a self-taught and politically driven Brazilian designer whose work is currently finding favour for its rugged sensuality and the fact that it is often made from recycled wood.

The Parisian gallery Chastel Marechal has acquired an exceptional piece, direct from the house it was designed for in the early 1970s, near the beach outside Rio de Janeiro. A sofa several metres long, fashioned from an abandoned indigenous canoe, it is rough and glamorous in equal parts, and still with a slight whiff of the seaside location it was made for. For many reasons, it is the star of the show. 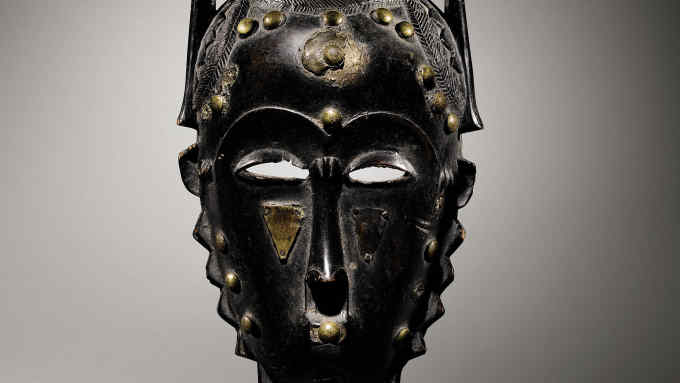