Goldman Sachs is aiming to meet medium-term targets set out in its turnround plan even though the bank’s latest results were dragged back by almost $1bn in provisions for losses on loans to its investment bank clients.

The bank, which is pivoting from its Wall Street roots to become a broader financial services company, reported a 46 per cent fall in net income to $1.2bn for the first quarter of the year on Wednesday, as it ratcheted up provisions for loan losses. It also took a total $1bn in writedowns on private and public equity assets held by its merchant bank.

“The strategic direction we laid out for the firm remains no less compelling,” David Solomon, chief executive, said. He added that Goldman would accelerate its plans in some areas of business, including its transaction bank where corporate deposits of $9bn had “exceeded expectations”.

On a call with analysts, both Mr Solomon and Stephen Scherr, chief financial officer, signalled that the bank might delay some investments detailed in its strategic plan. This included an undisclosed sum set aside to upgrade technology platforms for its existing businesses, and building up new business including cash management and consumer banking.

Mr Scherr stressed that bank was still pursuing its medium-term targets on efficiency, though progress on a three-year $1.3bn cost saving plan would not be seen until the second half of the year. 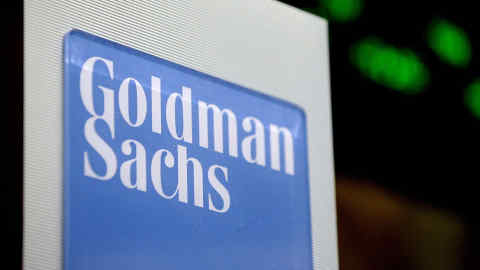 “I think it is the right message as nobody knows the outcome of how revenues will look like through the rest of the year,” said Kian Abouhossein, analyst at JPMorgan. “The message is positive as it illustrates cost flexibility in case revenues decline.”

Goldman’s investment banking revenue rose 25 per cent year on year, beating its peers, while its trading powerhouse posted a 28 per cent rise in revenues in the first quarter, including the best quarter for fixed income trading in five years.

Mr Solomon said clients continued to be “very, very active” in the early part of the second quarter, although there was “no guarantee obviously that continues as we go through the quarter”.

Glenn Schorr, analyst at Evercore ISI, said Goldman’s results were “a little bit better than expectations”, thanks to investment banking revenues and fixed income trading. He added that Goldman “will have to weather a near-term fall-off in capital markets revenues as markets normalise”.

Overall, Goldman did better than the 69 per cent drop in net income at JPMorgan Chase and the 46 per cent fall for Citigroup. “It’s just business mix,” said Marty Mosby, analyst at Vining Sparks, noting that the capital markets areas that Goldman has heavy exposure to “did so well” in the first quarter, while credit losses would be bigger at the universal banks.

Bucking the trend, Goldman shares rose 1.7 per cent to about $181 each in New York trading on Wednesday, while its main street counterparts were weaker.