Europe’s metals industry will be hit with another wave of curtailments and closures unless steps are taken to address soaring energy prices, a group that represents some of the region’s biggest producers has warned.

“Without stronger EU and member state action, there is a real risk of further curtailments and closures in our sector, to the detriment of Europe’s strategic autonomy goals,” said the letter, which also makes the case for emergency state aid.

The plea comes days after France, which has just taken on the rotating presidency of the EU Council, convened a conference on the actions needed to secure European supplies of critical raw materials such as industrial metals.

Large industrial consumers such as car manufacturers have been forced to import metal, often with a higher carbon footprint, from the US or China.

Aluminium Dunkerque, Europe’s largest producer of the metal, has cut production by 15 per cent while Nyrstar, the zinc producer owned by commodity trader Trafigura, has mothballed a 150,000-tonne-a-year smelter in Auby, northern France, and halved output at three other sites.

Goldman Sachs estimated that 820,000 tonnes of primary aluminium capacity and 750,000 of primary refined zinc smelting capacity had been suspended across Europe in recent months. 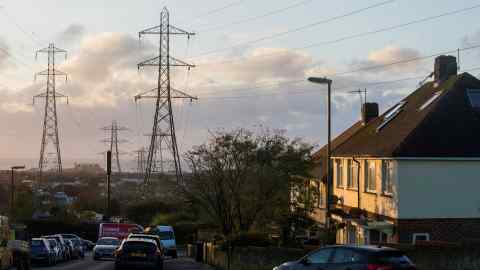 It said an aluminium smelter in Europe fully exposed to market-power pricing in the fourth quarter of last year would have lost $1,000 on every tonne of metal produced. For zinc smelters, the equivalent loss would have been $540 a tonne.

Non-ferrous metals including aluminium, copper, zinc and silicon are significantly more energy intensive to produce than other metals such as steel, with electricity costs accounting for up to 40 per cent of production costs even before last year’s energy price spike.

Aluminium, used in everything from cars to power lines, is often referred to as solid electricity because of the large amounts of power required to transform its key ingredient, alumina, into refined metal.

If today’s high electricity prices became systemic, Eurometaux said Europe, which had traditionally shielded its aluminium smelter sector through import tariffs, would not be able to sustainably produce the metals needed to produce batteries for electric vehicles or to make wind turbines and solar panels. That risks undermining the bloc’s plans to tackle climate change, known as the Green Deal. The EU has a goal to reduce net greenhouse gas emissions by 55 per cent from 1990 levels by 2030.

“The reality is that the increasing global metals demand is currently being met by new refining capacity in other parts of the world,” the letter stated.

Traders expect energy prices across the continent to remain elevated over as Europe seeks to refill its gas storage. That means there will be little respite for for metal producers in the near term.

While Brussels has published a “toolbox” of options to deal with the price surge, such as direct income support and tax breaks, Eurometaux said concrete action was needed to prevent a “decade of repeating power price spikes”.

Its suggestions include the use of strategic reserves to stabilise gas prices, capping the cost of carbon in the EU and the swift development of an emergency state aid framework allowing member states to take quick action, similar to the one used during the pandemic.

Member countries should also reduce or cap taxes and surges on electricity for heavy, industrial uses, it said.

“While power prices have increased in many countries across the globe, European producers have been worst hit,” the letter stated. “This is because industries in most countries outside Europe benefit from regulated tariffs set by local governments or benefit from favourable power purchase agreements which hedge them against the recent price increase.”

Get alerts on Energy crisis when a new story is published