Dan McCrum in London and Olaf Storbeck in Frankfurt

Shares in Wirecard crashed more than 60 per cent when auditors of the fintech group, which was once regarded as a star of the German tech sector, warned that €1.9bn was missing from its accounts.

Wirecard, which is based in a Munich suburb, processes tens of billions of euros in credit and debit transactions each year. However, it has spent the past 18 months battling to allay concerns over its accounting practices.

Its shares plunged on Thursday when it was told by EY that there were indications a trustee of Wirecard bank accounts had attempted “to deceive the auditor” and may have provided “spurious cash balances”.

Markus Braun, its chief executive and largest shareholder, propelled Wirecard into Germany’s prestigious Dax 30 index two years ago when the company had a market capitalisation of €24bn. After Thursday’s fall its market value is less than €5bn.

The EY disclosure left Wirecard unable to release its 2019 results as promised on Thursday. It gives banks the option to terminate €2bn of loans if the results are not published on Friday.

In a statement, Wirecard said it was “working intensively together with the auditor towards a clarification of the situation”. By Thursday evening it had announced that its chief operating officer Jan Marsalek has been suspended “on a revocable basis” until June 30.

The Financial Times reported in October that Wirecard staff appeared to have conspired to fraudulently inflate sales and profits at Wirecard subsidiaries in Dubai and Dublin and mislead EY, the group’s auditor for a decade.

Then in December, the FT reported that so-called escrow accounts, controlled on behalf of Wirecard and certain partners by trustees, had been used to boost the group’s cash balances.

Germany’s largest asset manager, DWS, one of Wirecard’s largest shareholders, said it was evaluating legal steps against the company.

Ingo Speich, head of sustainability and corporate governance at Deka Investment, one of Wirecard’s largest shareholders, said: “We look at the situation in disbelief. A fresh start with regard to management is more urgent than ever.” Mr Speich has previously called for the dismissal of Mr Braun.

In a statement on Thursday, Mr Braun said that “previously issued confirmations by the banks were no longer recognised by the auditor”. He added that “it is currently unclear whether fraudulent transactions to the detriment of Wirecard have occurred”.

Wirecard has postponed the publication of its 2019 results three times since March, but has told investors repeatedly that it “expects an unqualified audit opinion”.

If the company does not publish audited results by June 19, it will breach a covenant of a €1.75bn revolving credit facility arranged by Commerzbank, ING, ABN Amro and LBBW and which involves a number of other lenders.

Last year the company commissioned a special audit by KPMG in an attempt to dispel worries over its accounting after whistleblowers had raised concerns.

The six-month special audit by KPMG was unable to resolve questions about the group’s accounting. Forensic examiners could not trace transactions underpinning “the lion’s share” of Wirecard profits reported between 2016 and 2018, according to the results of the audit published in late April.

Cash generated by the suspect business was directed largely into escrow accounts managed on behalf of Wirecard and its partners by a trustee. KPMG said it could not independently confirm the existence of €1bn of cash in such accounts, and that the trustee cut ties to Wirecard at around the time the special audit began.

Wirecard now faces multiple investigations into its accounting, its disclosures to investors as well as trading in the company’s shares by Mr Braun. BaFin, Germany’s financial markets regulator, said it would “take the current developments into account” in its investigation into potential market manipulation by Wirecard.

The US Department of Justice is also investigating a hacker-for-hire group that targeted thousands of individuals globally, in which one cluster of victims included journalists, hedge funds and researchers critical of Wirecard.

Concerns over the group’s accounting also persuaded hedge funds to bet against its shares. The collapse of the stock has delivered gains of as much as €740m for eight hedge funds, including Chris Hohn’s London-based TCI Fund Management and Marshall Wace, according to Breakout Point, a Düsseldorf-based data group.

Wirecard has always denied any wrongdoing. It has spent more than a year playing down questions over its accounting, since the FT reported whistleblower allegations that staff in the group’s Asian headquarters in Singapore had forged documents to deceive regulators and auditors.

After Wirecard’s Singapore offices were raided by police last year, BaFin, announced a two-month ban on short selling Wirecard stock to protect the company from speculators.

Wirecard had €1.8bn of debt outstanding at the end of September, at which time the Munich bank it controls held €1.7bn of customer deposits. A €500m bond issued by the company that month was quoted below 40 cents on the euro on Thursday.

Wirecard has sued the FT over its reporting, alleging infringement of trade secrets — a claim that the FT rejects and is defending. 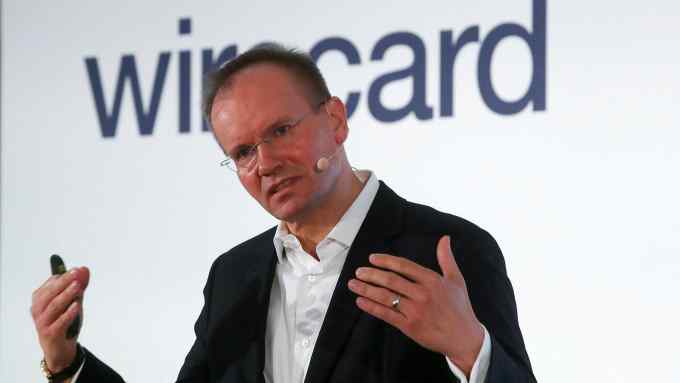