The writer is head of research at Gavekal Dragonomics and author of ‘China’s Economy: What Everyone Needs to Know’

China last year had the quickest economic recovery from the coronavirus pandemic of any major country. This year could be the first since the 1970s in which it grows more slowly than the US. Is China fading?

In a word, no. China’s economy is in good shape, and policymakers are exploiting this strength to tackle structural issues such as financial leverage, internet regulation and their desire to make technology the main driver of investment.

The growth comparison with the US misleads, since year-on-year figures tell us about the timing of post-Covid recoveries, not underlying growth potential. China got the coronavirus under control earlier than anyone else, and enjoyed a strong rebound which peaked in the first quarter of 2021.

The US struggled for longer, and will book most of its post-Covid recovery this year. On a two-year average basis, China is growing at about 5 per cent, while the US is well under 1 per cent. By the end of 2021 the US should be back around its pre-pandemic trend of 2.5 per cent annual growth. Over the next several years, China will probably keep growing at nearly twice the US rate.

China’s growth outlook helps explain the rally in the renminbi. Over the past year, the Chinese currency has risen 11 per cent against the dollar. And after a lacklustre first quarter, the Chinese unit has gone up 2 per cent against the dollar since April 1. In part, this is a mechanical response to a dollar that is now structurally weakening. But it also reflects underlying Chinese strengths.

The export sector continues to outperform, despite three years of Donald Trump’s trade war and Covid disruptions. This testifies to China’s robustness as a manufacturing base, the breadth of goods that it can produce and the skill of its exporters in navigating tough times.

Capital inflows are another factor. China has long been the world’s second-leading destination for direct investment, behind the US, drawing in close to $150bn a year and (perhaps temporarily due to Covid) took over the top spot in 2020. This will continue, as multinationals see China as crucial to their global strategies.

The big change is in portfolio flows, negligible a few years ago but now substantial. Since 2017, foreign investors have tripled their holdings of Chinese bonds, to about Rmb3.6tn ($559bn), and now own about 3.5 per cent of the market. Equity inflows have been comparable.

Cyclically, Chinese equity markets are taking a breather, as corporate profits have topped out and credit policy is tightening. Bonds are more attractive: China is the only major sovereign issuer to offer positive real yields. Over the long run, both equity and bond investors will want to increase their China exposure.

The key question now is not the pace of China’s growth but its composition.

Despite many calls for China to “rebalance” its economy from an investment-led to a consumption-led model, this is not what the country’s leadership intends. They believe investment drives growth, with incomes and consumption following in its wake. The role of policy is not to support demand but to direct capital to the right investments.

For the past two decades, housing and infrastructure have been big investment drivers, as China urbanised. Their growth contribution is already in decline, and will have to shrink much more for China to hit its target of capping carbon emissions by 2030. Production of steel, cement and other construction materials generate the lion’s share of China’s CO2 emissions.

Beijing has already imposed steel production curbs. It will need to do much more to rein in heavy industry. Controlling financial leverage is also critical, since much of China’s debt is taken on by local governments to finance infrastructure, housing developers and state enterprises in heavy industry. 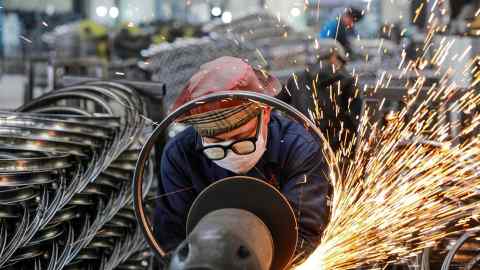 The desired new investment driver is high technology and it is being backed by policies including the Made In China 2025 programme to upgrade manufacturing capabilities and massive funding for new semiconductor plants. Beijing’s technology vision prioritises hardware investments over the consumer internet. Even as it pours money into plants and factories, it is tightening regulations on the big internet companies, both to control financial and market risks and to limit the political power of these privately owned behemoths.

This policy orientation may look questionable to those brought up on the demand-side orthodoxy of western economies. But China’s investment-led approach has delivered high returns for many years, and there is good reason to think it will keep doing so in the coming decade.