Trojan horse or inflated threat — what does the TTIP mean for the NHS?

Of all the concerns raised about the Transatlantic Trade and Investment Partnership (TTIP) in the UK, the potential implications for the National Health Service are arguably the most politically sensitive.

Activists have claimed the trade deal would become a Trojan horse for private health providers, who would seek to exploit the agreement as a means of gaining greater access both to Britain’s taxpayer-funded health service and to other, similar systems in Europe.

But supporters argue there will be clear benefits to businesses and individuals if the UK is able more easily to export to the US its products and expertise in pharmaceuticals, innovative treatments and devices.

The NHS Confederation, which represents health service managers, produced its own document exploring the arguments for both sides: “A more integrated transatlantic marketplace could foster economic growth, create jobs and stimulate fruitful collaboration in leading-edge technologies, to the benefit of patients,” it said.

Fears to the contrary have failed to lose their potency over the three years since the TTIP talks began, despite the repeated insistence of the European negotiators that safeguards would prevent any interference in public health policy.

In the UK, the threat plays to a wider concern over the prospect of private providers taking on a larger role in Britain’s cherished behemoth of a health system, which employs about one in 20 of the country’s labour force.

British distaste for greater private sector involvement as antipathetical to the values of the NHS may baffle those elsewhere in Europe, where private sector participation, as part of a mixed economy of provision, is commonplace.

The current bitterly-fought campaign over whether Britain should remain in the EU — framed by “Leave” campaigners in part as a battle to protect the nation’s sovereignty — has added another problematic dimension.

In a speech in London last year, Cecilia Malmström, European commissioner for trade, set out to reassure sceptics that TTIP would have no negative implications for the NHS.

Assuring her audience that it would not change Europe’s laws on hormone treated beef and genetically modified food, Ms Malmström said: “The EU has a tried-and-tested system of legal reservations and exceptions that make sure that trade agreements don’t affect EU governments’ freedom to organise their public services how they want to. We will use them again in TTIP.”

“Let me be clear on this,” she added, “we in Brussels understand and admire the principle of fairness that lies behind the NHS.”

Specifically, the European Commission has highlighted the Comprehensive Economic and Trade Agreement (CETA) negotiated with Canada as a model for the kind of protections it would secure.

The Commission’s website declares that the accord will “tackle a whole range of issues to make business with Canada easier”. It would remove customs duties, end limitations in access to public contracts, open-up the services’ market, offer predictable conditions for investors “and, last but not least, help prevent illegal copying of EU innovations and traditional products”.

The agreement, it says, also contains “all the guarantees to make sure that the economic gains do not come [at the] expense of democracy, environment or consumers’ health and safety”.

But such assurances have failed to quieten critics, prominent among them Britain’s largest trade union, Unite. Legal advice it commissioned in February this year, from Michael Bowsher QC, “clearly shows TTIP poses a real and serious risk to the NHS”, according to Gail Cartmail, assistant general secretary at Unite.

In its own analysis of the implications of TTIP, the NHS Confederation highlights the possibility that the treaty will include a “highly contentious” Investor-to-State Dispute Settlement (ISDS) mechanism, which would protect investors against unfair treatment or discrimination on grounds of nationality.

US trade
The TTIP has missed its political moment 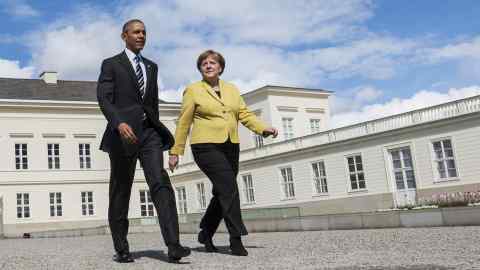 The Confederation says the ISDS mechanism has in the past been used by companies to oppose public health measures being introduced by governments. It cites tobacco giant Philip Morris’s challenge to the Australian government on the introduction of plain packaging for cigarettes.

This has led to concern that, post-TTIP, American companies would be able to sue a future UK government if they considered their interests had been damaged by domestic legislation.

There is some evidence that it would be hard even for a successful ISDS challenge to force changes in government policy, however. In a letter sent to John Healey, the Labour MP and then-chair of the all-party parliamentary group on EU-US trade and investment, the EU chief negotiator Ignacio Garcia Bercero said: “We can state with confidence that any ISDS provisions in TTIP could have no impact on the UK’s sovereign right to make changes to the NHS.”

Yet opponents worry that this would not preclude what the Confederation dubs a “policy freeze” — a situation in which politicians are deterred from introducing certain kinds of legislation because they fear they could be vulnerable to a challenge under an ISDS.

Should the final agreement include an ISDS, “we would wish to see very strong safeguards built in so that this mechanism cannot be used to frustrate the public policy intentions of elected member state governments,” the NHS concluded.

Unite, meanwhile, is continuing to press for further assurances, on behalf of its members. Ms Cartmail, who has written to commissioner Malmström requesting a meeting, says a recent gathering between Unite, its lawyers and the European Commission “left it clear that TTIP could be used to sue the UK government over decisions about the NHS”.

“The only way to neutralise that threat is for David Cameron to give a cast iron guarantee that he will exclude the NHS from the trade agreement,” she declared.