We use cookies (opens in new window) for a number of reasons, such as keeping FT Sites reliable and secure, personalising content and ads, providing social media features and to analyse how our Sites are used.
Manage cookies
Accept & continue
Fashion shows

Street-style photographer turned designer Tommy Ton knows all about wearable clothes. So does The Row

When 34-year-old street photographer Tommy Ton was approached about taking on the creative direction of the New York label Deveaux, which launched in 2016, he realised a childhood fantasy that had until then seemed unattainable. “I dreamt of becoming a designer as a teenager growing up in Canada,” he said before his debut show on the city’s schedule. “But then I spent 10 years on a very different road.”

That road, however (or at least the very many pavements of the global fashion cities on which Ton trained his lens), has given him a unique insight into how modern men and women dress. “I’ve spent a decade doing demographic research,” he added. “Well, I could call it that. Mostly I just love people watching.”

The collection was inspired by those people who Ton has always admired at the shows — often those with an empathy for minimalism and an affection for androgyny and earthy neutrals. The casting took in men and women of many different decades, and the models (many of whom were more like muses) walked around each other as though out in the world. Sometimes they exchanged a piece of clothing — a women in a long silk slip was fitted with a tweed overcoat by a fella. They ended up walking in pairs. It was sweet — this was inclusivism at its most gentle and endearing.

Certainly the collection owed a nod to Phoebe Philo’s old Celine inasmuch as it had the same sensibility: the emphasis on form and functionality, the priority on comfort, and in the generous but flattering silhouettes. Ton had taken pains with the details; trousers skimmed the ankle bones (instead of sweeping long along the floor) and were worn with classic loafers. Coats were made for throwing over layers. The tailoring was sharp but not restrictive; a cashmere sweater had an integrated shawl scarf that, when worn wrapped around the shoulders over a long silk skirt, looked easy and elegant for evening. The clothes were primarily day focused but, as Ton pointed out, an ivory tuxedo suit layered with a shawl-neck shirt would “be a great thing to wear to a wedding.”

Matches Fashion have already picked up the menswear, and Bergdorf Goodman, Net-a-Porter and Moda Operandi have taken up the women’s. I expect more stockists will follow. Ton may not be a designer in the classic tradition — he’s a curator. His collection was not revolutionary. It was better than that. The clothes looked as comfortable as an embrace and were absolutely effortless. I would have happily worn the lot.

Likewise at The Row, where, after a short abstention, the sisters Mary Kate and Ashley Olsen were showing again. Thank god! The Row show, with its essential hallmarks, such as the coffee for the guests, the mid-century furnishings, the ornamental geodes around the showspace, not to mention seeing the designers walking among us, in real life, like seeing a unicorn, is for me a seasonal highlight. The Row offers the ultimate lifestyle fantasy — an alternate universe in which everything is delightfully tasteful and eye-wateringly expensive. In fact, I’ve often thought that the Olsens’ dedication to the coffee bean is so diligent they should open a café called The Rowsted. They could serve everything in giant compostable branded cups, and offer not a scrap of food.

At Home with the FT
Nicole Farhi: ‘I love art profoundly in a way I never loved fashion’ 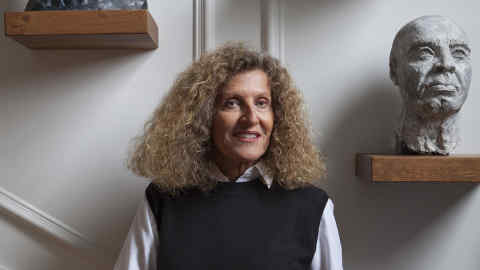 Their AW19 collection was not much of a departure from their usual fluid take on luxurious androgyny: trouser suits with single-breasted jackets buttoned to the side, and simple white shirts with an oversized funnel neck or exaggerated cuffs. Robe coats in camel and a stiffer car coat shape in chocolate-coloured leather; 50 shades of brown. If there was a distinction, it was that the silhouette was neater, the line contoured at the waist. Previous seasons have seen some garments look slightly overwhelming: this collection had cinched it in, but without looking prissy or feminised. Perhaps this was The Row version of body con? Whatever, it worked brilliantly well. The looks were worn with the sheerest of lace espadrilles (marvellously creepy) or a thick-soled zipped boot. It was all typically desirable.

For modern luxury brands, this is the time to seize the market. It’s been more than a year since Philo departed from Celine and left her acolytes grieving: the last few vestiges of her tenure are now leaving the store. Second-hand or consignments sites such as The RealReal and Vestiaire have noted a sharp increase in Celine resales as customers stockpile her clothes. The question remains: what will the Philophiles buy next? Certainly, these two labels, despite having distinct and admirable qualities of their own, must be serious contenders for her money.