Evan Spiegel refuses to be scared of Facebook. Confidence helped the 27-year-old Snap chief executive take a photo messaging app from a Stanford University coursework project to an almost $20bn initial public offering. The threat of Facebook has been following all the way.

In 2013, when the company behind Snapchat was just two years old, its co-founder (his partner was a fellow student, Bobby Murphy) was quizzed on stage about Poke, Facebook’s first attempt at imitating the app’s photo messaging. “Certainly it is scary when a giant enters your space and you are a small company,” Mr Spiegel said at the TechCrunch Disrupt conference. He laughed it off: Poke failed, and that became the “greatest Christmas present we ever had”.

But the world’s largest social network does not give up and has relentlessly imitated Snapchat since Mr Spiegel turned down its $3bn acquisition offer in 2013. Earlier this year, just as Snap headed for the public markets, Facebook finally succeeded in popularising a version of “Stories” in four of its apps — the Snapchat feature that expires after 24 hours.

“Does Facebook scare you?” an analyst asked Mr Spiegel on his first earnings call in May. The co-founder snapped back with an unlikely analogy, comparing his lossmaking start-up to Google and Facebook to Yahoo: “Just because Yahoo, for example, has a search box, it doesn’t mean they are Google.”

This week investors showed they believe Mr Spiegel’s answer should be that he is afraid of Facebook. Morgan Stanley, the investment bank which led Snap’s IPO, dramatically revised its opinion of the stock, cutting its price target by more than 40 per cent. Shares were already hovering below the offer price. But they tumbled further on concerns that Snap is slow to convince marketers of the value of its ads, user growth is weaker than expected and it is facing intense competition from Facebook-owned Instagram.

Mr Spiegel, who dropped out of Stanford, was the first chief executive from a new wave of highly valued tech start-ups to brave the public markets. It paid off personally: he became a multi-billionaire when he took Snap public. 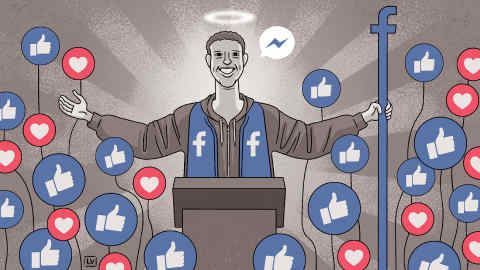 Praised as a product genius who instinctively understands the desires of his young audience, Mr Spiegel now has to learn to be a public company leader, managing the expectations of investors who want to compare Snap to Facebook and Mr Spiegel to Mark Zuckerberg.

But he is very different from the last young man to create a large consumer internet company from scratch. Mr Zuckerberg is a geeky engineer who spends his spare time coding his own smart systems for his home. He and his wife are philanthropists, and he has been travelling across the US to meet diverse communities: a tour that sparked speculation about a potential presidential run.

Mr Spiegel is a product designer, focused on making his app fun. Rather than set up in Silicon Valley, he based Snap in his hometown of Los Angeles, where he grew up the privileged son of wealthy lawyer parents. He still lives there, now with his supermodel wife, Miranda Kerr.

Mr Spiegel has a queasy relationship with publicity, after he was forced to apologise for sexist and sexually graphic emails he sent to his fraternity brothers while at college. He rarely gives interviews — but his May wedding to Kerr is due to be featured in next month’s US Vogue.

Snapchat is so frequently misunderstood by people over 40 that the Snap IPO filing had to explain that it is used for more than “sexting”. By designing the disappearing photos that made Snapchat famous, Mr Spiegel completely rethought the camera. Photos became transient conversations, not kept for posterity; social media became a way to be creative — and silly — with your close friends, not flick through a feed of near strangers.

Mitch Lasky, a venture capitalist at Benchmark, invested when Snap was a dozen people in Mr Spiegel’s father’s dining room. Mr Lasky told the Twenty Minute VC podcast this week that Evan is a “once in a generation talent . . . He has tremendous instincts about particularly young people’s desires . . . And at the same time, he has this incredible confidence. The combination of those elements is magical.”

Public market investors are more concerned with money than magic. With the company making greater losses than revenue, Mr Spiegel will have to bring his creativity to advertising, and be prepared to restyle it over and over again if Facebook continues to imitate.

Sir Martin Sorrell, chief executive of WPP, told the Financial Times it plans to double its spending to $200m on Snap this year. But, he added, WPP will spend over 10 times more on Facebook.

For an idea about how Mr Spiegel might really feel, we can turn to Ms Kerr. In an interview with The Times earlier this year, she complained about Facebook stealing her partner’s ideas: “I cannot stand Facebook,” she declared.

The writer is the FT’s San Francisco correspondent