AP Møller-Maersk warned that it was facing conditions significantly worse than the financial crisis after it plunged to a large net loss as global trade growth ground to a halt last year.

The Danish shipping-to-oil conglomerate has been hit by the slump in both petroleum prices and container freight rates in what its chief executive described as a “massive deterioration” in its business.

Nils Andersen told the Financial Times: “It is worse than in 2008. The oil price is as low as its lowest point in 2008-09 and has stayed there for a long time and doesn’t look like going up soon. Freight rates are lower. The external conditions are much worse but we are better prepared.”

Maersk’s shares, which have nearly halved in the past 10 months, fell another 8 per cent on Wednesday morning to DKr7495.

Maersk owns the world’s largest container shipping company and is seen as a bellwether for global trade, which it estimated grew just 0-1 per cent last year against double-digit growth before the financial crisis. It forecast an increase of 1-3 per cent this year, still below its post-crisis estimate of 4-5 per cent growth.

Despite this, capacity in the container shipping industry increased 8 per cent in 2015 and Maersk, which still has 27 new ships on order, has cancelled its options to buy any more.

Mr Andersen said global trade conditions had been “abnormal” last year with imports to Europe, Brazil, Russia and west Africa all falling — the latter due to the slump in oil prices. 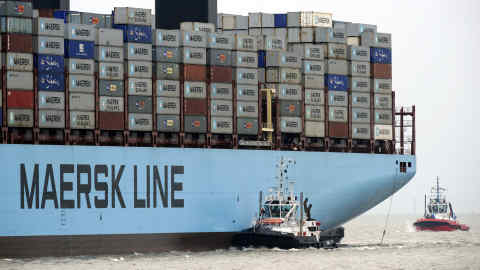 Maersk posted a net loss of $2.5bn in the fourth quarter as it wrote down the value of its oil assets in Kazakhstan, Kurdistan, the UK, Angola and Brazil by the same amount. Analysts had expected a profit of about $300m.

Its underlying profit for 2015 was $3.1bn, down from $4.5bn a year earlier, and the Danish group warned this year’s result would be “significantly below” that. Maersk Oil will make a loss this year as its break-even price for oil is $45-$55 per barrel, compared with the current price of Brent crude of $31. Maersk Line, its container shipping business, will post an underlying result significantly below last year’s $1.3bn.

But Mr Andersen tried to strike an upbeat note, arguing that Maersk had cut costs and lowered debt since the financial crisis, meaning it was in much better shape.

“We are very strongly placed not only to get through this period but benefit from it. We are quite enthusiastic about it,” he said, adding that the company would invest in growth and customers to “thereby steal a few steps on the competition”.

He said Maersk remained on the lookout for acquisitions in its oil, shipping and port terminals businesses but expected more in the way of bolt-on deals than blockbuster purchases. “You shouldn’t expect us to go in and say we will buy something for $15bn,” he added.