Germany’s Max Planck Society creates Nobel Prize winners. Most recently, in 2014, physicist Stefan Hell, one of its scholars, was recognised for a breakthrough in microscope technology, allowing much smaller structures — less than 200 nanometres — to be seen.

Commercialising this kind of highbrow abstract research, however, has been a different matter. While the alumni of California’s Stanford University have filled Silicon Valley with start-ups, Germany’s research institutes have not created clusters on the same scale.

A new tech hub — Cyber Valley — in southern Germany between Stuttgart and Tübingen, is attempting to create new kinds of collaboration between academics and businesses.

The hub will focus on AI and robotics, making better use of research talent, says Yasser Jadidi, global head of AI research at the Bosch Center for Artificial Intelligence.

“In Germany, you have quite a strong basis for young professionals and academics when it comes to machinery, but they are sort of hidden,” he says. The expertise exists, but it is not always exploited well.

“We want to establish a start-up culture,” he says. Mr Jadidi says Cyber Valley is an opportunity to put Germany on the map — and to change German business culture.

This is such an open field, nobody can foresee what AI will become

Sarah Bechtle, who has a masters degree in computational neuroscience — the mathematical modelling of processes in the brain — is among the first group of 30 students to have arrived in October to begin the three-year doctoral programme run by the Max Planck Institute.

She left a research job at Nasa in California to be here. A chief selling point, she says, was an emphasis on letting her research whatever she finds interesting. “It’s a PhD in robotics and machine learning, but as long as we have a good explanation for it, we are free,” she says.

This is part of the Max Planck Institute playbook that has helped produce 18 Nobel Prize winners since 1948. Scholars are given life-long grants to research whatever they choose. The 30 Cyber Valley PhD students have less time — just three years — but a similar degree of freedom.

Ms Bechtle says she is interested in studying the implications of AI for ethics and government policy. “If we don’t want to be scared by [artificial intelligence] then as a society we must think about it and go with the pace that society is allowing you to go,” she says.

There is no requirement for Ms Bechtle to work with the companies in Cyber Valley, but if she is interested in using data from autonomous cars, for example, she is able to work with Porsche or BMW.

Alexander Neitz, another just-landed PhD candidate, has a masters in computer science and previously worked with Ada Health, an AI start-up in Berlin that aims to be “the Alexa of healthcare”.

“There are many promising approaches for medical applications: better decision-making, better surgical robots,” he says. He is interested particularly in reinforcement learning, a subset of machine learning that focuses on getting a machine to act in sequence without active intervention.

Both students are sitting within a newly built, multistorey lab in Tübingen with an open-air set-up.

Glass-walled meeting rooms overlook the Swabian Alb mountain range, outdoor classrooms have beanbag chairs, and a variety of humanoid robots live in the basement. Just outside, where an autonomous lawnmower trims the grass, a series of cranes can be seen where new buildings are taking shape.

As Cyber Valley grows, it is likely to change the landscape in a place like Tübingen, a small university town, full of traditional architecture, whose famous scholars include the philosopher GWF Hegel.

Amazon has already pledged to create 100 research jobs at a new AI research centre. It has sponsored two professors and is making the Cyber Valley facility a research centre for Body Labs, a start-up it acquired in October that focuses on scanning human bodies and creating digital replicas of them.

Body Labs is using AI to help computers understand three-dimensional body movements for use in different industries. These could be used for video game avatars or helping people make fashion choices.

Students who express interest could join the effort, gaining access to the vast stores of company data. “You cannot do AI today without big data,” says Martin Stratmann, president of the Max Planck Society. “That is why academia teams up with industry.”

Cultural change is already happening — any visitor will hear it. “If you’re in the world of AI, you have to speak English,” says Tamara Almeyda, Cyber Valley co-ordinator. “Some of the German researchers here even have trouble speaking about AI in German. The research is exclusively in English.”

Mr Stratmann says the goal of Cyber Valley is to gather all kinds of smart people, from the academic and corporate worlds, and set the ideal conditions for them to thrive. “This is such an open field, nobody can foresee what AI really will become.” 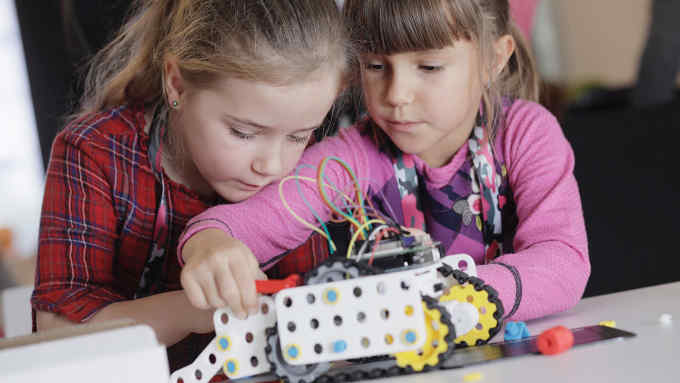