Cerberus Capital Management is expected to decide as early as this week whether to go ahead with a proposed investment in private equity group Abraaj’s funds platform, a person familiar with the matter said.

The US-based asset manager is in pole position to take an interest in the Dubai-based group after liquidators rejected Colony Capital’s bid to purchase some of Abraaj’s funds.

Cerberus, which in early June had been presented to creditors as a preferred bidder, is still deciding whether it is willing to incur the potential reputational damage from involvement with the Abraaj franchise.

“Today, I would say the probability is 60/40 that Cerberus do it,” the person said. Cerberus was unavailable for comment.

“The [Colony] sale was put together too hastily,” said one person with direct knowledge of the matter. “Given that Colony is more of a real estate investment firm, the fit with Cerberus would be much better.”

The Dubai-based investor has been in turmoil since investors alleged mismanagement at its $1bn healthcare fund.

Abraaj, which has denied any wrongdoing, last month applied for protection via provisional liquidation in the Cayman Islands to ward off threats from unsecured creditors after defaults in its $1.1bn debt pile.

Abraaj’s largest shareholder is Arif Naqvi, who founded the group in 2002, followed by the Investment Corporation of Dubai, the emirate’s sovereign fund, and Deutsche Bank respectively.

PwC has launched an investigation into Abraaj’s finances, which it has described as “highly irregular,” examining transactions, intercompany money flows and valuations.

Earlier this month, Colony withdrew a $248m bid for Abraaj stakes in six of its funds and their management rights, citing investor resistance. These investors, concerned that their stakes could be subject to similar mismanagement alleged in other funds, had called for a forensic audit.

The liquidators therefore tendered an emergency request for proposals from bidders who had already carried out due diligence on the group, receiving at least four offers by July 8, two of which it considered viable.

One of them, Colony’s revised bid, called for a forensic analysis of the funds, including inflows and valuations, with its financial offer hinging on the result of this review. 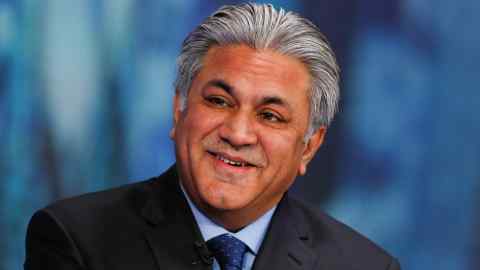 “Assume Colony are out but if everything falls apart maybe they can come back in,” one person familiar with its position said. Colony declined to comment.

The Cerberus proposal envisions it becoming an adviser to Abraaj’s funds, hiring some Abraaj staff and leasing office space. The US asset manager would pay $5m in cash and $20m to assume liabilities and provide new liquidity to meet costs, another person familiar with the proposal said.

This deal would see Cerberus assume management fees, potentially helping to stabilise the platform after months of turmoil. Abraaj’s $1.1bn in assets include $645m of limited-partnership stakes in its own funds.

Even while talks with Colony were taking place, Abraaj executives in New York discussed a potential sale of the Asian fund business to Cerberus, some of the people said.