In charts: bonds with negative yields around the world

Buying an investment that is guaranteed to lose money is hardly a recipe for financial success. But that is the bet that plenty of bond investors have placed.

Bonds worth $14.8tn — more than a fifth (21.6 per cent) of the debt issued by governments and companies around the world — are currently trading with negative yields (see chart below).

This means their prices are so high that buyers are guaranteed to get back less than they paid, via interest and the return of principal capital, if they hold the bond to maturity.

Government bonds with negative yields have been issued by Japan, most counties in the eurozone — even Greece which faced a multiyear debt crisis starting in 2009 — as well Poland, the Czech Republic, Bulgaria and Romania.

Japan, Germany and France account for more than half of the market in negative-yielding sovereign debt (see chart below).

Creditors are now paying these debtor countries to borrow money in an extraordinary reversal of normal practice.

Negative bond yields have arisen as a direct consequence of actions taken by central banks to support financial markets during and after the financial crisis that began in 2007. Central banks slashed interest rates to near zero and started multibillion-dollar asset purchase stimulus programmes that focused largely on buying bonds.

These policies have helped to spread negative interest rates deeper into fixed-income markets. A substantial proportion of corporate debt, including that rated as high yield or “junk”, also trades at negative yields even though there is a heightened risk of default by these issuers (see chart below).

The market turmoil that followed the outbreak of the coronavirus pandemic forced central banks to restart their asset purchase schemes last year and the market value of negative-yielding bonds has been climbing steadily since April 2020.

Over the past decade, the growing popularity of fixed-income exchange traded funds, which now control assets worth $1.3tn, has also provided a new pool of buyers for negative-yielding bonds. ETF managers have limited discretion over which bonds they buy, as third-party index providers are responsible for the rules determining which securities are eligible for inclusion in a passive tracker fund. 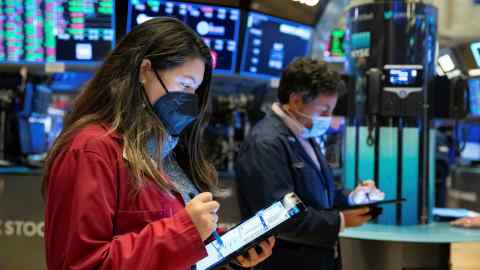 Ultra-low interest rates have encouraged some companies to increase share buyback programmes, as it is relatively cheap for them to issue debt and use the money raised to purchase their own shares. Share buybacks can boost a company’s earnings per share by reducing the number of shares in circulation. As a result, they can also boost the value of stock options and bonuses paid to top executives based on EPS performance targets.

Negative yields are fuelling the “carry trade” in currency markets, too. Investors in a country where yields are very low or negative, such as Japan, may buy bonds sold by a higher-yielding country, such as the US. But this strategy for improving returns also exposes them to currency fluctuations that could easily wipe out their returns. Analysts warn that the road away from negative bond yields could bring significant disruption.

An announcement in 2013 by the Federal Reserve that it planned to scale down its asset purchase programme resulted in a spike in US Treasury yields and a fall in equity prices — an episode known as the “taper tantrum”.

Investors are now braced for a possible repeat, with the Fed providing a clear indication this month that the decision to scale back the $120bn-a-month asset purchase programme would be announced at its next meeting in November.