Grant Thornton has been fined £3m for “misconduct” relating to its audits of Vimto-maker Nichols and the University of Salford, after a partner joined the companies’ audit committees despite being employed to provide consultancy work, creating “serious self-interest threats”.

The Financial Reporting Council said on Wednesday that it had issued Grant Thornton, the UK’s fifth-largest accounting firm by revenues, with a “severe reprimand” and an initial sanction of £4m, reduced to £3m following a settlement discount.

The company will pay an additional £165,000 to cover all of the FRC’s investigation costs, the FRC said, while the watchdog also imposed penalties on several former Grant Thornton staff.

According to the FRC, Eric Healey, then a senior partner at the firm, joined the audit committees of Nichols and the university — both Grant Thornton’s audit clients at the time — when he was also “engaged by the firm to provide services under a consultancy agreement”.

This created “serious familiarity and self-interest threats” and led to “the loss of independence” over eight audits, conducted between 2010 and 2013, the watchdog said.

The news comes as auditors increasingly face concerns that they are too close to clients — often a source of profitable consultancy work — throwing into question the objectivity of their audit work.

It follows a string of scandals related to conflicts of interest at large professional services firms. These include KPMG’s work for South Africa’s billionaire Gupta business family, which has been at the centre of a high-profile government corruption scandal, over a 15-year period. Meanwhile, PwC came under fire from the FRC recently for its work for collapsed retailer BHS, particularly after it emerged that the firm had earned eight times more from consulting work for BHS than it did from auditing. 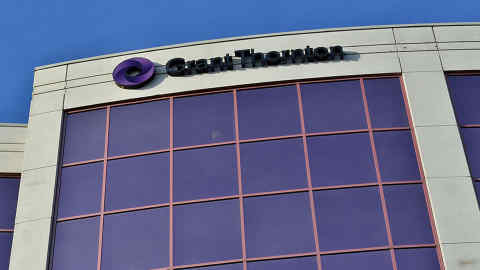 The FRC, which has itself come under pressure for being too “light touch” in its monitoring of accountancy firms, has urged an inquiry into whether the Big Four — Deloitte, EY, KPMG and PwC — should be broken up, with audits divisions spun off entirely.

The FRC said in its ruling on Wednesday that the case “revealed widespread and serious inadequacies in the control environment in Grant Thornton’s Manchester office over the period as well as firm-wide deficiencies in policies and procedures relating to retiring partners”.

Mr Healey was fined £200,000, discounted for settlement to £150,000, and will be excluded from the Institute of Chartered Accountants for a recommended period of five years, the FRC said.

“Whilst the focus of the investigation was not on our technical competence in carrying out either of these audit assignments, the matter of ethical conduct and independence is equally of critical importance in ensuring the quality of our work and it is regrettable that we fell short of the standards expected of us on this occasion,” Grant Thornton UK said on Wednesday.

“As we have since made significant investments in our people and processes and remain committed to continuous improvement in this regard, we are confident that such a situation should not arise in the future,” it added.