Start a 4-week trial
How To Spend It  Jewellery

Made to last, handed down through generations and routinely remodelled and repurposed – the jewel is perhaps the original recyclable luxury. From 19th-century Roman “archaeological revival” designs set with coins, cameos or intaglios to Cartier’s spectacular 1920s Egyptomania jewels centred on faience scarabs and amulets, history has long cast its spell. But with recycling and reusing high on today’s social and cultural agenda, it’s hardly surprising that contemporary designers are incorporating more antique or ancient elements into their creations.

At the helm of German art-jeweller Hemmerle, Christian Hemmerle and his wife Yasmin scour the world for historic elements to amplify the unmistakable graphic modernity initiated by Christian’s father, Stefan, in the 1990s. They re-fashion elements as varied as Roman micro-mosaics and Chinese ceramic coins, and set 18th- and 19th-century portrait cameos into earrings or tassel pendants. Their Revived Treasures project, meanwhile, features ancient faience fragments (also called Egyptian paste, the oldest-known glazed ceramic) in the form of lotus flowers, scarabs and fly amulets that refer to Yasmin’s Egyptian roots. “I love giving historic artefacts a new life, a new home,” Christian says. “It’s about seeing beauty in things that others don’t see.”

Glenn Spiro incorporates Bactrian (central Asian) mineral remnants from the 3rd and 2nd millennium BC into his pieces, such as a lapis fragment in the shape of a bull’s head set into a diamond and sapphire ring. He also remodels ancient jewels; particularly eyecatching is a Mesopotamian carnelian necklace from the 1st millennium BC interspersed with Burma rubies.

Greek and Roman coins, petrified wood carvings, stone amulets and little medieval bronzes have always been a feature of Elizabeth Gage’s work. “I see jewellery as a way to make history wearable,” says Gage, who revives these artefacts in rich gold settings. For instance, a carved stone gazelle amulet from 3,000 BC sits above a gold impression of a running gazelle taken from a Sassanian seal, and a triangular tourmaline.

Krishna Choudhary of Santi Jewels, meanwhile, offers a collection inspired by his Indian heritage and conjured around antique gems and early Golconda diamonds. Choudhary has access to these treasures through his father and the family’s Jaipur business, Royal Gems and Arts, which reaches back 10 generations. In his Mayfair salon, Choudhary shows me a ring centred on an antique “portrait”-cut diamond, framed by 17th-century Mughal carved Colombian emeralds.

Each of Paris jeweller Marc Auclert’s jewels is based on the Renaissance tradition of objets montés, which showcased engraved gems or treasures from classical antiquity on contemporary pieces. His intimate gallery close to Place Vendôme feels rather like a cabinet de curiosités, stuffed with treasures spanning cultures and civilisations. He mounts these fragments of the past very simply in gold, making them feel modern while preserving their integrity. In his signet-style Profile rings, a 3rd-century BC silver drachma is set under a brushed gold disc, its centre cut out to reveal the profile head, so the coin remains intact.

Classicism of another era inspires New York-based mother-and-daughter design duo Toni and Chloë Goutal to repurpose Victorian and Edwardian star and crescent-moon brooches as pendants. It began on a trip to London in 2015, when Chloë bought a late-Victorian diamond crescent brooch and hung it on a chain from the same era: “I was stopped everywhere and asked about my pendant, so I called my mum and explained my idea for the brand.” They returned to Europe to collect as many of the gem-set celestial brooches as possible, as well as antique chains, and launched their collection that year. The appeal, Goutal explains, lies in the romance and provenance of the brooch-pendants, and their versatility for night or day, ballgown or jeans.

Eco-jeweller Pippa Small’s Old is New collection gives fresh life to antiquities, from an Islamic filigree pendant to an Etruscan gold dolphin ring – all sourced from dealer Joseph Coplin of New York’s Antiquarium Ltd. Coplin had collected a number of these artefacts over the years, not knowing what to do with them. Small had the answer: set them in gold mounts, honouring their age while presenting them in a modern context.

Eliane Fattal works closely with antique jewellery dealers SJ Phillips to reimagine 18th- and 19th-century jewellery. A photographer, artist and art historian, Fattal bought her own engagement ring at the dealers and was struck by the panoply of interesting antique and 20th-century jewels on offer. “At the time, the choice was between jewels you had to keep in a safe and costume jewellery.” She bought a Victorian pansy brooch from SJ Phillips, redesigned it and then took it back to them, suggesting they did more. “They said, ‘Let’s do it together’,” she recalls, and in 2011 she launched a collection with much success. Now she is solely in charge of the business but only buys her original jewels from her former collaborators, and makes just 30 pieces a year. “Antique jewellery is so beautifully made and individual and can’t be copied.” 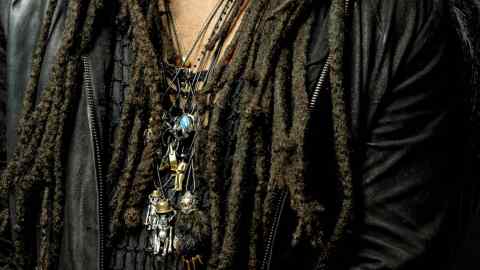 Recently, Fattal has worked with Sotheby’s Diamonds on a collection mixing old jewels with new diamonds: “The idea was that you can click on your rock and jazz it up.” One of the most distinctive features of her brand is the velvet-lined, book-shaped box in which each creation is presented, along with historical details and symbolism of the original jewel. “I love things that tell a story,” she says, “and the book marks a new chapter in the life of a piece of history.”