Connections count when it comes to start-ups

Erik Abrahamsson grew up in rural southern Sweden and worked for tech start-ups in Singapore before returning to full-time study on an MBA programme. He does not think he could have found a better location than Oxford, where he completed his masters degree, to launch his own venture, a data analytics business for the insurance sector called Digital Fineprint.

“To start a successful company you need to be close to knowledgeable people and Oxford has some of the greatest talent in the world,” Mr Abrahamsson says.

Incubating new companies at universities from ideas hatched by students is still best done in the US. All but one of the 10 top MBA programmes, in terms of the number of new entrepreneurs they produce, are found in the US, according to Pitchbook, the private equity research company.

European universities are starting to gain a presence, however, with Insead, a school started in Fontainebleau in France, sixth on Pitchbook’s list, London Business School at number 12 and Oxford in 20th place.

Proximity to a world-renowned seat of learning is a key part of any successful start-up ecosystem, according to Joelle Sostheim, an analyst at Pitchbook. “Innovation tends to develop within clusters, which makes the knowledge and talent found in universities an important source of both ideas and employees,” he says.

Oxford has been catching up with its American peers in recent years, albeit from a much lower base. Last year its entrepreneurial support subsidiary, Oxford University Innovation (OUI), backed 21 spinouts, up from five in 2015.

One of its most notable UK spinout successes in recent years was Oxford Nanopore Technologies, whose founder featured in the FT’s top 10 Bame leaders and which makes high-performance DNA-sequencing systems. The company raised £50m in 2018, giving it a valuation of £1.7bn.

A game changer for the university has been the Oxford Sciences Innovation fund, which raised £580m at the end of 2016, making it the largest private university fund in the UK.

The UK also has a lot of talent, thanks both to its world-class universities and its relative openness (so far) to students and academics from overseas. For instance, five of the world’s top 10 medical research universities are British, according to Times Higher Education, and Oxford university has been number one for the past five years.

Efforts have been made to connect this talent with students through physical spaces, such as the Oxford Foundry, an incubator run by the university’s Saïd Business School but available to any of the university’s students.

“In the US, you have the advantage of scale in terms of capital,” says Adam Stoten, OUI’s chief operating officer. “Because we don’t have this rich ecosystem of investors we have to do more to nurture these start-ups with mentors.”

Last summer, OUI and the Foundry ran a pilot programme, making a pool of university-generated intellectual property available to student teams to work up into new ventures, which encouraged them to go back to their colleges to seek support from their alumni networks, according to Mr Stoten.

Providing office space for new ventures is a challenge in picturesque Oxford, which is full of historically-significant buildings protected by planning rules Mr Stoten admits.

In June the university opened the Oxford BioEscalator, an incubator for medical science companies located on the university’s medical research campus. This took four years to get planning approval and be built, a lifetime in start-up years, Mr Stoten notes.“Things are happening, but they take a long time,” he says.

Another city that has benefited from the support of university spinout teams is Barcelona, which boasts two business schools, Esade and Iese, both among the top 25 MBA providers in the world, according to the FT’s annual ranking.

The central walkway of Esade’s campus is home to the school’s Entrepreneurship Institute, a series of rooms specifically designed for students who want to develop start-up ideas, including co-working space and a fabrication laboratory equipped with 3D printers and other high-tech tools to build new products.

The idea is to bring together not just MBA students but also those taking engineering and law degrees, who can form start-up teams, according to Davide Rovera, a manager of the institute. “We want to mix it up,” he says. “Business talent needs tech talent and we facilitate those connections.”

One of the beneficiaries of Esade’s support is Frederic Llordachs. He had completed a degree in medicine and surgery but his career goals were frustrated after he broke his arm badly. That prevented him from working for a year, so he decided to study for an MBA.

In 2007, he co-founded Doctoralia, an online platform for booking doctor appointments. Now called the Docplanner Group, it is used by 30m patients in almost 20 countries.

“The environment here is not just to start new projects but to meet people,” he says. 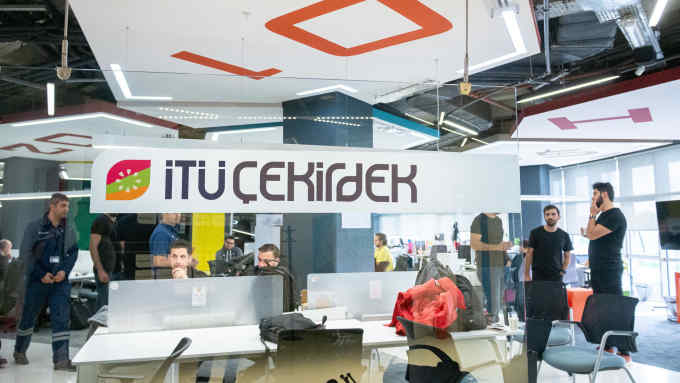