Vodafone revenue falls on weakness in Italy and Spain

Vodafone’s Vittorio Colao on Wednesday delivered the last set of results of his transformational decade as chief executive, with revenue falling almost 5 per cent in the first quarter against the same period a year ago.

The numbers were weighed down by foreign exchange movements and weakness in Italy and Spain but Vodafone reiterated its full-year outlook of earnings growth of between 1 per cent and 5 per cent.

The group’s overall performance “provides us with the confidence to reiterate our outlook for the year", Mr Colao said.

Mr Colao, who took over Europe’s largest mobile phone company by subscribers at a time of internal management turmoil in 2008, will formally hand over to Nick Read, his chief financial officer, in October, with the company’s annual meeting on Friday his public swansong.

His transformation of the company into what he calls a “European champion” involved asset disposals in France, China and the US as well as tidying up holdings in Africa and merging with rivals in India, the Netherlands and Australia.

Vodafone warned of weakness in the first quarter earlier this year. The latest results were also the first time the company has adopted the IFRS 15 accounting standard, which has altered the way it books revenue from handset sales in the UK market.

Vodafone shares were down 1.81 per cent at 174.44p in midday trading, compared with about 238p at the start of the year.

Revenue for the three months was €10.9bn, which Vodafone said represented organic growth of 1.1 per cent under the new accounting standard.

European revenue dropped 1.3 per cent, while that of emerging markets rose 7 per cent. Indian revenue fell 22 per cent ahead of the merger of Vodafone’s local unit with rival Idea Cellular, which Mr Colao said would be completed no later than August 31.

Revenue in Italy dropped 6.7 per cent as low-cost rival Iliad entered the market. Iliad has added 1m subscribers in 50 days, the second most successful network launch in European telecoms history.

Stephane Beyazian, an analyst with Raymond James, said the impact on Vodafone had been worse than expected with service revenue down almost 10 per cent in Italy compared with 0.9 per cent for Telecom Italia. 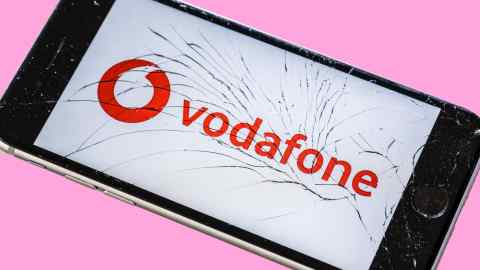 Spain, where lower-cost competitor MásMóvil has performed strongly, was also weaker for Vodafone, with revenue dropping 1.7 per cent.

Mr Read said he expected the company’s performance in Spain and Italy to continue to deteriorate in the second quarter.

Mr Colao is signing off after sealing the acquisition of Liberty Global’s German and eastern European cable networks for €18bn, subject to regulatory approval.

That deal was Vodafone’s biggest push into broadband. The company added 128,000 fixed customers in the first quarter, a slower rate than in previous quarters.

The turnround of the company’s domestic UK business continued, with revenue growth of 0.3 per cent in the first quarter.