The PowerPoint presentation in which 13 young Goldman Sachs analysts complained that they were overworked and disrespected has divided opinion sharply.

“Snowflakes,” scoffed one bank executive, remembering that he too worked 95 hours a week when deal flow was high. So what if 92 per cent of them felt “ignored” in meetings: “They’re 22 years old and have been working less than a year. What can they add?” Jim Cramer of CNBC was equally snarky: “if they can't live on four hours [sleep] they should be miserable,” he tweeted.

But others called the long hours a “form of hazing” and argued that Wall Street culture must change to diversify workforces and compete for top talent.

Goldman Sachs’ chief executive David Solomon tried to split the difference in a tape-recorded message to staff over the weekend. “We want a workplace where people can share concerns freely,” he said, promising stricter enforcement of an existing ban on requiring junior bankers to work on Saturdays. But he asked staff to continue to “go the extra mile for our client, even when we feel that we’re reaching our limit”.

The divisions underscore three things. Despite reform efforts after a Bank of America intern died of an epileptic seizure in 2013, investment banking remains something of a high-paid sweat shop. Millennial and Gen Z workers are more willing to challenge their bosses than their predecessors. And the Covid-19 pandemic has made the ensuing conflict much worse.

Financial and professional services firms are on a tear in areas connected to equity capital markets: initial public offerings, mergers and acquisitions and private equity. Complaints are rising about burnout and overwork, although few match the 11-page Goldman slide deck for detail. At the Wallstreetoasis website, one person wrote: “At UBS, it’s the same here. Want to die”. Junior employees at the private equity firm Apollo griped they were “paid to grind”. And an associate at the US law firm Latham & Watkins told the Financial Times that work “has pervaded every waking (and sometimes sleeping) moment”.

The outpouring comes as most workplaces are already struggling with clashes between senior managers and millennial and Gen Z workers who refuse to sit quietly in their allotted places. “There is less tolerance for abuse and more of a sense that when you experience abuse you should speak up,” says one senior Goldmanite who expresses a sneaking sympathy.

Covid has only roiled this toxic stew. With most white-collar professionals still working from home, the lines between work and home are further blurred. Remote work also removes the social benefits of long hours: camaraderie, contact with senior bankers, even bragging rights. Instead of sharing late-night takeaway with work buddies, many analysts are living at home and fending off concerns from protective parents.

Remote work has been a disaster for banks and other businesses that rely on an apprenticeship model. Many of the youngest workers, including the complaining Goldman analysts, have never met their bosses in person. Juniors feel less connected to the institution, and seniors find it hard to judge when underlings are struggling.

That’s one reason why many senior bankers, Solomon included, are pushing to get people back to the office. And there is a mad dash on at Goldman, UBS and elsewhere to hire more junior bankers to help share the load.

As they scramble, the big banks should take a look at the way Jefferies has responded to the pandemic. The midsized investment bank reported record net revenues last year and business continues to boom. But the group, which lost its chief financial officer to Covid complications in March 2020, was quicker than most to focus on wellness and overwork issues.

The bank recruited a small extra group of analysts who started in January to help reduce the workload; its 2021 analyst class will also be some 40 per cent larger. Last week, the company emailed all 1,124 analysts and associates to give them the choice of a Peloton, Mirror or Apple Watch fitness package as “a sign of our deep appreciation”.

Admittedly, it is easier for Jefferies to make quick changes: its entire workforce is about half the size of Goldman’s cadre of analysts. But Jefferies HR chief Cary Friedman is clear that he wants the benefits to last. While its $3m fitness initiative is evidence the company cares, “our ultimate goal is focused on making sure through our various efforts . . . they have time to use it”, he says.

That would be money well spent. 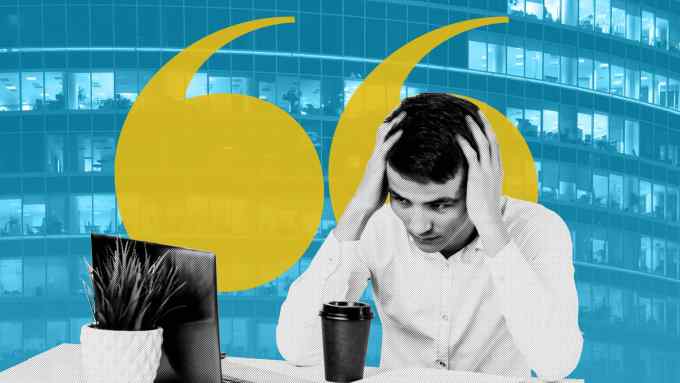