Ten years after their first collaboration, the fashion house is doing the polka again. And this time it’s everywhere

Nicolas Ghesquière, the artistic director of womenswear at Louis Vuitton, presented his cruise 2023 collection under the twilight Californian skies at the Louis Kahn-designed Salk Institute in San Diego. The collection was a powerful posit for a futuristic wardrobe, Star Wars royalty meets desert raver – save for a handful of monogram handbags blanketed in multicoloured spots that looked strikingly familiar.

This flash of polka was the unmistakable handiwork of the nonagenarian Japanese artist Yayoi Kusama – the teaser of a new collaboration, Crafting Infinity, that will arrive in stores next month. It’s a follow-up to the blockbuster collection the artist produced with the French house a decade ago, but this time more comprehensive: Kusama’s eye-catching motifs will grace all categories including, for the first time, fragrances and menswear.

For Kusama, it’s another chapter in her long relationship with fashion. In New York in the ’60s and ’70s, she staged happenings and fashion events as political protests for which she designed her own textile line and clothing, which was then sold in boutiques. “In any mode of expression, it is a question of what message is conveyed and, in that sense, fashion is the same as performance and happening,” writes the artist from her home in the Seiwa Hospital in Tokyo, where she has been a resident since 1977 because of her fragile mental health (although she still goes to her studio six days a week). Now 93, the artist who dresses head to toe in her prints and sports a bright red bob-cut wig has become a symbol in her own right – an artist with as keen an instinct for personal image as Andy Warhol, with whom she was once good friends.

“Kusama is an icon, a major artist in her field and a very important female artist,” says Delphine Arnault, Louis Vuitton’s executive vice-president, who steered this latest project. “We decided it would be amazing to work with her again because she brings a feeling of dream and happiness, and her world is also very immersive and sensorial.”

She brings a feeling of happiness. Her world is immersive

Kusama, a pioneer of the medium of art installation in ’60s New York, has always wanted to blanket the world in polka dots. Throughout her career, she has experimented with the propagation of the motif. “It is my philosophy that polka dots are one living organism, and that the moon, the sun, myself, and you are all one of the polka dots, representing infinite proliferation,” she says. This repetitive effect of her chosen subject – dots, phalluses, mirrored balls or even LED lights – is a visual expression of the angst-induced phantasmagoria Kusama has experienced since her traumatic childhood. The obsessive output is an attempt to “sublimate” herself and her experience through art, which has always been a therapeutic compulsion.

Kusama’s original 2012 collaboration was instigated by Marc Jacobs, Louis Vuitton’s former artistic director and a renowned art collector, and timed to coincide with the artist’s first global retrospective. It has been one of many Louis Vuitton artistic collaborations in a series that kicked off with Stephen Sprouse in 2000 and has since included collections by Takashi Murakami, Richard Prince, Cindy Sherman and Jeff Koons.

Jacobs was prescient in understanding that a brand is even stronger when employed as a canvas. Customers demand novelty, outsiders bring freshness and there is always the added-value appeal to collectors: on 1stdibs, you can find an original Yayoi Kusama dot Speedy bag for around £4,000, nearly double the price of new styles.

The menswear in Creating Infinity is characteristically sportswear-influenced with oversized jackets and jeans, but tempered by sharply tailored jackets and coats. The women’s ready-to-wear is a line-up of mod silhouettes including short and flirty skirts, A-line leather dresses and bomber jackets, as well as foulards. There is also a wide array of shoes, accessories, fashion jewellery and bags, including the Dauphine and Petite Malle seen in the cruise show. 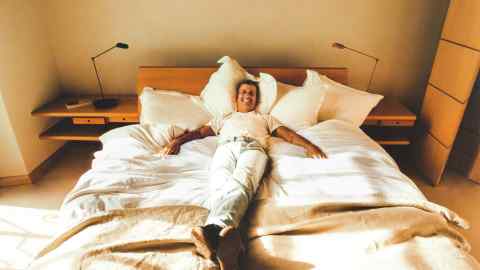 Close up, too, there is a deeper exploration of handicraft. The multicoloured dots are a reproduction of the artist’s brushstrokes and her irregular yet precise placement. “We thought it would be powerful, and also very challenging, for our teams to reproduce this on a larger scale,” says Arnault. The technique is a multi-step silk-screen print, whereby the original artwork is applied with an intricate serigraphy print, with each colour applied individually and in several layers to obtain a certain thickness of ink on the base. The final step is an embossing process that creates the relief on each dot. Other high-tech craft techniques, such as leather marquetry and embroidery, were also employed. “I am very satisfied, as before – or even more so,” says Kusama.

In terms of visual media, it’s a step further even for Kusama. This new iteration is given a tech 2.0 treatment with anamorphic billboards, AR experiences and a gaming app. “Never has Louis Vuitton committed so totally to the vision of artistic talent as in this project,” says Arnault. In museums around the world, visitors queue for hours to experience one of Kusama’s Infinity Mirror Rooms just for fleeting boasting rights. Vuitton’s stores should be next.