Accept & continue
Manage cookies
Grow yourself happy: the gardener’s guide to wellbeing
See all 11 stories
How To Spend It Gardens

How to grow a mood-boosting garden

When London’s Chelsea Physic Garden was established by the Worshipful Society of Apothecaries in 1673 within a walled, four-acre plot close to the River Thames, the healing power of plants was not just acknowledged, it was an intrinsic part of life. Botany was closely aligned to medicine, and gardens were viewed as restorative and contemplative spaces. It’s an idea that was shared by the Ancient Greeks, yet over the past half century, in intense urban environments, we’ve become increasingly divorced from nature – while the number of people with mental health issues has soared. In 2019, one in four people in the UK (and 792 million people worldwide) experienced problems according to Mental Health First Aid England (MHFA).

Cities are associated with higher rates of most mental health issues compared to rural areas – with a nearly 40 per cent greater risk of depression, more than 20 per cent more anxiety and double the risk of schizophrenia, in addition to loneliness, isolation and stress. All are conditions that have been magnified and exacerbated significantly by the current pandemic, and it’s against this backdrop that the restorative powers of green spaces have become a huge factor in our society’s recovery.

Isabel Bannerman – who along with her husband, Julian, has created atmospheric gardens for the Prince of Wales at Highgrove, Lord Cholmondeley’s Houghton Hall and at their former homes Hanham Court and Trematon Castle – is a passionate flag-bearer for good-for-you gardening. “Plants are a really good steadier. You can’t let them die, you have to keep going. Like having children, but less demanding,” she says. But as she also notes, gardens are very forgiving. “There’s always another year, another season to look forward to, to try again. There is so much beauty, such sensory pleasure, all of which feeds the soul and the psyche.”

For Bannerman, scent is key to creating gardens that transport and revive – a subject she explores in her book Scent Magic: Notes from a Gardener. Natural chemical “uppers”, including indole, are present in the fragrance of lilac and jasmine, while the calming qualities of lavender are connected to linalool. Bannerman uses their powers to envelop the home. “I’ve planted pelargoniums [tender geraniums] and night-scented stock near windows or in window boxes,” she says. “And the smell of Sarcococca gives one a big hug of spicy warmth on a winter’s day.”

Getting to work in the garden can also force us to slow down and take stock. “People go in prepared for this – they know they need to nurture a plot with time and patience,” says garden designer Jo Thompson, whose landscapes – a mix of textural layering and subtle, feminine colour palettes – have a soothing quality. For Thompson, one of the central elements of a calming outdoor space is the provision of an enclosed garden (the hortus conclusus). “It’s really important to have a place to sit or even a retreat,” she says. “These areas are magical and inspiring. You’re in nature, there’s movement and life but you feel safe.”

Pleached trees (which are trained to grow as “hedges on stilts”) are invaluable in creating these subtle enclosures. Thompson suggests using them to create a “cloister” at the far end of a long city garden or staggering at intervals to form a background to a softer, airy layer of trees. The trick, she says, is “gentle intervention rather than a heavy stamp of design.”

Landscape gardener Marcus Barnett has done exactly that in a private residence in Wiltshire where he has created a walled garden, enclosing a sunken seating area and a water rill, overarched by multi-stemmed trees. In Yetholme, Australia, plantswoman Sarah Ryan has worked the idea into her zoned Hillandale garden, which has two distinct areas: one open to the full sun allowing perennials to bloom, the other shaded by tall trees, where ferns surround a water rill that runs to a small lake.

This same idea frequently appears in the work of designer Matt Keightley, co-author (along with the Royal Horticultural Society’s Professor Alistair Griffiths) of the RHS book Your Wellbeing Garden: How to Make Your Garden Good for You. He suggests that as well as creating areas of privacy, hedges can also help to combat pollution and filter noise. Plants naturally absorb carbon dioxide, while layering trees and shrubs can create an effective sound-barrier – evergreens such as Photinia, Portuguese laurel, holly and Italian cypress are some of the best sound-absorbers. All of which can make a garden – especially one in a busy city – a more pleasant and beneficial space to be in.

Keightley also advises growing plants with medicinal qualities that can be used directly in teas and infusions: from chamomile (to induce sleep) and lemon balm (which can relieve anxiety or stress) to peppermint (which aids digestion). RHS Rosemoor, a display garden in North Devon is worth visiting for design inspiration – amid the fruit and vegetable plots and its scented rose garden, discrete sheltered spaces (including a thatched gazebo) offer peaceful pitstops among the planting.

While we may not all self-medicate with ancient plant remedies, we can all benefit from the myriad and complex ways gardens can help us. Sunlight lowers blood pressure and boosts vitamin D levels, and green spaces can help alleviate stress, anxiety and depression. And if you’re the one doing the gardening, it can be a great workout. This, of course, is hardly news – we intuitively know that being outside is good for us. But science also backs this up. American journalist and author Florence Williams has gathered and simplified the research in her book The Nature Fix, which reveals that we are hard-wired to be in the natural world. “Our brains become relaxed because these are things that we are designed to look at, hear and smell,” she says. “The frontal lobe – the part of our brain that’s hyper-engaged in modern life – deactivates a little when you’re outside, while alpha waves, which indicate a calm but alert state, grow stronger.”

And evidence is mounting that even looking at images of gardens is beneficial; Korean researchers have found that pictures of landscapes stimulate brain function in the anterior cingulate and the insula – areas associated with empathy and altruism – which could explain the euphoric feelings of viewing cultish gardens such as the jewel-box perfection of La Louve in the Luberon, France, created by former Hermès designer Nicole de Vésian in the last decade of her life.

The Japanese have long been aware of these effects on mind and body. The practice of shinrin yoku, or forest bathing, asserts that being in nature using all of one’s senses could reduce blood pressure, lower cortisol levels (the stress hormone) and improve concentration and creativity. Meanwhile, phytoncides (the organic compounds released by trees such as cedar, oak and pine, known as the “aroma of the forest”) were found to significantly boost immunity, while helping us relax. So compelling is this evidence that last year the UK’s Woodland Trust suggested that forest bathing should be prescribed by GPs.

Indeed, there is perhaps no greater illustration of the power of nature to lift the human spirit than the increasing number of therapeutic gardens at hospitals, specialist units and hospices around the country. Horatio’s Garden charity creates and nurtures sanctuaries in NHS spinal-injury centres to improve the mental health of patients who spend months in hospital.

At Maggie’s Centres, which provide practical and emotional support to people living with cancer, gardens are central to the overall aesthetic. It commissions world-class landscapers – among them Dan Pearson, Jinny Blom and Piet Oudolf – in tandem with architects. “Every time people come into a centre, the garden is slightly different – it creates a different light and a different experience that isn’t obvious because it’s emotional,” says Laura Lee, the charity’s chief executive. “It does something to the heart and soul and the spirit. These are ephemeral words but we know that the garden stirs something.”

Last year, the charity opened one of its largest centres to date at the Royal Marsden Sutton in Surrey, where architect Ab Rogers’ building is encircled by Dutchman Piet Oudolf’s landscaping. “As a plantsman, Oudolf is just extraordinary, but he needs some space to make that impact,” says Lee of his naturalistic “four seasons” aesthetic in which plants are chosen for their form, texture and long season of interest. A snaking pathway under mature trees will be flanked by a woodland garden of hardy ferns, and in sunnier areas large swathes of airy grasses, including shimmering Sesleria autumnalis and Molinia caerulea “Transparent”, will provide structure alongside Oudolf’s favourite prairie plants like Sporobolus heterolepis (prairie dropseed) and the drooping melancholic heads of Echinacea pallida (pale purple coneflower). All of which – planted in his signature style with vast drifts, curvaceous beds and meandering paths – feeds into our subconscious preference for the most naturalistic of landscapes.

The work of pioneers such as Oudolf has led to a more fluid design approach. “The minimalist landscape, where you are told to sit on that bench, walk in a straight line or admire a certain artfully placed object is an almost immoral construct,” says landscape architect Tom Stuart-Smith. “As the urban environment gets more oppressive and more structured, there is an increasing need for spaces where people can form their own stories.”

For Stuart-Smith (whose wife, Sue, is a psychotherapist and author of The Well Gardened Mind: Rediscovering Nature in the Modern World, a book based on insights from community, prison and therapeutic gardens), it’s increasingly about giving people choices – even in restricted urban environments. “Instead of predictable routes, you try to create a tableau of possibilities,” he says. This means meandering paths and a garden that slowly reveals itself – in other words a landscape of surprises. For a masterclass in this style of design, look to the designer’s exotic gardens at Le Jardin Secret in Marrakech, which unfold through incredible vistas and views with highly textural planting.

Arguably the most fundamental element in an uplifting garden – which all these ideas feed into – is an immersive atmosphere. The design behind his latest project, Horatio’s Garden at the Royal National Orthopaedic Hospital in London, which opens at the end of this month, enables patients and NHS staff alike to get away from clinical wards into a natural, life-affirming environment. This will be a flagship project for the mental-wellbeing benefits of all gardens in NHS hospitals.

Anyone who follows Stuart-Smith’s personal account on Instagram will be familiar with the videos of his walks at home (often led by his terrier, Rabbit) around his prairie garden, which was devised with academic and landscape architect James Hitchmough in 2011. In the low golden light of a midsummer evening, it’s heart-stoppingly beautiful. The designer would say that this isn’t necessarily his doing – it’s the alchemy of nature – but nonetheless someone has to throw all the ingredients into the mix to create those moments.

“I think of gardens in terms of mood, and the accumulation of hundreds and hundreds of little experiences,” he concludes. “I want to create a space where you brush past something that makes you aware it has a life of its own, and that elevates you. For me, that is almost the holy grail.” 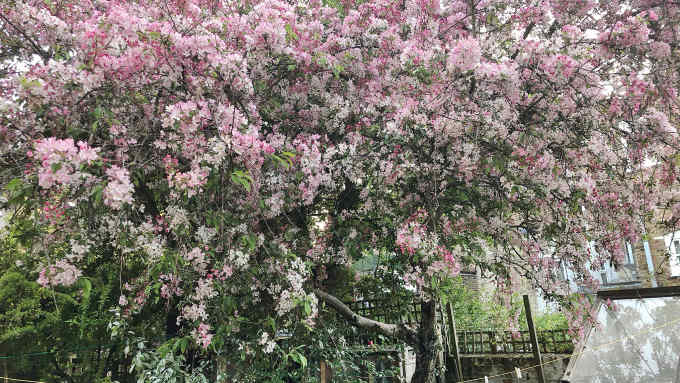