The space where punk and plant collide

Backstage, beneath the frescoed ceilings of Hôtel Potocki in Paris’ 8ème, a model requires several helpers to offload a towering headpiece, sculpted from black synthetic hair and the fronds of a silvery-grey air plant. Her outfit is equally unwieldy: a cocoon of iridescent crimson furls and tutu layers, constructed from hundreds of components joined together in a press-studded matrix only visible from the inside.

Kei Ninomiya, the designer behind Japanese label Noir, and botanical artist Makoto Azuma have been up since 3am finessing these uniquely visceral works that blur the boundaries of nature, sculpture and fashion. They’re showing Noir’s autumn/winter collection: dresses constructed from masses of glossy plastic leaves; shimmering tartan fabric pleated into giant bunches; crinoline skirts covered with hair braids; and multiple gold fibre loops sprouting from outfits to kinetic effect. Azuma has contributed the headpieces, each one bursting with bird-of-paradise flowers, spiky aechmea leaves and frothy asparagus plumosus sprayed crimson red. On this occasion, artist Hrafnhildur Arnardóttir – aka Shoplifter, a specialist in hair sculptures who represented Iceland at the Venice Biennale in 2019 – has joined the team to make the wigs on site.

“With this collection I wanted to explore the colour red through to its deep, blackish tones,” says 36-year-old Ninomiya, who grew up in the southern Japanese city of Oita and trained at the Antwerp Academy of Fashion, before being taken on by Rei Kawakubo as a pattern cutter at Comme des Garçons. It was under the umbrella of the Tokyo label that, in 2012, he launched Noir, pairing his concept-driven twice-yearly collections with a commercial line of ruffled T-shirts, diaphanous skirts and leather jackets that sell at Dover Street Market and on Net-a-Porter. “I always look to create powerful and beautiful collections,” he says. “The pieces are often big in size and volume. You could say there’s a link with the power of nature.”

It’s also a link to Azuma and his wildly imaginative floristry. The pair met 15 years ago, when Ninomiya paid a visit to Azuma’s Tokyo shop-studio Jardins des Fleurs, a lab-like space located in a basement in Aoyama. Friends ever since, they struck up a creative partnership for Ninomiya’s Paris runway show in 2018. “I had long admired Azuma’s work, and while preparing for the show it simply crossed my mind to ask him,” says Ninomiya. The resulting all-black collection was offset with Azuma’s biomorphic “masks”, created with floristry mesh and a lattice of leaves and flowers.

In turn, Azuma was struck by Ninomiya’s originality. “He knows everything about how to sculpt shapes through geometry – with webs, rivets and knotting. His aesthetics are both scientific and artisanal.” The same could be said of Azuma’s creations, and the duo’s aesthetic similarities are palpable. Both are fascinated with natural geometry and fractal forms. Both strike a punkish note. When we meet, both are clad in a uniform of charcoal jeans, sneakers and Noir’s signature black leather biker jackets – Ninomiya with his trademark mohawk, Azuma with a bleach-blond crop. They share a passion for ’70s punk, says Azuma, a one-time aspiring rock musician who discovered his métier while working in Tokyo’s wholesale flower market in his early 20s.

Today, Azuma and his small team are the Tokyo rock stars of floristry. In Japan, ikebana is highly revered, but what Azuma brings is scale, a subversive perspective and an encyclopedic knowledge. “All my creativity originates from the natural world,” he says. “I’ll take a plant or flower – already beautiful enough – and with it create a new kind of beauty. If I remove a flower from nature, as an artist, I have a responsibility to respect its life, otherwise the arrangement will not succeed.”

An extreme example of Azuma’s oeuvre can be seen in his project titled In Bloom, for which he sent living plant installations into alien contexts – the desert, the ocean, a glacier and space. Each botanical expedition was documented by fine-art photographer Shunsuke Shiinoki. His work has also been used by other fashion brands. He has dreamed up installations and window displays for Fendi and Hermès, and decorated the Dries Van Noten spring/summer 2017 runway with florid frozen arrangements – swathes of orchid, passion flower, African violet, iris and gerbera, reminiscent of Dutch Master paintings and all arranged in giant blocks of ice.

Fashion’s ephemerality marries well with the temporality of flowers

For the Noir shows, Ninomiya does not brief Azuma in words or with moodboards. “We have a connection and a mutual respect,” says Ninomiya. “On arrival in Paris, we chat about so many things and I show him the collection. Azuma then heads to the flower market.” For spring/summer 2020, Azuma collected 30 types of green plant, including Boston ferns and moss, which he crafted into curvilinear caps and sprays. Topping vast, white cloud-like dresses, the vision was of a new half-woman, half-plant species. For autumn/winter 2019, varieties of long-stemmed red roses enhanced the dark romance of ruffled black gowns.

“Creating for the runway is the biggest challenge, as the pieces have to work as part of Noir’s vision and they are in motion. But the ephemeral nature of fashion shows marries so well with the temporality of flowers,” says Azuma. “I believe the relationship between humans and plants will become even closer from now on. Plants are not only for us to eat; visual appreciation is important too. How humans integrate plants into society in a contemporary way is vital.” This ecosystem is bound to be further explored with Noir’s spring/summer 2021 collection, which Ninomiya is expected to show in Paris later this month. Once again, Azuma will play a crucial role in the mise-en-scène – a fashion mash-up of punk and plants for our times.

After this story went to press, Noir announced that it will not be showing in Paris this season.

Dior and Stephen Jones
“Without hats there is no civilisation,” wrote Christian Dior in 1954. It’s a good job, then, that the head of the house’s millinery workroom is a leading hatmaker. Dior’s partnership with Stephen Jones began in 1996, since when he has conjured some of fashion’s most radical headwear, from the gelatined silk-chiffon “wave” of spring 2009 to the garlands for Maria Grazia Chiuri’s first haute couture collection in 2017. This season, Jones took Chiuri’s theme of punky bohemia to create structured leather baker-boy caps and printed silk headscarves – a nod to her teenage wardrobe.

Givenchy and Noel Stewart
For her final outing as artistic director at Givenchy, Clare Waight Keller paired her asymmetric opening look with a wide-brimmed hat – so wide that it cascaded halfway down model Fran Summers’ back. The extravagant creation was the handiwork of British milliner Noel Stewart, with whom Waight Keller first collaborated in 2017 when the pair were commissioned to create a headpiece for the Duchess of Sussex. Since then, Stewart has worked on Givenchy’s autumn 2019 and spring 2020 couture shows, the latter of which involved floor-skimming bridal bonnets.

Giambattista Valli and Sheridan Tjhung
More than 3,000 baroque pearls were used on each bridal veil at Giambattista Valli’s autumn 2020 show – with 3,000 cubic-zirconia crystals apiece for “diamond” styles. Both options were handcrafted at Sheridan Tjhung’s Perth studio, where the florist-turned-designer has been making her signature face masks for the likes of Billie Eilish, Grimes and Steve Lacy since 2018. Tjhung designed a pattern consisting of six sections, allowing the veils to rest securely on top of the head, before spilling into soft folds of pearls or crystals around the shoulders. HTSI
Ai Weiwei and me: the collector’s tale 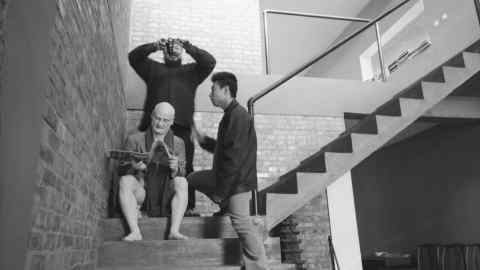