Huawei’s wearable tech has entered a market dominated by Apple, but its vice-president thinks it can compete in the US

Huawei has come a long way. Founded in 1987 by Ren Zhengfei, a former Chinese military officer, it has grown to become one of the world’s biggest telecoms companies. Last year it shipped more than 100m smartphones, a first for a Chinese business, and domestic sales grew to rival those of market leader Xiaomi. Now Huawei is jostling for a place in the vanguard of smartwatches, using Google’s Android Wear operating system.

The Huawei watch is its first attempt to steal a march in that market and to woo buyers in China and beyond. (In the second quarter of 2016, 3.5m smartwatches were sold worldwide, according to IDC Research, down from 5.1m the year before.) It has won plaudits for its design — traditional, with a stainless steel case, sapphire crystal and steel or leather straps — and held its own among rivals for specifications like its display.

“We believe the smartwatch is a very valuable part of wearables, and wearables are very important for connecting people to the network,” says Rico Zhang, vice-president in charge of wearables. “It is also part of our strategy. Huawei will put a lot of investment into the internet of things, and wearable devices are a most important part of that.”

The move brings Huawei, whose roots are in telecoms infrastructure, ever further into people’s homes and lives. In the first half of 2016, its consumer division created one-third of its Rmb245.5bn ($36.8bn) revenue, up from zero five years ago. Much of that has come from smartphones, of which it sold 60m in that period. Huawei’s ultimate goal is to unseat Apple and Samsung from the top of the global league tables in five years; its latest model, the sleek P9, is aimed at catapulting the company from its emerging markets base into Europe and elsewhere in the rich world.

Wearables also fit into Huawei’s views on profitability: “The closer to the human body, the higher the value of the device,” says Mr Zhang. For him, it is a matter of time before its smartwatch woos new users, who he says do not immediately accept new things and have high expectations. 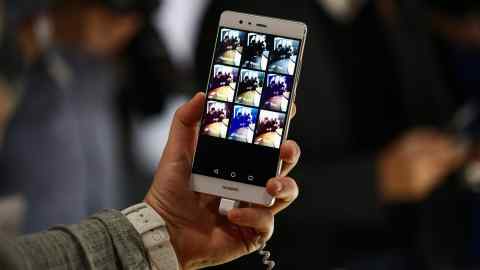 As happened in the early days of smartphones, there are imperfections in the products and advances to come — longer battery life, better connectivity, more autonomous use without requiring a phone to sync with — but Huawei, like its peers, is on the case. “It will get better and better,” Mr Zhang says.

Applications-wise, the company looked into the features people most looked for in a smartwatch. The answer, says Mr Zhang, was WeChat — the popular messaging service owned by internet giant Tencent — and social media. Huawei is counting on its apps, ecosystem and standalone connectivity to win over buyers and ultimately replace traditional watches.

Controversy over its ownership has hounded its US ambitions — in 2012 the US House intelligence committee claimed it “cannot be trusted to be free of foreign state influence”, claims repeatedly rejected by Huawei. The company has had more success in Europe.

Last year it recruited former BP chief executive Lord Browne to head a UK board of directors that will oversee British operations. It was a move aimed at dispelling international concerns over its governance and described by then-chief executive Ken Hu as “the latest illustration of Huawei’s commitment to openness and transparency and to continuing to build relationships of trust in the UK and across the world”. 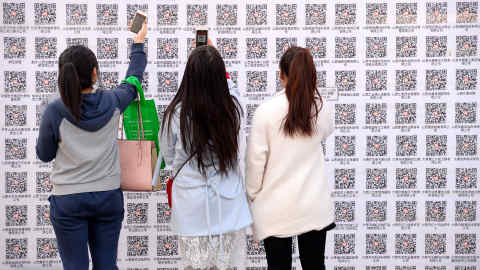 Huawei is not the only Chinese player hoping to break into the wearables market. Its rival Xiaomi, with its manufacturing partner Huami, has had a hit with a $15 wristband. The device tracks — with variable accuracy — heartbeat, steps and sleeping patterns. More than 24m have been sold in China since its launch in August 2014.

It is not a good start when you need to dial up a YouTube tutorial to take the watch out of the box, but put that down to its snug fit and a cushiony watch-rest. The watch, running on Android Wear, has a minimalist, masculine cut — big dial, clean face, metallic strap. (Six alternative designs are available and there are further “styles for ladies”.)

The 1.4in sapphire crystal face makes it almost scratch-proof, while screen resolution is a relatively high 400x400, at 286 pixels per inch. Preloaded graphics are a little cutesy, with kindergarten-style trees and mountains the backdrop to your daily step count, though colours are bright and clear.

It ticks off the important basics easily — accuracy, clear numbers for reading on the go and intuitive handling. The battery needed charging every night, but it swipes cleanly and easily — or at least until challenged by Hong Kong’s humidity and any sweaty exercise therein.