Virtual fashion: the next frontier?

Ten years ago, there was an episode of Black Mirror titled “Fifteen Million Merits”, where huddled masses furiously laboured in order to dress not themselves, but their idealised digital doppelgängers, in little hats. It seemed far-fetched, but was already fact. Metaverses — 3D virtual spaces — had already begun to emerge in chatrooms and computer games such as The Sims and World of Warcraft, populated by avatars. And they all had to wear something.

It’s a strange notion: clothes that don’t exist, for people who aren’t real. But fashions that exist purely digitally have been around for a while, albeit restricted to online platforms such as IMVU and Second Life. The latter, founded in 2003, is a world rather than a game, with no set objectives, a virtual space for socialising, and shopping.

Second Life’s economy is based on user-generated content. Residents create items such as hairstyles, toenails and skin tones, which are sold for Linden dollars — the platform’s in-world currency — and can be “cashed out” to US dollars. During 2020, $73m was paid out to users.

Clothing across these metaverses generally looks similar. Pieces reference real-life high fashion, sometimes blatantly ripping it off, with the kind of varying success and audacity you see in most counterfeit markets. A user of The Sims recreated the newspaper-print Christian Dior dress famously worn by Sarah Jessica Parker on Sex and the City in 2000. In Second Life, there are also precise digital recreations of Bottega Veneta’s Arco bag, Balenciaga’s arch-bottomed Hourglass and Prada bucket hats dotted with Triangle emblems.

The next step is official brand endorsement — labels creating digital content, and charging for the privilege of wearing an imaginary logo. The Nintendo game Animal Crossing: New Horizons captured the fashion imagination last summer. Maison Margiela 6, Valentino and Marc Jacobs contributed looks for the game’s approximately 30m players to download and dress up their characters, a community of anthropomorphic animals.

Where next for digital fashion? The answer could, perhaps, lie with DressX, a two-year-old start-up that offers “digital-only collection” — meaning non-existent clothes, realised by both traditional and 3D designers and available to add to photographs of real-life people. The resulting images can then be uploaded to social media. According to founders Daria Shapovalova and Natalia Modenova, it is “a substitute for buying physical clothes solely for content creation.” Their backgrounds are in fashion — they headed Mercedes-Benz Fashion Week in Kyiv, Ukraine — but their base in California and a fascination with augmented reality and digital spheres lead to the concept for DressX. The idea is also tied to current concerns around fast fashion, and the industry’s cycle of consumption and waste — a 2015 study by the charity Barnardos indicated that garments are worn on average seven times before disposal, contributing to an estimated 92m tonnes of annual textile waste globally.

Other companies have explored this space: The Fabricant created digital clothing for avatars, collaborating with the likes of Adidas and Tommy Hilfiger; Scandinavian fast fashion label Carlings devised digital clothes to be uploaded to “dress” people in photographic images. But the interface of DressX is slicker, simpler.

The designers at DressX aren’t (yet) that famous — there’s no Dior, no Chanel. The most familiar name is probably Gary James McQueen, the nephew of Lee Alexander McQueen, who was responsible for some of the late designer’s textiles, and whose clothes are similarly theatrical, tinged with historical references to Victoriana and Tudor. The other well known names are those of artists — images by Van Gogh, Cézanne and Monet applied to sweatshirts. A Monet “digital cotton” sweatshirt is $25 while a non-existent Gary McQueen gold dress will cost you $350 to digitally apply to a photograph.

Yet investors seem to have faith that people will pay. In July, DressX raised $2m in a seed round, and launched an app earlier this summer, aiming to further simplify the process of users buying an image of a dress rather than the dress itself. A revolutionary, resource-saving utopian alternative to consumption, or the ultimate cynical reflection of an image-obsessed dystopia? Only the future will tell.

Explore the series
READ MOREArt of Fashion
Virtual fashion: the next frontier? 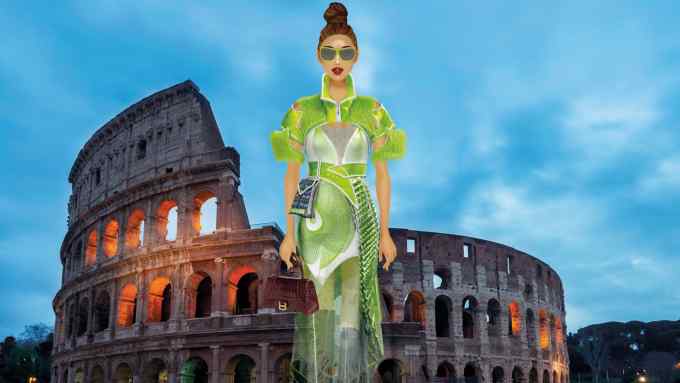