Eritrea replies to Ethiopia’s olive branch with envoys to Addis

Hope of ending neighbours’ 18 years of ‘no war, no peace’ rest on delegate’s shoulders

When Abiy Ahmed, Ethiopia’s prime minister, accompanied by Olympic athletes and pop stars, personally welcomed an Eritrean delegation at Addis Ababa’s international airport last week it showed how much he felt was at stake.

The group including Osman Saleh, Eritrea’s foreign minister, and Yemane Gebreab, one of President Isaias Afewerki’s closest advisers, were leading the country’s first political representation to Ethiopia in more than two decades.

The neighbours have been in an state of “no war, no peace” since the end of a two-year war in 2000 that left tens of thousands of people dead and the border between them in dispute. But last week’s delegation from Eritrea, one of the world’s most reclusive and repressive regimes, was a response to Mr Abiy’s unexpected overture to end the conflict.

“Our desire is to love rather than hate,” Mr Abiy said at a state dinner he hosted during the envoys’ visit. “What we miss is to hug our brothers in Asmara. If we are in love then the other things are minor. And if we do that, we might not need a border.”

He also promised to resume Ethiopian Airlines flights from Addis Ababa to Asmara, Eritrea’s capital, after a 20-year hiatus.

Mr Osman responded equally effusively. “Today is a day of joy because two identical peoples and two generations have been separated throughout that period,” he said. “But through struggles, we have opened the door of peace.”

The meeting has lifted hopes of putting an end to one of Africa’s longest bilateral disputes, which has spilled into the international arena, and of easing tension in the Horn of Africa, one of the continent’s most volatile regions.

If you see the rise of a dynamic young leader [in Ethiopia] changing the region, that sends jitters through a regime like the one in Asmara

Ethiopia has occupied land in violation of the cessation of hostilities agreement known as the Algiers Declaration. Meanwhile Mr Isaias has used the so-called national security threat posed by Ethiopia to justify repression: lifetime national service and years-long detention without trial are common and there is no independent media.

The brutality has contributed significantly to Europe’s migration crisis, with 52,000 Eritreans fleeing the dictatorship in 2016 alone, according to the UN.

Until Mr Abiy became Ethiopia’s prime minister in April the tension appeared set to fester. But in his inauguration speech Mr Abiy offered an olive branch to Eritrea and followed that by promising to abide by the Algiers Declaration, which would involve withdrawing from the disputed territory. Mr Isaias responded by sending the delegation.

Mr Abiy’s motives are relatively easy to understand, according to Ahmed Soliman of Chatham House in London. “Regional integration is becoming an important driver for Abiy and this is definitely an important part of it,” he said. “It’s very clear Abiy wants to reposition or at least move on, not only dealing with Ethiopia’s internal issues but engage externally within the region.”

Access to more ports for the landlocked country, which is largely dependent for international trade on the increasingly obstreperous Djibouti, is another reason for the 41-year-old prime minister to engage with Asmara.

Mr Isaias’s motives are harder to read because peace would eliminate his justification for ruling as he has for the past 27 years.

Rashid Abdi, the Horn of Africa director for the International Crisis Group, a Brussels-based think-tank, said Mr Abiy’s decision to open up Ethiopia’s authoritarian system of government could well be resonating with the Eritrean dictator: “If you see the rise of a dynamic young leader changing the region, that sends jitters through a regime like the one in Asmara,” he said. “The impact of Abiy’s positive reforms could have repercussions for Isaias.”

The Eritrean leader is also under pressure from the diaspora, who are refusing in increasing numbers to pay the taxes he demands in return for consular services. But the true state of the economy is hard to gauge; the International Monetary Fund has not issued a report on Eritrea for more than seven years because of, it says, the “lack of adequate information”. 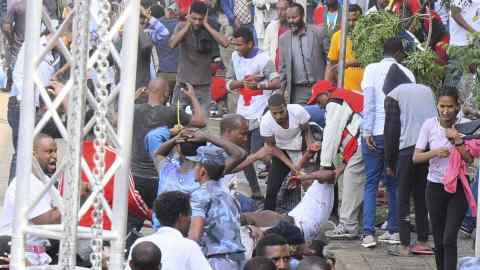 Hallelujah Lulie, a regional security analyst based in Addis Ababa, said the “big question now” is whether Mr Isaias would open up. “Perhaps he will reach out to the reformist elements in the ruling party,” he said. “If he follows that path he may find a compromise between transition and continuity.”

Achieving lasting peace was likely to be a “long, drawn-out process”, Mr Abdi predicted, citing “strong domestic opposition” in Ethiopia, particularly among communities in Tigray, which borders Eritrea. “The military are likely to be wary and many people in the border region will want reparations and compensation for moving.

“And Eritrea is not a country that has a reputation for making quick deals. They’re very cautious.”

But Mr Hallelujah said the Ethiopian prime minister was likely to leverage “Abiymania”, the mass popular support he has generated for his reform programme, to his advantage.

“Unless something disastrous happens, I think the strengthening of ties will continue and this will redraw the geopolitical map of the region,” he said.