Why is there no US rival to compete with Huawei?

The UK’s decision to allow Huawei to supply equipment for its 5G networks has disappointed officials in Washington. But it has also reignited a debate at the top of the administration: why is there no US rival to the Chinese company?

American diplomats have been warning US allies of the danger of using the Chinese company’s telecoms equipment, which they say could be used by Beijing for spying. But they have been unable to recommend or support a US company to step in and provide the same equipment instead.

“The White House keeps asking why we can’t do what Huawei does, and how long it would take for us to be able to do so,” said one US telecoms executive. “They don’t seem to understand — we gave that capability up a long time ago.”

Huawei is the world’s biggest telecoms equipment maker, with a 28 per cent market share — according to Dell’Oro, the market research company — and more 5G contracts around the world than any other company.

Its closest rivals are Ericsson and Nokia, the European companies. But there is no US group that can build the equipment to transfer signals between mobile phones and the towers or sites that make up the network.

“This is a serious problem, and one that we probably engineered over a long period of time,” said Robert Mayer, senior vice-president of cyber security at the industry group US Telecom. “Now that Huawei has captured the level of market share they have, and with more recognition of the security concerns that poses, a lot of people are asking, ‘How did this happen?’”

In the early days of landline telecoms, the US was dominant, with companies such as AT&T, which was the successor to the old Bell System monopoly, providing network equipment to countries around the world. Bell Labs, the research arm of the old monopoly, was known as “the idea factory”, reflecting the pre-eminence of US telecoms innovation.

Video: Tech Wash: why the US can't compete with Huawei

“US vendors got very powerful and strong in the old landline world,” said Dan Hesse, a former chief executive of Sprint and before that of AT&T Wireless. “But because of that, it was difficult for them to make the change aggressively and quickly enough towards the mobile and internet future.”

Industry veterans say that supremacy disintegrated because of choices made during the 1990s, both by government and the companies themselves.

In 1996, the US passed a Telecommunications Act, which prompted a flurry of new entrants into the market.

But some say the battle that followed left large US telecoms equipment makers — such as Lucent, which was spun out of AT&T and included Bell Labs — financially stretched, and the market as a whole fragmented.

Tom Lauria, a telecoms analyst and former director at Lucent, said: “After the Telecoms Act of 1996, we had a massive number of entrants into the market. To keep them going, we would finance almost everything they bought until they became mature enough to pay the money back. This was not a sustainable model.”

Others point out that the 1996 act allowed companies to develop and use their own network technologies, while in Europe companies all agreed to use GSM, which became the worldwide standard for mobile communications.

At the same time, said Mr Lauria, companies such as Lucent were also looking to sell into the fast-growing Chinese market, helping keep revenues afloat, but also sewing the seed for China’s eventual domination.

“Whenever we sold to the Chinese, they would demand that we manufacture locally and that we hand over the technology to our Chinese partners,” he said. “Western companies needed the revenue growth, and that meant we had to play by their rules.”

ExplainerHuawei Technologies
What are the security risks of using Huawei for 5G? 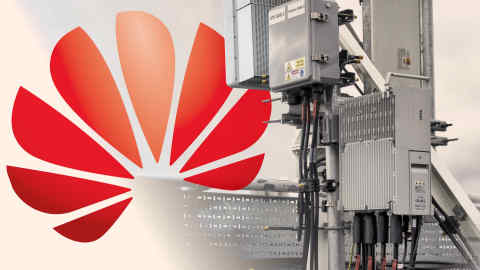 In the end, Lucent was bought by France’s Alcatel in 2006. Nokia Siemens Networks bought Motorola’s network infrastructure division in 2011, before going on to purchase the combined Alcatel-Lucent in 2015.

Until recently, what some in the sector see as a commercial failure by US companies was not a political problem. But with the imminent roll-out of 5G, many in President Donald Trump’s administration are worried that the US will fall behind further.

As a result, some are promoting unlikely solutions, such as getting the US government to develop and build 5G networks instead.

“To get to 5G in America, you need to go to the defence department,” Newt Gingrich, the Republican former speaker of the House of Representatives, recently told a conference in Washington.

Others, however, are urging Mr Trump to accept the reality that much of the world’s 5G equipment will be built outside the US, and to compel allies to use European products rather than cheaper Chinese ones.

“The cost of replacing an entity on the scale of Huawei would be prohibitive,” said Mr Mayer. “The genie is already out of the bottle.”

Get alerts on 5G networks when a new story is published