One of Australia’s largest mining companies has unveiled a plan to spend more than $6bn by the end of the decade to hit its net zero emissions targets.

Fortescue Metals Group, one of the world’s biggest producers of iron ore, made the commitment in New York as part of Joe Biden’s First Movers Coalition and the UN Global Compact.

The commitment sets a benchmark for investments heavy industry needs to make to reach net zero, according to billionaire Andrew Forrest, Fortescue founder and executive chair.

The company has been among the most vocal about the need for the mining sector and heavy industry to reduce carbon emissions. It has established a separate unit — Fortescue Future Industries — to invest in renewable and hydrogen technologies that can be applied to its own operations and developed as separate businesses.

Forrest argued that eliminating the use of fossil fuel at Fortescue’s mines by converting vehicles, including enormous trains, to hydrogen would reduce operating costs by $818mn a year from 2030. He said cumulative cost savings would reach $3bn by the end of the decade, with its investment paid back by 2034 based on current market prices for fossil fuels.

“We smoke $2.5bn plus of fossil fuels into the atmosphere every year with nothing to show for it,” he told the Financial Times in an interview in New York.

Forrest described the $6.2bn investment, separate from the FFI unit’s spend, as “very fiscally responsible” and “conservative”, based on a projected rate of return that would rise from 14 per cent to 25 per cent over the course of the project.

Forrest has fought sceptics over his regular calls for heavy industry to invest more in hydrogen technologies, as his own group has not yet proven results from the push into the technology. “We’ve got cash in the bank that’s greater than this whole investment. It’s not a risk,” he said. He added that the investment would reduce regulatory risk and the cost of being exposed to the global energy market.

The miner remains under scrutiny over its FFI investments, which have included the acquisition of the former battery technology arm of the Williams Formula One racing team and a variety of renewable energy projects. It said it would detail how it will invest the $6.2bn earmarked for its mining operations in the coming years.

The scale of the investment required to transform the mining industry is enormous. Rio Tinto, which mines iron ore in the Pilbara region of Western Australia alongside Fortescue, said last year that it would spend $7.5bn to halve its carbon emissions by 2030, but the commitment put pressure on its shares.

Hydrogen — Fantasy or fuel of the future?
Mining mogul Andrew Forrest doubles down on green hydrogen 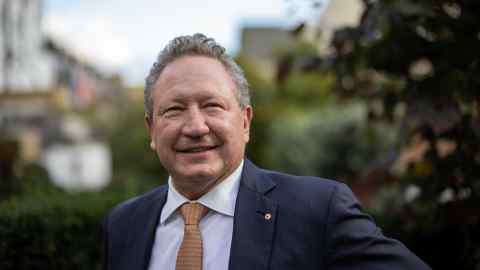 Forrest has argued that the mining sector has potentially the most to gain from decarbonising its operations and acting as a test bed for new energy sources and technologies.

The billionaire — who has been in talks with White House officials in recent days — said he believed Fortescue’s investment and cost savings would put pressure on other chief executives of heavy industries to make bolder commitments to net zero. “That worm is going to turn,” he said.

Australia has adopted new climate change targets since the election of the Anthony Albanese-led Labor government in May. Chris Bowen, the environment minister, has travelled to the US to participate in the UN forum, as Australia, which is economically reliant on fossil fuels and mining, looks to take a stronger position on climate change.