Why the UK’s NHS leads the world in managing diabetes

Does mix of innovation and continuity of care make type-2 eradication a ‘realistic’ ambition?

While the UK’s taxpayer-funded National Health Service suffers its share of criticism, its approach to the management and prevention of diabetes is widely recognised as world-leading.

Single-payer systems such as the NHS tend to perform well when it comes to the management of chronic diseases. In contrast to insurance-based provision, where people may move between providers every few years, compromising continuity of care, the NHS generally cares for its patients without interruption — and free of charge — for a lifetime.

This, in turn, creates the conditions in which a chronic disease such as diabetes can be effectively monitored and managed.

Jonathan Valabhji, a consultant diabetologist who combines his work as a doctor at London’s Imperial College Healthcare NHS Trust with his role as national clinical director for diabetes and obesity in NHS England, says the concept of free healthcare for all at the point of need “is particularly well suited to chronic diseases, and in some respects diabetes is the classic chronic disease. Once you develop it, most people will have it for the rest of their lives.”

The numbers underline the scale of the challenge facing the NHS. Statistics issued last month by NHS England show that almost 2m patients registered with a GP have non-diabetic hyperglycaemia, a condition which puts them at high risk of developing type-2 diabetes, the form of the disease linked to lifestyle.

Dr Valabhji says estimates suggest that about 10 per cent of the entire annual NHS budget is now being spent on people with diabetes. “So it has a significant impact on the sustainability of the health system moving forward.”

As a clinician, he is now diagnosing people at earlier and earlier ages. Since many of the complications that accompany diabetes, such as eye, kidney or foot disease, increase in prevalence the longer someone has the condition, this in turn “has a big potential impact within the health service in the decades to come”, he points out.

To tackle this seemingly unrelenting tide of current and prospective cases, the NHS has worked to incentivise doctors to focus on treating the condition.

Since 2003 about 15 per cent of GP income has been related to delivering specific aspects of care. Of that, “a significant proportion” is focused on diabetes care, Dr Valabhji says, “which I think has had an important impact on the quality of care across the country”.

At the same time the NHS established a national diabetes audit, to track the effectiveness of care of patients, not only with type-2 diabetes, but also with type-1, an autoimmune disease that is not susceptible to lifestyle changes.

Perhaps its most far-reaching initiative is a national diabetes prevention programme that is the biggest of its type in the world and to which more than half a million people have been referred since it was established in 2014. By 2023-24 up to 200,000 people a year are expected to participate.

One of the innovative approaches that the NHS has adopted reflects recent evidence that limiting people’s dietary intake to just over 800 calories a day for three months can cause significant weight loss. Strikingly, in the case of people recently diagnosed with type-2 diabetes, the condition can actually be put into remission.

The NHS has also been at the forefront of exploring digital interventions to help overweight or obese people lose weight in order to prevent type-2 diabetes or to lessen the impact in those already diagnosed with the condition.

Among those whose innovations have been taken up the by NHS are Chris Edson and Mike Gibbs, two young engineers who set up a company called Second Nature. It uses a blend of technology — such as “smart” weighing scales linked to an online app — and professional and peer support to help people make the lifestyle changes that can ward off diabetes.

Second Nature has recently been accepted as a national provider for the diabetes prevention programme. Crediting the NHS’s “forward-thinking” approach, Mr Edson says: “There aren’t many health organisations in the world that have put their neck out and said, ‘yes, we believe that digital has the outcomes for diabetes prevention and management and we’re going to commission it nationally’.”

His company’s clients, he says, are people “in the risk zone for diabetes. Our programme is to get them out of the risk zone.” Separately it also offers a programme aimed at putting people who already have diabetes into remission.

“We help them make such drastic lifestyle changes that they actually [no longer meet] the diagnostic criteria for type-2 diabetes and they come off all of their medication,” he says. Data it has recently published in a professional journal show that it has achieved this feat in 40 per cent of cases, he adds.

Within five years, we’d like to eradicate type-2 diabetes within the UK

About 5,000 NHS patients have already gone through the programme, for which people can also choose to pay themselves without a doctor’s referral.

Mr Edson has a striking ambition for Second Nature, which recently raised $10m in a venture capital funding round: “Within five years, we’d like to eradicate type-2 diabetes within the UK. Combined with other initiatives that the NHS is doing, I think it’s a realistic goal.”

Meanwhile Dr Valabhji is awaiting data on the impact of the national diabetes prevention programme nationally, confident that it will show a reduction in the rate of growth in diabetes cases in England.

Results so far “are extremely encouraging and I think it will be around 2021 that we’re able to show an impact on the trajectory of type-2 diabetes incidence,” he says. 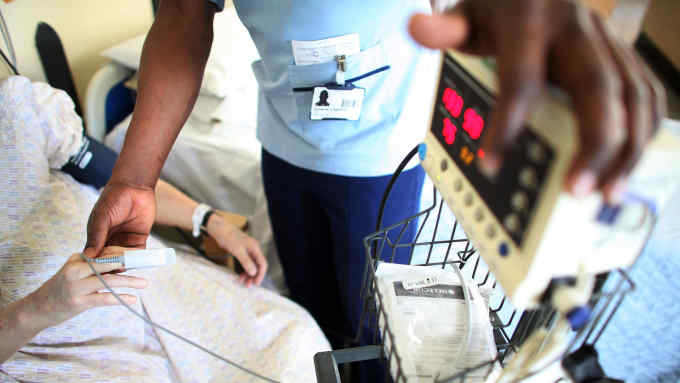