Those were the words Victoria Beckham used to describe her Autumn/Winter 2020 collection, unveiled beneath the crystal chandeliers and Rubens-painted ceiling at the grand Banqueting House in Whitehall on a soaked Sunday morning.

But there was nothing gently rebellious about these clothes. They were elegant. Tasteful. Conservative. Bourgeois, as recently redefined by Hedi Slimane at Celine, with a perfectly executed tobacco-coloured trench with crescent-cut sleeves, structured black dresses with necklines scissored in the shape of urns, and hip-grazing blazers paired with high-necked silk blouses and pleated skirts in stiff grey tweed. They evoked a woman with a diary divided by board meetings, client dinners and the occasional weekend on horseback — one who values versatility and discretion. (If only the models had worn shoes as sensible, instead of the difficult over-the-knee platform boots they teetered back and forth in.)

Beckham has been a major proponent of the midi skirt for the past half-decade, but shorter lengths feel right for now, she said. Skirts were hemmed to the knee and full-length trousers were swapped for culottes sliced just below mid-calf. Last season’s celebratory colour combinations — violet and burgundy, seafoam and camel, pale butter and strong mint — gave way to a dark, predominantly monochrome palette: black, navy, ivory, slate.

Monochrome clothes sell, and it’s tempting to draw a link between the collection’s conservatism and Victoria Beckham Ltd’s own finances. The company has operated in the red since its founding in 2008, and losses are deepening as sales decline: Pre-tax losses amounted to £12.2m in the 2018 financial year from £10.3m the year before, according to Companies House records filed in November. Revenues declined 16% year-on-year to £35.1m, which the company attributed to a drop in wholesale demand from international stockists.

Victoria Beckham Ltd sold a £30 million minority stake to Neo Investment Partners in 2017 as part of a plan to shift focus to direct-to-consumer selling, geographic expansion (namely to Asia) and cost cuts. The plan hit a bump when Paolo Riva, the company’s CEO of 10 months, parted for “personal reasons” in July; the managing director of product, Marie Leblanc de Reynies, was promoted to replace him.

The company is expanding into new categories beyond ready-to-wear, including eyewear and make-up. Following a successful collaboration with Estée Lauder in 2016, Beckham launched her own cosmetics line with an emphasis on skincare in September. It is sold only through Beckham’s own channels — a challenging proposition despite Beckham’s 27.8m Instagram followers, given rising customer acquisition costs and the lack of marketing support that would be typically afforded via wholesale partnerships with major retailers.

Still, moisturiser is easier to sell than £1,000 dresses, and Beckham’s backers are likely pinning their hopes of growth and profitability there.

“I’m really focusing on make-up,” she continued, before adding: “And fashion as well.”

Follow @financialtimesfashion on Instagram to find out about our latest stories first. Listen to our culture podcast, Culture Call, where editors Gris and Lilah dig into the trends shaping life in the 2020s, interview the people breaking new ground and bring you behind the scenes of FT Life & Arts journalism. Subscribe on Apple, Spotify, or wherever you listen. 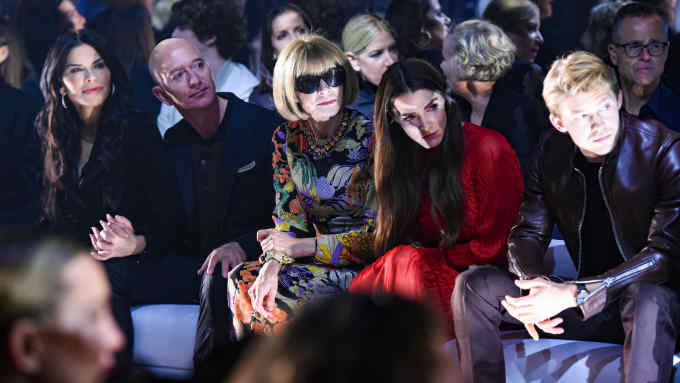