Working on the Dior exhibition, newly opened at the V&A and already sold out, has proven fertile ground for the brand’s director of womenswear Maria Grazia Chiuri. This season she had been inspired by one the UK’s ancient subcultures — the Teddy Girls of the Fifties — whom she has come to know through visiting the city, where she now has a flat.

But she had also used the exhibition, and its staging, as an opportunity to reflect on Dior as a brand, and on the culture at the house. “Dior is a more corporate brand than many,” she said of the LVMH-owned company shortly before the show. “But sometimes it’s less clear what exactly the Dior brand might be. It’s a house which has had very different designers [there have been seven] and each has brought a very different style.”

Seeing the work of individual designers — among them John Galliano, Raf Simons and Yves Saint Laurent — showcased at the V&A had only emphasised their differences. But other exhibition rooms, dedicated to broader themes at the house — the garden, the showstopper, the princess gown — had helped Chiuri identify its codes. The Teddy Girl duster coats, tartan skirts and patent jackets in her AW19 show, may have taken their cue from an underground movement adopted by the British working classes, but the real thrust of this collection was in Chiuri’s reimagining of the circle skirts, bar jackets and dove grey tailoring designed by the brand’s founder during that same period.

If Chiuri has created a design signature at Dior it has been in making the house favourites work for the modern day. Heavy wool skirts are now lighter and more fluid, and she has replaced stiff organzas with cotton. The Bar jacket, with its sculptural peplum waist has been made less stiff and formal. And the sequin fairy skirts are more ethereal as well. For AW19, the “corset” had been remade as a wide leather belt with elasticated panels, while the little fitted tops of Fifties debutantes were remade as black sweaters and adorned with a knitted bow. The looks were sparked with Teddy flair — a leather biker jacket, a stripy sweater, a pair of tartan culottes — but in the marriage between subculture and sophisticate, the sophisticate held the upper hand.

There were a lot of looks, and a lot of it wasn’t very thrilling — but then I’m pretty sure it isn’t designed to be. Chiuri’s Dior is preoccupied with clothes that reflect real life, designs that are comfortable and wearable. Backstage, she spoke of the importance of dressing to suit your personality, rather than having a look imposed on you by a designer, and her collections are designed with Everywoman in mind: albeit an Everywoman who can buy a thousand-pound handbag and might have need for calf-length sequin skirts.

Another Chiuri signature has been to highlight the world of female creatives and feminists in her work. This show’s first look featured a T-shirt printed with “Sisterhood is Powerful”, from the 1970 book by author and activist Robin Morgan. Pictures of naked women posed as letters of the alphabet by Bianca Pucciarelli Menna, the Italian artist better known by her male alter ego Tomaso Bingo, lined the walls. As a platform to promote equality and empowerment, Chiuri has one of the biggest in fashion. And as an endeavour, it’s honourable, earnest and inarguably right on.

Some designer want to tell a story — to transfer you to a different world, to make you dream. Chiuri’s collections are rooted in reality. Even though there were lots of elements going on here, the collection didn’t take me very far at all. It was, dare I say, a trifle dull. But then again, in retail, there’s an expression called “wardrobing” which describes brands that cover lots of categories — shoes, bags, coats, dresses — and do those items very well. Chiuri’s Dior is very “wardrobey”. It’s stuffed full of product, and highly wearable. While it’s not always thrilling, it’s sure going to sell. 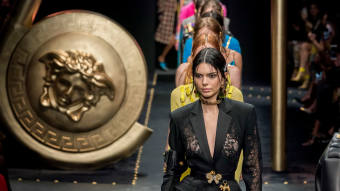