Sign up to myFT Daily Digest to be the first to know about Volkswagen AG news.

The Zafira, a family car sold by the European arm of General Motors, has come under fresh scrutiny for its emissions performance in the wake of the Volkswagen diesel scandal.

GM’s Opel division said it had been made the subject of “false accusations” after a report by Belgian broadcaster VRT claimed it had been secretly modifying the emissions performance of its cars using unexplained software updates since the VW scandal emerged in September.

The Germany-based manufacturer said: “Opel clearly rejects the claim of VRT News that Opel dealers have been modifying software in the Zafira Tourer 1.6 [litre] diesel which changes the emission behavior [sic] of these vehicles. The mentioned service update . . . has nothing to do with changing emission levels.”

The report came as global carmakers are under the spotlight following the revelation that VW installed so-called defeat devices in half a million cars in the US to trick laboratory testers into thinking the vehicles were cleaner than in reality.

Mass-market rival Renault was on Monday facing representatives of a French government commission to explain its own emissions performance, after investigators raided several of the carmaker’s offices this month. The revelation of the visits by the authorities sent Renault’s shares down by 10 per cent on Thursday, though both the company and members of the government said there was no evidence of illegality.

VRT on Monday aired a news item in which British and Flemish experts tested two Zafira cars with diesel engines complying with the latest “euro 6” standards.

The Belgian broadcaster said that, under a test closely matching the official laboratory regime, the cars emitted nitrogen oxides — the collective name for diesel pollutants — at five and nine times the EU limit of 80mg of Nox per km.

Following a software update carried out by a local dealership alongside a routine service, the cars’ emissions performance improved, producing Nox at 2.8 and 2.5 times legal limits. Undercover footage appeared to suggest mechanics believed the software was designed to improve emissions.

Opel said the fix was related to a diesel exhaust fluid controller sending out the wrong signals, falsely illuminating a warning light. Only 309 vehicles in Belgium were affected by the service update, it added. 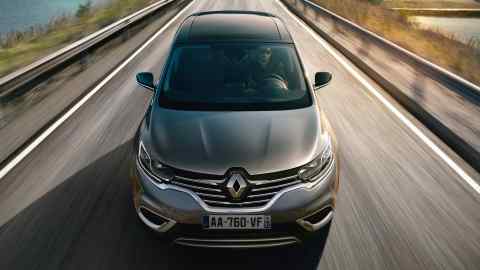 The research was carried out for VRT by UK testing company Emissions Analytics and the Thomas More university in Belgium. “The suspicion is, they’re making some emissions updates quietly,” Nick Molden, head of Emissions Analytics, told the Financial Times. “It may be that there is no illegal action here but there would still be some important questions to answer.”

Opel said it had openly discussed the software update with the German motor authority.

It was not the first time the Zafira, which began production in 1999 as one of the first seven-seater “people carriers”, has come under scrutiny. Researchers in Switzerland working for German campaign group DUH said in November the car had been found to have emissions up to 17 times higher than the current euro 6 limit, despite passing official tests.

Opel, which has repeatedly stressed it does not deploy software that recognises an exhaust test scenario, said it had retested the model and the values complied with “legal limits”.

Get alerts on Volkswagen AG when a new story is published