Why now is the worst time to start a divorce

If Jeff Bezos was getting divorced in the UK, he would have just made one hell of a tactical mistake — one that, assuming he has to transfer an awful lot of Amazon shares to his soon-to-be ex wife, would have cost him many millions of dollars.

The mistake? Deciding to get divorced after Christmas. He wouldn’t have been alone, of course. The stress of an imperfect two weeks with a spouse you don’t find quite as entrancing as you once did is the obvious reason to get started in January and a good 40 per cent of marriages end in divorce one way or another. Lawyers have labelled January 7 as Divorce Day in the UK.

But here’s the thing. Tell the world you can’t stand your spouse any more in January and there are fewer than three months left until the end of the tax year. You will think that should make no difference. I’m afraid it does.

When you are married you can transfer assets back and forth between yourselves with no consequences whatsoever. When you are not, you cannot: every transfer attracts capital gains tax (CGT) to the notional gain made by the transferor. When you are in between marriage and divorce something in between happens. You have until the end of the last tax year in which you lived together to transfer assets CGT-free. After that the concession goes.

Let’s say, for example, that you own a second home. You transfer it (reluctantly) to your spouse as part of your settlement. It is worth £50,000 more than when you bought it. Hand it over before the end of the tax year and that’s no problem. Do it after and (assuming you have used up your £11,700 allowance already) you will pay 28 per cent CGT on it, residential property attracting a rate eight percentage points higher than other assets.

Family MoneyLucy Warwick-Ching
Can you ever have a ‘good’ divorce? 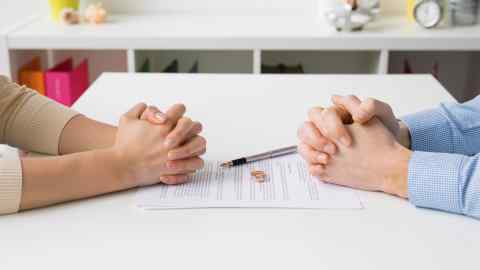 To make matters worse, says Sarah Coles of Hargreaves Lansdown, for these purposes, “living together” doesn’t just mean living together, it means living together and liking it. If you split up but continue to live in the same house as you go through the process, say because it is too expensive or impractical to move, your physical proximity doesn’t count.

Once you have a court order, a deed of separation or any circumstances that suggest your split is forever, you are “on the clock” to at least get your settlement sorted and assets transferred before the end of the tax year. The richer you are, the more of your wealth will be tied up in non-liquid assets and the more this will matter.

Back to Mr Bezos. Let’s say he had to hand over $40bn of Amazon shares in the UK at some point after April 6. Bad timing could cost him $8bn, or 20 per cent. Nasty. The rest of us might not be quite as much at risk (if only). But it is worth noting that the average age of divorce — 46 for men and 44 for women — coincides neatly with that at which people really start to build assets as a result of both reaching their peak earnings and inheriting.

I particularly dislike the UK’s capital gains tax. That’s because it isn’t indexed to inflation, which means it is an effective tax on wealth rather than one on real gains. So I wish I could tell you that the above is the end of your CGT troubles should you be getting divorced, but it is not.

Almost worse is the case of the family home. Separate and one of you will surely want to move out. In the past, that worked. You had 18 months to get shot of your main residence once you had vacated it before CGT became an issue. The final period of ownership counted for the full principal private residence exemption regardless of whether you lived in the house or not.

Last year’s Budget proposed cutting this to nine months. That would always have been tricky in the UK, home to some of the world’s slowest property solicitors. In today’s markets, barring full price capitulation on the part of the seller, it’s verging on impossible. Hello to a 28 per cent charge on any gains made after the shorter exempt period (should there be any) on at least one party’s share of the largest asset most families have.

So what can you do? The first bit of advice here is a statement of the blindingly obvious. Have another go at staying married. The best way to save money in a divorce situation is to change your mind. (This thought, just to be clear, does not extend to my views on Brexit).

If you can’t do that, and you know you aren’t going to be amicable enough to make the transfers before your divorce is final, the next obvious bit of advice is to pretend you can — at least for the next few months. It is way better to give yourself some extra time by starting the process of getting divorced in April than in January. You know those tax-savvy friends of yours, who look a bit tense but haven’t mentioned divorce? Perhaps they will on April 6.

The first bit of advice here is a statement of the blindingly obvious. Have another go at staying married. The best way to save money in a divorce situation is to change your mind

It is also worth noting that the government, assuming it isn’t too distracted, is to give its response to the no-fault divorce consultation by March 8. This could change the rules, making everything faster and easier. At the moment, if you want to get a divorce through in less than two years, the break-up has to be someone’s fault. This is why most divorces in the UK happen on the grounds of unreasonable behaviour. Figuring out who to blame is an almost certain route to acrimony and legal costs.

Next, don’t move out of your primary home until its fate is clear, however much you want to (assuming your spouse has not sought an occupation order to push you out). Divorce is going to be miserable for you and your children. It’s also going to make everyone poorer, so why pay extra taxes and make that bit worse than it needs to be?

Finally, if you aren’t getting on with your spouse, he or she has a lot of inherited wealth and also suddenly suggests you move to Scotland, be wary. There, inherited wealth is not taken into account in divorce settlements. No transfers necessary.